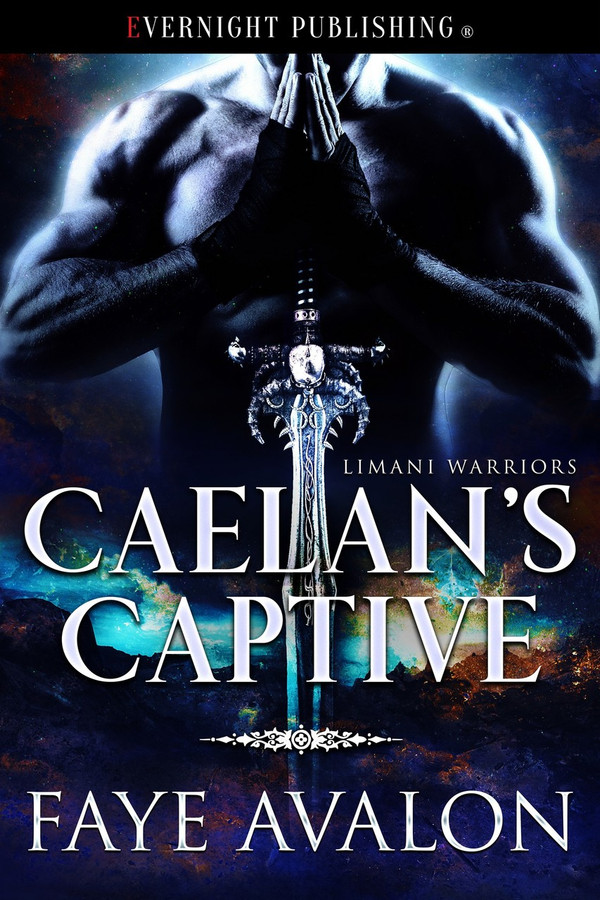 Escaping the king’s harem, Lahna finds herself at the mercy of a warrior prince who holds her captive and makes no secret of his desire to have her. Lahna hasn’t fled from one tyrant only to become the captive of another, and she certainly has no intention of warming the bed of the fearsome prince … even if he does make her body burn and her senses reel.

Caelan suspects his voluptuous captive may have been sent to spy on him and discover his plans to liberate his land from the tyrannical rule of the king. But her arrival provides him with the perfect opportunity to set those plans in motion. First, that means making her his, and in doing so he might just satisfy the craving for her that heats his blood and fires his loins.

But can Caelan really trust her? And can Lahna trust him to keep her safe when it matters most?

He had markings on his skin, the type that were forbidden by the king. What looked like intricate black ribbons circled his muscled upper left arm. He also had scars along his right arm, the kind made by weapons of battle.

He caught her staring at him and she looked away, sipping at the water again.

“You find something of interest?”

She swallowed before glancing back at him. “You are not what I expected.”

His expression darkened and a tension moved into his big body. “Indeed. And what did you expect?”

At the coldness in his eyes, Lahna reached for her inner strength and all the bravado she could muster. “You wear the marks of battle and your hair is long.”

His gaze held hers, searching for some hidden answer for which she didn’t know the question. Then he leaned closer. “Before anything else, I am a warrior. You would do well to remember that.”

She pushed her head back into the pillow as he leaned farther down. When her stomach pitched again, she wondered at the wisdom of eating too much bread. Except this feeling didn’t feel like over-indulgence.

Only when he straightened did she breathe once more.

“What is the name by which you are known?”

What kind of game was he playing? Of course he knew her name. “Lahna,” she sneered, lifting her chin.

He said nothing, but narrowed his blue gaze directly at her.

She wouldn’t be intimidated. “How long am I to remain here?”

Pointedly, he looked around him. “Do you see locks on the doors? Bars on the windows?”

No, she didn’t, come to think of it. At least, none that were visible. But was it a ploy? Was he trying to lull her into feeling secure and then he would pounce? She didn’t trust him. Couldn’t afford to trust him.

“There are more ways to imprison a woman than with locks and bars.”

“Why would I want to imprison you?”

Was he genuinely trying to provoke her? “That’s why I’m here, isn’t it? I’m little more than your prisoner, your captive. I appreciate you letting me regain my strength before I face my fate, but I would prefer to have an indication of what to expect when I am back to full health. What is to be done with me?”

“Now why would you expect that I intend to do anything with you?”

Infuriating man. He was toying with her like an animal trapped in a snare.

“I am in your quarters, am I not? Why am I here if not to be punished in some way?”

“May I remind you that you sailed into my waters uninvited? Had I not plucked you out of the reef, you would now be food for the fish.”

Sailed into his waters? Uninvited?

Everything inside her grew warm. Had she truly made it out beyond the horizon to where she had heard people lived freely? Unencumbered by the king’s tyrannical rule?

Her heart began pounding with joyful relief at the thought she might be free. But if that were so, where was she? This man spoke the same language, ate the same foods.

Maybe it was a trick and the king had meant to test her, find out why she had tried to escape. Had he tasked her guard to ingratiate himself with her, to learn of her plans, her reasoning? To pretend that he didn’t know who she was?

Yet, if this man really didn’t know her identity, and had no idea from where she’d come, maybe she had sailed far from the king’s clutches, to another land.

Regardless, she had to play things very carefully. It didn’t matter where she was. The king’s reach was vast. This man could be in the king’s employ whoever he was, and wherever he lived. The islands that were now under Zomotian rule would never dare go against their new ruler, the king.

She had to think. Had to remain vigilant.

The man surveyed her closely, suspicion heavy in his hypnotic gaze. “When your health is recovered, I will arrange for you to be sent back home.”

Grasping for courage she didn’t feel, she angled her chin into the air. “S…sent back?” Everything inside her went to ice.

I was captured from the beginning, when Lahna is adrift, then rescued by Caelan. Both have strong reasons to distrust, but their attraction for each other is impossible to resist. I love this richly described island world, it’s strong characters, and the story. In fact, I want more... Of the world, of the secondary characters, of everything. This story is emotional, sensual, and one of my personal favorites.