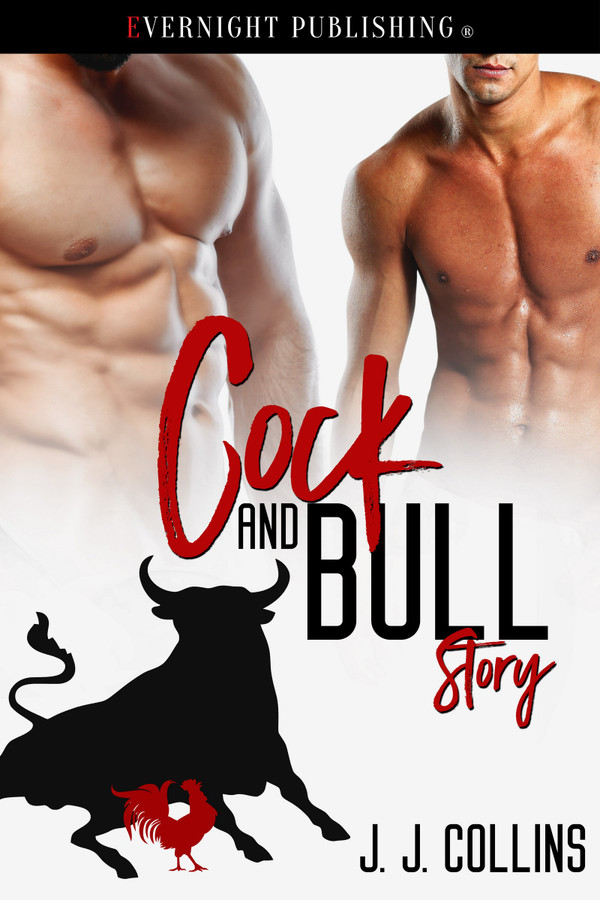 Tauro is a bull shifter. Forced to leave the pro wrestling ring, he works off his aggressions as a street fighter. Gallano is a cockerel shifter from a family of famous luchadores. When the irresistible cock meets the immovable bull, sparks are bound to fly … but only if they can fight their way past their own mutual stubbornness.

He had nearly dozed off when he realized the raking claws had at some point turned into fingers. He peered one-eyed over his shoulder. Gallano’s human face grinned back at him. “Ah, there you are. Care to join me? There’s a lot less of you to pamper in your human form.” He danced his fingers down Tauro’s spine. “Though not by much.”

Tauro hesitated. In bull form, he had a definite size and weight advantage over a human Gallano. He could drive the man off his farm and settle the matter for good. But those hands were hard to argue with. Against his better judgment, he nevertheless morphed himself back into his human self.

Immediately Gallano moved his hands upward, to knead his neck and shoulders. The smaller man cooed at him, pleased. “Yes. So very much better.”

Of course they both were naked now. Tauro stole a glance at him, and was surprised to discover the cockerel bore a mighty fine spear—bigger than he’d expected, with a cap like an arrowhead and mouth-tempting thickness. Perhaps he wouldn’t need to look for a stallion after all.

No. He dare not encourage the pushy little bird. What was he thinking?

He was thinking it had been a long time since a man had stirred his desires. His own great bullish beast began to inflate beneath him, as if it sensed the opportunity.

Unexpectedly, Gallano moved and rolled Tauro onto his back. Taken by surprise, he had no chance to resist. Gallano crowed in excitement. “Ah! There’s the beauty I spoke of last night. So huge! Are all bulls hung so magnificently? I’ve been missing out.” He reached for Tauro’s dick.

Tauro slapped his hand away. “Behave yourself. Are all you chickens so grabby?”

“He who hesitates loses the worm. Or something like that.” He folded his arms on Tauro’s belly, rested his chin on them and stared wistfully at Tauro’s rigid member. “That’s no worm. That’s an anaconda. I know bears who would weep and gnash their teeth to own a dick like that.” He sighed. “And you won’t let me touch it. Such a loss. I suppose I must kill myself now.” He wiped an imaginary tear from his eye with a finger.

“Don’t be so melodramatic. It’s only a bit of flesh.”

“Still only flesh.” Tauro fought to keep a devil’s grin off his face. “Nine thick inches of sweet, randy meat that would split you like a chicken breast. You couldn’t even swallow the head without choking. Perhaps you’d rather try one of the goats. They’re closer to you in size.” And get chased from the field by Billzebub. That would be something to see.

Gallano made a disgusted face at him. “Hump animals? Are you mad? What do you take me for? It won’t split my hand if I touch it.”

“You couldn’t wrap your fingers around it.”

“That sounds like an invitation.” He reached again for Tauro’s cock, this time with his eyes on Tauro’s, waiting for a no or go ahead.

Tauro found the urge to stop him waning. He had to admit he was curious—what the man’s hand would feel like, whether he actually could get his fingers around it. What Gallano’s tongue and lips could do to his eager beef stick. How it would feel to have Gallano’s surprisingly hefty cock spearing his mouth, or his ass. Would he taste like chicken?

His Super Neighbor by J.J. Collins