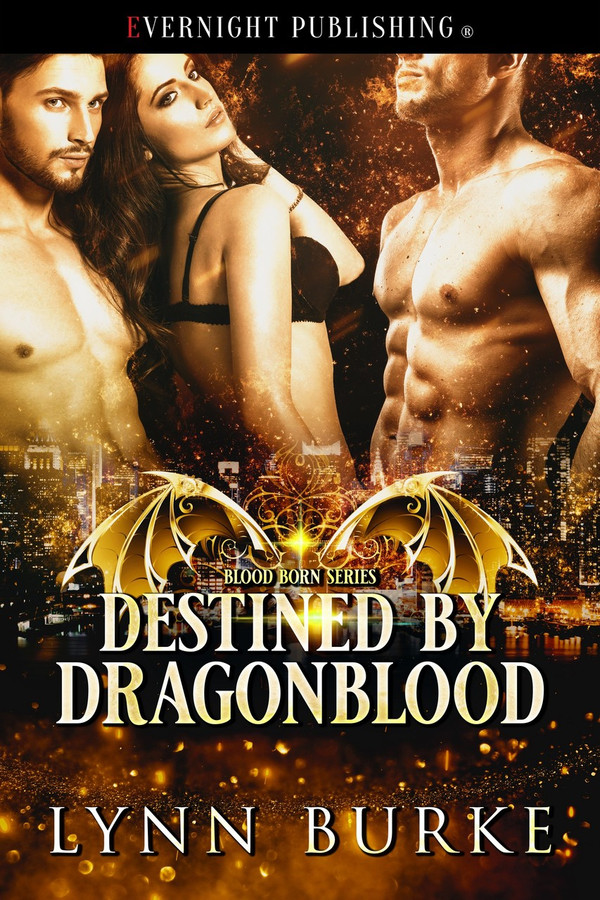 Dolyn Kemmerly has found his destined mates. Unfortunately, they are more human than dragonblood. While his inner beast longs for them, his male stubbornness insists there have to be mates more worthy of his royal bloodline.

Due to Ashley O’Connor’s traumatic past, only the painful slap of a Dom’s toys can help her find release. A celibate sub, she’s never ached for a man’s tender touch—until a mysterious stranger follows her into her Master's club.

When Ashley suddenly lifts one of her hard limits, Giovanni DiLoreto, her sex-therapist recommended Dom, is finally allowed to touch the flesh he’s been lusting to caress. Doing so, however, earns him a bloody nose by a hot-as-fuck stranger. Master Vanni has never touched a dick in pleasure, but the sudden desire to dominate the newcomer—while Ashley watches—consumes him.

Dolyn’s ancestors might accept Vanni for the heart of the dragon inside him, but it will take Dolyn’s complete submission to Vanni as his alpha to help Ashley heal and unlock the destiny awaiting them all.

Cloaking myself and following Ashley into the nondescript door at the end of the hallway came easy. Slipping through what appeared to a main entrance rather than a locker room of sorts she had entered proved a bit more difficult as a receptionist’s desk and bouncer flanked the double doors.

I glanced around the reception area, fully present, yet visually, nothing more than a bend of light to the two in the room with me. Gray walls. Glass desk. Abstract art on the walls and two other doors besides the one Ashley had disappeared through—boring and not giving me a hint of what lay beyond.

I eyed one of the chairs along the wall to my left and considered waiting until Ashley returned.

The double doors opened, however, releasing a flood of sensual delights mere humans wouldn’t catch. Heat, aroused murmuring, and sex. My dragon hummed his delight, but I frowned and raced forward, slipping through the opened door as the patron of whatever the place was bade the receptionist a good evening.

A holding room with another set of double doors that couldn’t muffle or contain the patrons’ arousal. Still nothing more than a flicker in a person’s peripheral vision, I pushed one of the doors open enough to slip through.

I stepped over a threshold leading to a sinner’s delight. Musk, sweetness, and the scent of anxious perspiration swept over me. Humans … dozens of them in all sorts of dress and lack thereof mingled in the huge lounge area. Dim lights. Low music. Leather seating and a bar lay on my left, a dais beyond held a St. Andrew’s Cross with a woman moaning beneath a Dom’s ministrations.

Chains clanked from a man strung to the ceiling directly on my right. Groans rose from two men getting their cocks sucked by kneeling submissives as they lounged by the bar on my left.

My gaze returned to the cross and the woman strapped to it.

My dick swelled in my jeans, but it wasn’t the actions of the Dom that turned me on. It was the thought of being on the receiving end of his flogger—the one receiving the type of pleasure found in pain.

My dragon’s whimper to play hit me hard, the fact I wanted to be the one submitting rather than dominating even harder. “Alpha,” I muttered aloud, reminding us both of our dominance as a blood born dragon from the royal line.

I’d caught a hint of Ashley’s scent while following her down the hallway into the sex club, but the overwhelming perfumes of human and sex masked her—if she’d even made her way into the lounge area.

My female … found delight in a sex club. I couldn’t have asked for more. Couldn’t have been more pleased—so why didn’t my inner dragon hiss his desire to tie her up? Stripe her ass in the way Elijah had mine countless times? Why did I want to pleasure her with gentleness—loving tenderness?

A fierce frown dented my brow as I licked my lips, hoping for a taste of Ashley’s sweetness in the air.

Her scent slammed into me with a wave, and my dragon growled a rumble deep in my chest to taste. To claim.

Pale, shapely legs led to her rounded ass the man now caressed, and my need to taste leaped to fierce protectiveness in a single heartbeat.

No longer cloaked, I strode across the room, darkness seizing my mind, my self-control, something that hadn’t happened in over a hundred years.

He’s touching her. Mine.

My dragon hellbent on ripping the man’s arms from his torso, I stalked forward, eating up the distance between us in a matter of seconds, my claws shimmering in and out of sight.

The width of his shoulders came close to mine, but the breadth of his chest didn’t compare. An easy to defeat opponent, my dragon shrieked, clawing at my brain as I pulled all attempts to shift deep inside me where he couldn’t explode into a mass of muscle, sinew, and scales.

I grabbed the man’s shoulder and spun him toward me, my other fist shooting out, connecting with his nose before he had a chance to blink.

My dragon shrieked again as he grabbed hold of my upper arms to keep from falling. Electrical charges raced up through my chest, catching my breath as we stared into each other’s eyes.

Dick immediately swollen—leaking at his touch—I hesitated a mere blink, my desire to drop to my knees and worship him shattering all I had hoped for my future.

His punch landed on my side with enough pain my stubbornness rose with a flap of dragon wings, and growling with the need to kill, the need to fuck, goddamn need—I clocked him on the side of the side of the head. He held tight to me, yanking me down as he fell like a bag of bricks, stunned but not knocked out.

I landed on top of him with a groan, my aching dick pressed against his, a wave of desire slamming into me. “Fuck. Me,” I gasped the words, blinking once more.

A cocky grin wobbled his lips, and he shifted his hips beneath me, pressing his own hard-on against mine. “I’m usually the one in charge, but that’s one command I would love to obey.”

His low voice slithered over my skin, waking goosebumps in its path, like a physical caress, and I froze.

My mate, my beta … a goddamn, fucking Dom.

If it mentions Dragons, then I’m hooked! This one has dragons AND a menage! Sounds good to me! Written from three different perspectives, we quickly get into the story. Dolyn is our dragon, and has a superiority complex. After all, he IS one of only two full-blooded dragons left. Ashley is our main female, scarred and scared from her past. And Vanni is other point of the triangle. A Dom in his own right, and definitely not prepared to ‘submit’ to anyone. By the way, he has a bigger superiority complex than Dolyn! This story is hot! from the word go, but there are difficulties for our tremendous trio. I found two of them (either A &amp; V, or A &amp; D) had a connection, but not V &amp; D. This meant that I found parts of it… lacking, for want of a better word. I can understand Dolyn’s complex, but Vanni’s? I don’t know. It just didn’t meld for me quite as much as other readers. Yes, you get your HEA because Dolyn has an epiphany, but it just didn’t quite do it for me. Although very well written, there were some errors that I picked up on as I read, although they were only small. The world-building was good, the characters were (mostly) great, and I would definitely delve into their world again. If you’re after a hot, steamy read, then I can absolutely recommend this.

Dolyn knows who one of his mates is. But can be keep it together for his other mate?I Ashley one of Dolyns mates. has overcome a horrible last Master Vanni Ashley Dom and an Alpha. What happens when they all meet?

Oh My Word, This Book has absolutely taken me over. I devoured the book in one hour, it&#039;s so good. Lynn Burke have become one of my favorite authors, she has the ability to get you hooked on her stories and I love her for that, this is the second book in the series and it&#039;s getting better and hotter, this SERIES IS A MUST READ, it has everything, emotions, angst, heat. Now if they could change the ratings from 5 to 20 stars that would be AWESOME because this series definitely deserves that

Drawn by Dragonblood by Lynn Burke