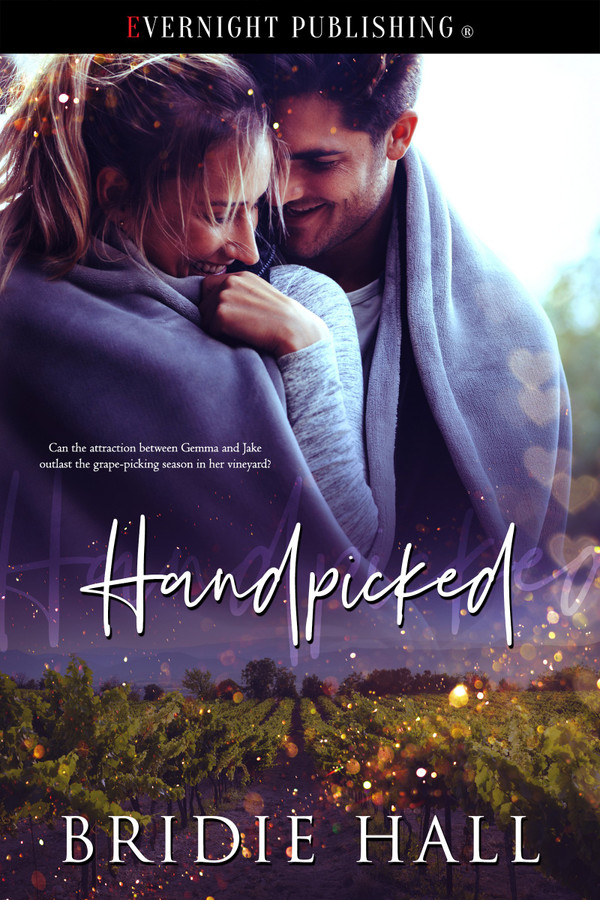 Can the attraction between Gemma and Jake outlast the grape-picking season in her vineyard?

Gemma has managed the family wine-making business ever since her husband died and left her alone with their daughter. But this fall, there’s something in the air that makes her moody and restless. It doesn’t help that the usual team of seasonal workers left her in the lurch.

Jake's life revolves around his sports career. When an injury forces him to rest, he becomes a mentor to a troubled teen, Tommy. Trying to reform him, he takes him on a working vacation to an old vineyard.

As Jake helps Gemma get the work done, they struggle to ignore the attraction they feel for each other. There is no point giving in when Jake will have to leave for France at the end of his vacation and Gemma can’t leave her vineyard.

He bent down and picked up her feet, still in her work boots. He propped them up on his knees and started unlacing the boots.

“What are you doing?” she asked, appalled, and placed her glass on the table.

“I’ll massage your feet. They must be killing you.”

She made a horrified sound. “They’re dirty. And smelly.” She swatted his hands away, but he didn’t relent.

“You’ve never smelled my socks after a game. You don’t know what smelly is.”

One boot thudded to the ground and the other one followed shortly after.

“Jake,” she tried again, but he had already pulled off her socks. She hid her face in her hands.

The first contact of his warm fingers on her sore feet had her rolling her eyes to the back of her head. A moan tore from her throat. Torn between mortification and pleasure, she didn’t open her eyes when she heard Jake chuckle.

Her mind wandered to other things he might be good at. Heat swamped her body. She wriggled on the sofa, tension wiring her body with a need she hadn’t felt in ages.

His fingers massaged and kneaded her feet and toes. She bit her lip to stop herself from making any more suggestive sounds. She laughed when he hit a ticklish spot.

“Oh, did I discover a chink in your armor?” Jake asked.

“You’re deluded. My armor is intact.” Gemma giggled when he tickled her again. “Stop! Please, stop!”

She laughed so hard she couldn’t breathe, but he wouldn’t stop tickling her.

“Admit it!” he demanded, a wicked grin splitting his face.

She shook her head, stubborn yet gasping for air, tears of laughter in her eyes. But then she couldn’t take it anymore. “Okay, okay. I admit.”

Her whole body hurt from the strain of trying to get her feet away from his wicked fingers, but the tiredness was heavy and pleasant. “You’re evil,” she complained, wiping her eyes, a silly grin on her lips. She couldn’t remember when she had last laughed like that. It was quite a change from the morose mood earlier. Everything in her felt alive and buzzing with a pleasant sort of tension.

“You don’t know the half of it. Now that I know there’s a crack in your defense, I’ll find others, bigger, wider ones.”

“Please don’t.” She said it as a joke, but the significance of her words struck her a second later.

Jake looked at her as if he too had heard more in her words than she’d planned to say. He pulled her feet back in his lap, so her legs were stretched out, and he rested his large hands on top, warming her skin. He gazed out over the grassy stretch of sloping land which separated the house from the sea. The ripples on the water looked gray and lazy in the late evening. The breeze off the sea tasted briny in Gemma’s mouth.

“Did it ever occur to you,” he said, pausing shortly before he continued, “that you don’t need it? Your armor?” He looked at her then. It was too dark for her to be able to decipher the look in his eyes. She tried to figure out what to say without sounding pathetic, when he added, “You don’t have to answer that. Just think about it.”

Gently, he lifted her feet and got up from the sofa. He placed her legs back down onto the cushion, holding them for a moment. When his hands let go, she felt a chill in the spot where he’d touched her skin.

A Distant Voice by Bridie Blake