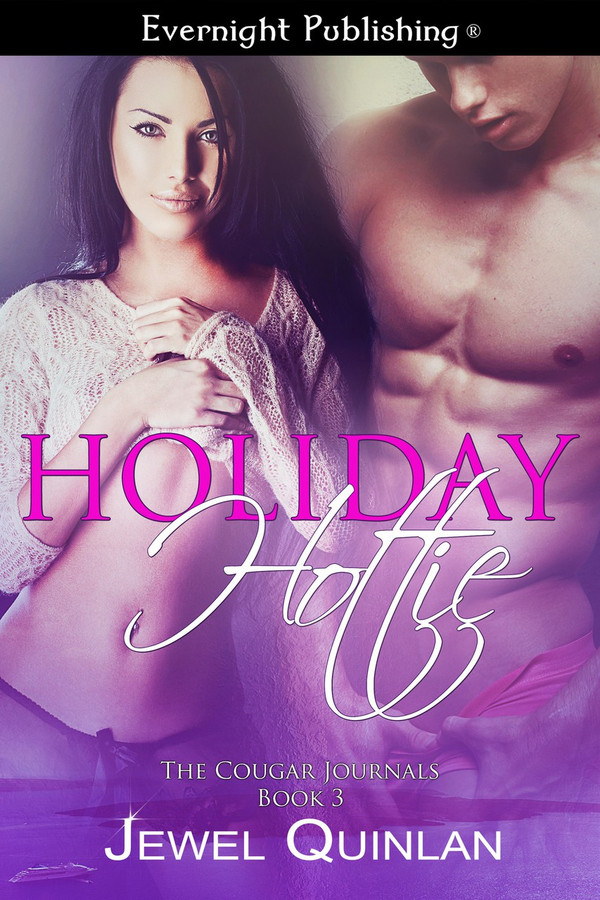 To get away from the pressures of work, Ava takes a last-minute cruise to the Greek islands by herself. But on the ship she runs into the coworker she despises the most, John Montgomery. Somehow he has a knack for driving her mad, and seeing him with his hot young date makes Ava feel even worse about herself.

Meanwhile, sexy young steward Florian has been making passes at her, reminding her of how beautiful and alive she really is. Will Ava allow her loneliness to be chased away and desires fulfilled by a much younger man one more time?

“Something to drink, Miss?”
I looked up to see Florian smiling down at me. “Oh my gosh, what are you doing here? I thought you had the day off again.”
He was wearing black shorts and a black t-shirt with the ship’s logo on it. The dark fabric made his own natural coloring stand out even more. He sat down on the edge of my lounger near my hip, seeming pleased I’d noticed his absence.
“Normally I would have the day off, but a friend of mine is sick and I’m covering his shift.” His eyes swept over my body as he spoke, and the glint of appreciation I saw in them made me feel good.
“Thanks again for your company yesterday,” I said in a low voice.
He smiled. “My pleasure.”
The tone of our simple words exchanged even more meaning between us. Having been single for so long I’d become a master of deciphering tone, and his was telling me he’d had the time of his life. He was so damn cute.
“So what can I get you? You look thirsty, and I wouldn’t be doing my job if I left you that way.” He was leaning toward me, his small round tray forgotten on the deck beside him.
I put an arm underneath my head and removed my sunglasses so I could make better eye contact. “What would you recommend?” My suggestive tone made his eyebrows rise and his cheeks dimple in pleasure.
Even though he was young and a member of the staff, I allowed myself to respond to his attentions. The pang of loneliness I felt at seeing John and Kim together reared its ugly head. What was wrong with getting a little attention? Why not have some fun on this trip? People flirted with each other all the time. And it was my turn to throw off my conservative chains and flex my sexy muscle.
He frowned as though deep in thought, considering the question. Then he exhaled and pointed at me. “You look like the kind of woman who enjoys not only fine wine but great gin as well. Our bartender makes a cocktail I think you would like. Not too sweet and just the right amount of tartness to it.” He said it the way car aficionados described legendary Porsches. I knew right away he was talking about himself.
He had it right on the nose. That was exactly my style. “I’ll give it a try.” My hand was on the chair next to his leg, and I fingered the bare, firm flesh of his thigh. I blamed my earlier glass of champagne for my loosened inhibitions. I sat forward and leaned in close to him. “Maybe the next time you’re off, we can hang out again.”
His eyes widened with pleasure. He opened his mouth to say something, but someone else cut in.
“Sorry to interrupt, but I wanted to see if I could order a couple of drinks.”
I turned my head to see John Montgomery standing behind my chair. From the amused look on his face, he’d heard everything I said. Mortification laced through me.
Florian jumped up. “Of course.”
John gave him his order, and Florian went to the bar. Then it was just John and me.
“Having fun, Ava?” He lifted a brow.
His eyes were hidden under the dark sunglasses he wore, but I got the meaning, the bastard. He was trying to embarrass me for flirting with Florian. I huffed at him and opened my magazine again, refusing to take the bait.
He tried again. “He’s a little young for you, isn’t he?”
“Hm. I think he’s the same age as Kim actually. If you don’t think that’s too young then I certainly don’t.” I allowed the sweet sound of disdain to roll off my lips, then I flipped over onto my stomach, excusing him.
He gave a soft chuckle. But he got the hint because he walked away.

I love Ava and her escapades however this one was a little more tamer. I wasn&#039;t a big fan of Florian. However I loved the tension between John and Eva. These two would be great together.