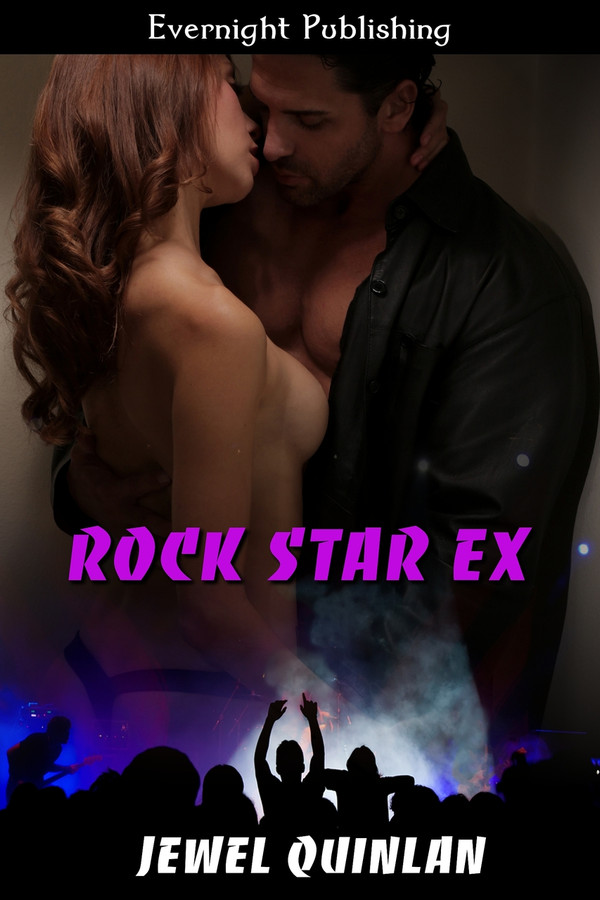 Social media consultant, Eve Everett, is less than thrilled when her business partner hooks them up with a job covering celebrity rock band Arsenal.  Their new lead singer, Devon Quinn, is the man who broke her heart five years ago.  But there’s no way Eve can turn down the assignment. It’s the big break their fledgling company needs.

To boost Arsenal’s social media presence the band’s manager wants intimate coverage, especially of Devon, which means traveling with the band in their tour bus while they promote their new album.  It’s not long before Devon tries to rehash the past but Eve would rather leave it buried where it is.

When Eve is asked to be part of a music video, she decides it’s a great opportunity to reap some revenge by showing Devon what he’s missing. But soon she’s the one losing control. Will Devon once again claim her heart as well as her body?

The hairs on the back of Eve’s neck stood up and that’s when she knew his eyes were on her.  She’d already spotted him.  He’d steered a whole gaggle of girls to the bar, his arm around one of them, and it had made her stomach churn.  Keeping up her conversation with the band suddenly became difficult.  It was hard to concentrate on talking when her mind was absorbed with the awareness of him.  As soon as she saw him put his hand on the blonde girl and lean down to sign the satin bra, disgust had welled up.  She’d shifted her spot in the group as soon as possible so her back was to it all.

She had tried to join in on Kate’s discussion with band manager Clayton Drake, but it was hard to hear them in this crush.  Anyway, the band members were trying to get her attention.  The lead guitarist, Tommy Adler, seemed pretty nice actually.  He had laugh lines around his eyes that she found charming.

“It was amazing,” Eve said. “I’m so glad to see Arsenal performing again.”

He grinned. “Me too.  Thanks to our new vocalist, we have a lot more in store.  Tonight was just a sort of…appetizer.”  The other guys agreed.

“Smile, Eve,” Kate called.  She had her phone out and was aiming it at her so Eve slid her right arm around Tommy and the other guys crowded in.  The flash went off, blinding them all.  “Great, but, hold it. We need to get one more in,” Kate said and flapped her hand at someone off to the side, waving them into the photo.

Eve held her pose and felt an arm curve around her waist from the left side.  The flash went off one more time, causing spots to appear in her vision.

“Awesome!  Thanks, everyone,” Kate said.  She turned back to the manager.  “This is going to be great for our social media feeds.  Pictures with the new lead singer…”

Eve closed her eyes for a moment, reaching a hand up to rub her temple, waiting for her vision to return.  Since when did iPhones have such a strong flash?  It was probably just because it was late and she was tired.   Tommy had let go but the other arm on the left side was still supporting her.

“Oh, man.  Either I’m seeing spots from that flash, or you all need to get to a doctor immediately,” Tommy said.

“That’s what happens when you do so many drugs, Tommy,” Drew Haley teased.

“Drugs?” chimed in Shane Nelson. “You had drugs and you didn’t share with me?  That’s just not right.”

They all laughed.  Eve dropped her hand from her temple and opened her eyes.  The spots were gone and she could see clearly again.  But she wished she couldn’t.  Standing right next to her, one arm wrapped around her waist, was Devon.

Devon let go of her waist and held out his hand.  His expression was inscrutable.

She hesitated, and held hers out as well.  If she’d had any question whether he knew who she was, the handshake answered it.  His fingers wrapped firmly around hers, holding her hand for longer than was necessary, his eyes searching deeply into hers.

What they searched for she couldn’t fathom, or why.  He’d abandoned her long ago, taking her heart with him, like some sad little groupie.  Well, he wasn’t about to get even a smidgen more.  She pulled her hand back.

“Nice to meet you,” he said softly.

Oh, so they were going to play that game?  She could play it too.  “Likewise,” she returned coolly.  Turning back to Tommy, she put on her best flirtatious smile.  “Weren’t you going to show me the band dressing room?”

Tommy’s brown eyes lit up, but before he could say a word Devon’s hand clamped around her waist again.  “I’ll show her,” he said in a cool voice.  His eyes were drilling into Tommy’s, and some unspoken agreement seemed to pass between them, because Tommy nodded his head casually and turned back to the others.

Anger flared up inside her.  How dare he!  But she wasn’t about to make a scene in front of everyone.  It was fine.  If he wanted to be alone with her then she would give him the piece of her mind that he deserved.  She’d been storing it for five years and if he wanted to unlock it, then so be it.

One of my all-time favorite lines from a book. “His voice was a combination of sex and sandpaper.” What a great opening line. That alone hooked me. While the story is written around a rock band, it wasn’t predictable. I liked that the author kept it fresh, with a good flow, and she also did a great job with her characters. For a book of only eighty some pages, the characters were interesting and well developed, with a great chemistry and history between Eve and Devon that I did enjoy. If you don’t feel like you have the time to pick up a lengthy novel, but are looking for something with some sizzle and substance that you can read in a couple of hours, I would recommend reading Rock Star Ex.

Quinlan has found a way to captivate from the beginning. I loved reading this book and couldn&#039;t put it down. Her characters were strong and witty. I highly recommend this book.