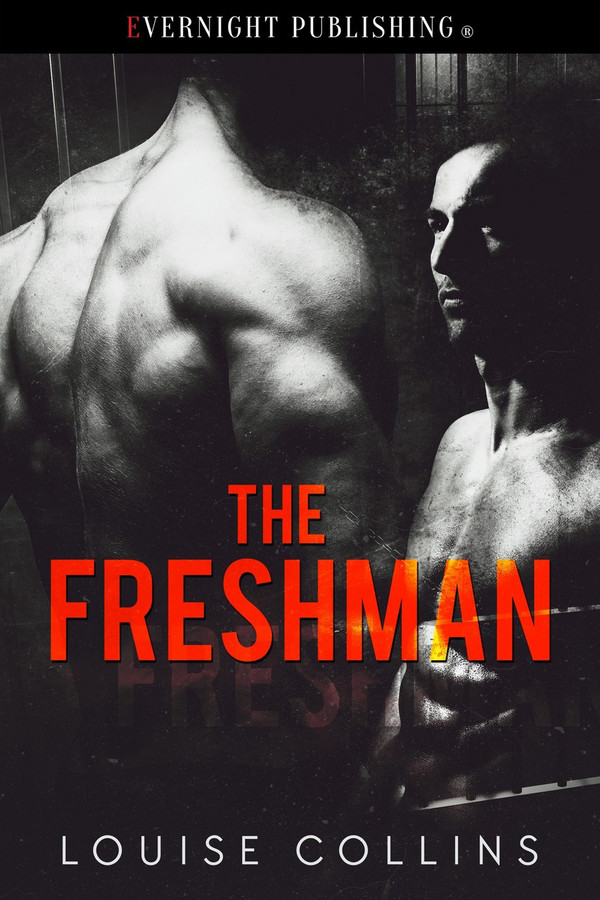 Nate Mathews is a murderer. Alfie doesn’t know the details of his crime, and he doesn’t want to. All he knows is Nate Mathews is evil, and his colleagues at Larkwood prison shudder at his name.

But Alfie has caught Nate’s eyes, and they start flirting in the early hours. It’s forbidden, terrifying, but arousing too. One whisper of ‘Freshman’ from Nate, and Alfie’s stomach flutters, and his pulse increases. Alfie knows if he reads Nate’s file his attraction to the criminal will turn to disgust, but he can’t bring himself to do it. He likes Nate. Nate makes him feel wanted, and that’s a first for Alfie.

When Nate escapes and Alfie is left behind as the fall guy, Alfie questions all that happened between them. Did Nate ever really care for him? Or was he just setting Alfie up for his escape?

“We don’t want the power cutting out before he’s in his cell,” Henry muttered, “Where the hell are they...”

A gate clunked, followed by another, and they both turned their attention to the biggest, most secure gate that led into the lobby. Nate came into view. He stared through the window of the office and pinned Alfie in his chair. He couldn’t even continue his obsessive nail nipping. The corner of Nate’s mouth lifted in a smile, and he narrowed his eyes slightly. It was the third time he had seen Nate in the flesh, and the sight of him robbed the air from Alfie’s chest and the moisture from his mouth.

Two prison offices walked in Nate’s wake, and when they caught sight of Henry their faces sagged with relief.

“You two can handle him.”

Henry bobbed his head. “Had a feeling you’d say that.” He walked out the office first and exchanged small talk with the two guards.

Nate stayed by the door, eyes unblinking and smile growing. He wore another tight t-shirt, and his arms were secured at his back.

Alfie swallowed awkwardly and got to his feet. He moved with forced confidence toward Nate, but the bigger man smirked at Alfie’s attempt.

Alfie squeezed past him, took two steps to the gate to H-wing, and then the building shook with the rumble of thunder. The vibrations were felt deep in his chest, and all of the officers looked up to the blinking light. Alfie felt Nate’s eyes still on him.

“Not scared of a little thunder are we,” Nate mumbled.

Alfie turned back to the gate, shoved his key inside, then all went dark. He pulled the key out without unlocking the gate and shoved it into his pocket.

Alfie blinked in the darkness of the lobby but couldn’t make out the shapes. The shock of the situation had all of them falling silent, and it was Henry that finally broke it.

Alfie stuck his hand out, and he slapped a muscular chest. Nate didn’t make any noise, and he didn’t move beneath Alfie’s hand. He allowed Alfie to wipe his hand across his chest and grip his bicep.

“The backup generator will be on any minute,” one of the guards said. “Don’t do anything stupid, Nate. Just stay there.”

There was a quiver in the guard’s voice that unsettled Alfie. They were afraid, whether for him or themselves, he didn’t know. He had hold of Nate’s arm, and the muscle flexed beneath his fingers, hard, solid muscle that pulsed his fingers as hard as he pulsed the muscle back.

Nate’s shoe bumped into his, and Alfie shivered at the heat radiating from the wall of flesh in front. Nate was closer than seconds ago, leaning into Alfie’s personal space. He could smell him, a dark smoky scent, manly and forbidden, but he dangled close, tempting Alfie to take a breath of him deep into his lungs, and he couldn’t ignore it.

His eyes slid shut and he breathed deep, sucking the warm scent inside him. It soothed his weary limbs, and he found himself melting into the gate behind him.

Nate moved with him, pushing his chest flush to Alfie’s. He wasn’t crushing, but Alfie could barely breathe, stuck between Nate and the metal bars digging into his back.

He nodded, and his face brushed bristles. Nate’s face was next to his, Nate’s chest was touching his, and his manly scent was taking over the smell of his damp hair and stale trousers. Alfie’s lips popped open, and he panted for the thinning air.

The feeling of bristles on his face vanished, and he jerked at the first touch to his neck. Not fingers, it couldn’t be fingers. There was soft center to the facial hair, and Alfie realized Nate’s mouth brushed him. Not a kiss, just a touch, a touch that ignited pleasant tingles down to his toes.

He leaned back and surrendered himself. Nate’s open mouth skimmed along his face, ghosting his open mouth.

Nate paused. Lips touched lips but with no pressure, and Alfie breathed through his mouth, taking the air from Nate and claiming it as his own.

He could only breathe through Nate, draw what he had into himself to keep upright and conscious. Alfie’s head spun, made worse by the darkness and his drumming heart.

Nate’s lips moved away, and he tried to follow until they pressed into the shell of his ear.

“Freshman,” Nate whispered, so softly Alfie was sure he had imagined the words, assumed Nate said them like all the other times.

Nate’s lips hovered by his jugular, and Alfie thought about the blood rushing through him. The blood he could hear in his ears along with his exaggerated breathing. Nate could sink his teeth in, rip through his flesh and kill him after his easy seduction. Even though the thought registered, Alfie didn’t straighten or shuffle along the gate. He shivered at the nip to his neck, and the one to his jaw.

Instead of moving away from Nate’s teeth, he found himself angling his head and neck for Nate to nip more. Never hard enough to puncture skin, not enough to hurt, just a gentle pressure of teeth, and each bite increased Alfie’s heart rate, drove him closer to hyperventilating. His skin tingled, and each touch from Nate sent a spark of sensitivity coursing under his skin. The blood in his body felt hotter, and it pooled in his groin.

“The generator is starting up.”

Nate took an audible step back, stomping his feet more than necessary, as if letting Alfie know for sure he had backed off.

Alfie straightened, rubbed a palm down his face, and stared into the darkness. The lights buzzed noisily, then lit the space with their dulled glow.

I love reading about twisted, dark love stories with morally questionable, grey characters and this book ticks all the boxes. Nate is a fucked-up motherfucker but he&#039;s hot and mysterious, and just like Alfie, I fell for him bit by bit until it inevitably smacked me in the face. Alfie and Nate&#039;s chemistry and sexual tension are off the charts. There aren&#039;t many explicit sex scenes, but the push and pull between them are just delicious. Louise Collins created an atmosphere that just left me breathless in anticipation - one scene in the dark in particular... Trust me, you wouldn&#039;t mind the lack of actual smut AT ALL. These two are just so sexy together, whether they are in the same room or not. ;) Overall, this book is fantastic. I finished it in one sitting instead of sleeping. For sure I&#039;m gonna check out Louise&#039;s other works. The only reason I don&#039;t rate it five stars is because the ending feels a tad rushed and it could use an epilogue of some sorts. But it doesn&#039;t make it less enjoyable.

Every bit as good as everyone is saying and definitely well worth the read! Louise Collins draws out the story so perfectly and the only thing I wish she&#039;d done differently was to add maybe 20 more pages at the end... Not wanting to give anything away here I&#039;m not going to say more - but damn, YES read this book!

This is a gem ! The anticipation, the circumstances, the erotic feel of this tale is stunning ! In the UK, Alfie, 18, is new as a prison guard. He takes more crap from his fellow guards than the prisoners. It&#039;s tough being the new guy. His boss is cantankerous and his fellow guards are slackers. Triple murderer, Nate, who&#039;s been there 10 years, has taken a liking to Alfie. He calls Alfie &quot;Freshman&quot; but in a nice way, and they are drawn to each other, but Alfie can&#039;t let his guard down. This is unlike any prisoner book I&#039;ve read. It is a convicted killer and a guard, so, they are not the usual jail type scenarios. This is different, with a tenseness and sharpness that fills each scene. It is a story that is fresh, exciting and &quot;un-put-down-able.&quot; Magnificent characters all the way through, and our author makes us feel like we are there watching and waiting. The sex is truly vibrant. We have a wonderfully written book, with a first time with this author for me, and I&#039;m impressed. The ending is a total surprise. I loved this story. Highly recommended. ENJOY ! ==== Thanks to Martin and Truus for their reviews that made me take a chance on a new author !

A captivating, dark, and thrilling story that will keep you on the edge of your seat from beginning to end. When Alfie hears and sees Nate for the first time he&#039;s instantly hooked. Their dynamic is incredible and they begin a dangerous game. It&#039;s an angst filled read that will keep you captivated. I voluntarily reviewed an advanced reader copy of this book.

Really enjoyed reading this one, so just wanted to drop a quick review and encourage others. It&#039;s definitely got some dark and broody feels going on. The coolest thing about this book though is that as much as the two main characters are getting to know each other, it&#039;s almost all happening on opposite sides of a metal door in little quick snippets of dialogue. There&#039;s so much character breathed into the quick back and forth, and I love that Alfie always has a quick rejoinder for Nate.

5 BIG stars Oww whoahh!! I loved this one. Read it in one breathe, because couldn’t put it down. Forbidden so forbidden but my goodness... it was more than awesome. Alfie always has the night shifts in the Larkwood prison. As being the youngest the nicknames are flying around his head. When he hears a voice whisper ‘Freshman’ and sees Nate for the first time he is speechless. But Nate is a dangerous killer. Together the play a dangerous game. The building up and anticipation was just killing. The tension throughout the whole story was more than excellent. The dark atmosphere enchanting and addictive. The prison at night makes you shiver. But Alfie and Nate’s dynamic tops it all. I was constantly holding my breath... that was one hell of a read. The way of writing was more than captivating... i was under it spell. It made me lightheaded. This all take place in a quite small environment and that makes is even more attractive. This should definitely be made into a movie!! Kindly received an arc from the author