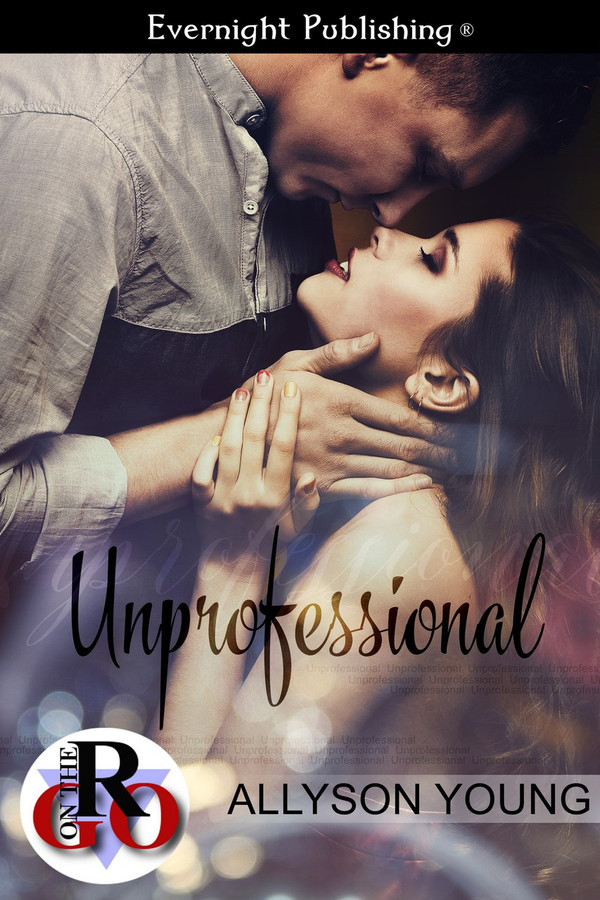 Hannah Evans is personal assistant to the very professional Benjamin Willis, and he keeps her firmly in that role. Her boss is a great man, and if he rewards himself with a large number of blondes, well, even great men can be misguided. Hannah couldn’t ask for anything more in her job—except she’s fallen for her boss. And now Mr. Willis seems to be seeking more than mere pleasure. What if he finds a woman with beauty and brains?

Unable to bear the idea, Hannah submits her resignation. Faced with losing her, Benjamin’s entire being reacts in shock, dismay and outrage, causing him to examine how he actually views Hannah. She has had months to come to terms with her strong emotions while he has had mere hours. But Benjamin is a quick study and discovers his true feelings for the woman who has been right under his nose.

“Hannah.” Her name fell harshly from his lips and she blinked several times, appearing to get herself under control. “Tell me why you’re leaving.” Leaving me.

“I appreciate the opportunity,” she nearly whispered. “Seeing as I had no experience.”

“You said that in the letter,” he agreed. “And I was happy to give it to you. You proved yourself quickly.” He shifted a tad closer and studied the rising color in her cheeks.

“I … I can’t stay on. Big world of opportunity out there and all.”

Had this position been a stepping-stone? The idea soured his gut, though it shouldn’t have. He’d thought differently of her. When she couldn’t hold his gaze, he pushed harder. “You’re not telling me the truth. How bad can it be?”

Giving into an instinctive urge, he grasped her other hand and hauled her close. He locked his gaze with hers when she looked up, startled. “Tell me,” he insisted.

“I can’t.” She nearly whimpered and a good man would have backed off and let her go. He couldn’t find it within himself to do it. Maybe he was indeed possessed of a cavalier attitude.

Recognizing he couldn’t force her to confide, he resorted to sneakier tactics. He turned on the charm and cajoled. “Hannah, you’re invaluable to me and I can’t get my head around finding someone to replace you. Is it something I’ve done? Is the salary an issue?”

A shake of her head sent more strands of hair drifting down to her shoulders, these longer than the others, and they rested against the upper swells of her breasts. His stare traced their path before he glanced up to see her eyes wide with surprise. God, she was lovely. Smart, skilled and talented, all woman. Different from—

“Benjamin?” His name wasn’t on Hannah’s lips but spoken at his office door. He recognized that voice. “Benjamin?”

He could only imagine how it looked, his disheveled PA sprawled in a chair, him kneeling at her feet, holding her hands captive and their faces mere inches apart. With an effort, he turned his head and acknowledged his latest fling. Past fling. “Give me a minute, Tiffany.”

Hannah quivered and tried to pull away, but he hung on tightly, willing the tall blonde out of his office.

“I see you’ve already replaced me,” she replied, scorn and anger coloring her voice. At any other time, he might have found her alluring, all flushed with outrage and passion. As usual, Tiffany was dressed to the nines in a body-revealing outfit that displayed her long, slender figure and enhanced breasts to full advantage. But she left him cold, something new, because he rarely tired of his blondes physically, choosing to keep his hookups brief to avoid emotional attachment. A shimmer of gold flitted through the air and dropped to the carpet nearby where he knelt. Diamonds winked up at him.

“Keep your token, Benjamin.” Tiffany then sneered at Hannah. “She’s hardly your taste. Pudgy and plain, wouldn’t you say?”

If he hadn’t known to keep hold of Hannah, wrapping his hands around Tiffany’s elegant neck might have been an excellent alternative. “Get out.”

“Gladly. You’re welcome to him, secretary-type. It won’t last, especially as he’s slumming.”

He spared her only enough of a look to ensure she had indeed gone before turning back to Hannah. Who was staring at him with a multitude of emotions washing over her expressive features.

“She’s different than the others.” Well, that was the last thing he expected.

“Excuse me?” He knew he sounded astonished.

“She has a career. So she must use her brain. And she meets all your other criteria.”

Hannah would know, he acknowledged inwardly. Except it appeared she was wrong— his preferences were changing. Had changed. His lower body, and not his now aching knees, was in total agreement. Hannah had been under his nose all this time with her quiet, efficient ways and non-intrusive manner, yet he would bet she knew more about him than he knew about himself. But she was leaving, so obviously she didn’t feel the same. No point in opening that door, especially as he lacked the tools. He ground his back teeth against a disappointed growl and clambered to his feet after carefully setting Hannah’s hands on her lap.

“I’m sorry she said those things.”

“Which ones?” She sounded intent, earnest, and peered up at him.

Hannah shrugged and those round breasts lifted higher on her torso. “No comparison. We aren’t even the same species, I don’t think.”

Benjamin laughed. That was the effect Hannah had on him despite all that had just taken place. He felt … happy around her. And there was that shift again. She’d been an enormous part of his life for over a year. He’d spent more time—awake at least—with her than any other person. His laughter faded when he imagined the future without her.

Hannah has made the decision. She’s going to quit, sick of silently, surreptitiously mooning over her boss, Benjamin Willis. Having finally come to terms with the fact that nothing will ever happen between them – he’s shown zero interest in her and each of his here-today-gone-tomorrow arm candy ladies were practically her physical opposite – Hannah has decided it’s finally time to move on. While Hannah and Benjamin had both always been painstakingly professional, Hannah’s two week notice was all the incentive Benjamin needed. He decided it was long past time they both acted in an entirely unprofessional manner. This is a steamy short story, perfect for “on the go” as described on the cover. I’m always a sucker for “secretary falls in love with her boss” stories, and this one was fun to read. I would have liked it better had the beginning moved a bit faster. The entire first chapter could have been tightened – Hannah rehashed their entire history and how she came to have the job. While this set-up to the story and background is, of course, important, I felt it could have easily been half the length, if not shorter. The scenario was in no way unique or difficult to grasp – where I often find more details groundwork needs to be laid – and for the last few pages of the chapter I was skimming to get ahead and start the drama and action of the plot. This was a bit disappointing to me and I really feel either tighter editing – or perhaps just peppering all the self-reflection and explaining it in later dialogue would have been far easier and kept the pace of the plot moving better. That said, once Benjamin reads her resignation and the two weeks until her resignation occurs, the pace moves far better to my mind. The sex scene was hot but I found it still strongly emotional. While there’s nothing unique to the general plot, I did enjoy both Hannah and Benjamin’s characters and his realizing Hannah was more than just his PA was fun and lovely to read. I’d be interested to look into other stories by this author. The characters were interesting and the short length of the story makes it perfect for when you want a quick, steamy read but don’t have too much time to devote to it. A good read for the train or for a short lunch break.

This is a quick read about Hannah Evans and Benjamin Willis. Hannah has been working for Mr. Willis for over a year now, but after a constant stream of women, she can no longer work for him while keeping her long held attraction to him secret. She decides to leave, walk away, in order to protect herself and find a way to move past her unrequited love. Benjamin is blindsided by Hannah&#039;s decision to leave. He thought she was happy, enjoyed her work, and they got along nicely. But now he&#039;s having to come to terms with why this is affecting him so deeply. Is there another man in her life? Not that that should matter to him. Is she sick? Or is she unhappy here? One thing is true... his body is waking up to something he&#039;s never noticed before. But can he make a move? Will she be receptive? Can it be that easy? I enjoyed this story and how it highlights that sometimes the best things are right under your nose if you&#039;d just open your eyes. The passion that these two have comes off the pages in wave after wave. When the sexual tension get thick, you can feel it on your skin. I did love that through it all, Hannah stayed true to herself. She gives as good as she gets and isn&#039;t afraid to speak her mind when the moment requires it. Benjamin may have been slow to game, but now he&#039;s here and he&#039;s a force to be reckoned with. I would highly recommend this book to anyone looking for a quick read to unwind after a long day. It&#039;s a very pleasurable read that will get your blood flowing.

I received a gifted copy of this new release by Allyson Young, but even if it was not gifted, I would have purchased it. I love her books and usually they are really intense, she told me this was a sweet read in advance and I said I can do sweet. This is a quick read as part of the Romance on the Go, but it was still enough for you to get the story. Hannah is in love with her boss and that makes it hard to work for him, when he is a love em and leave type of guy. She decides its time to move on. You really learn quite of bit about her for a short read and you cant help but fall in love with her character. The internal dialogue both characters have is funny at times. It doesn&#039;t take Mr. Willis, Benjamin long to figure out what he wanted was always right in front of him. Dont want to say to much, as anymore could spoil the book. If you are looking for a sweet, quick read from an amazing author pick this book up.