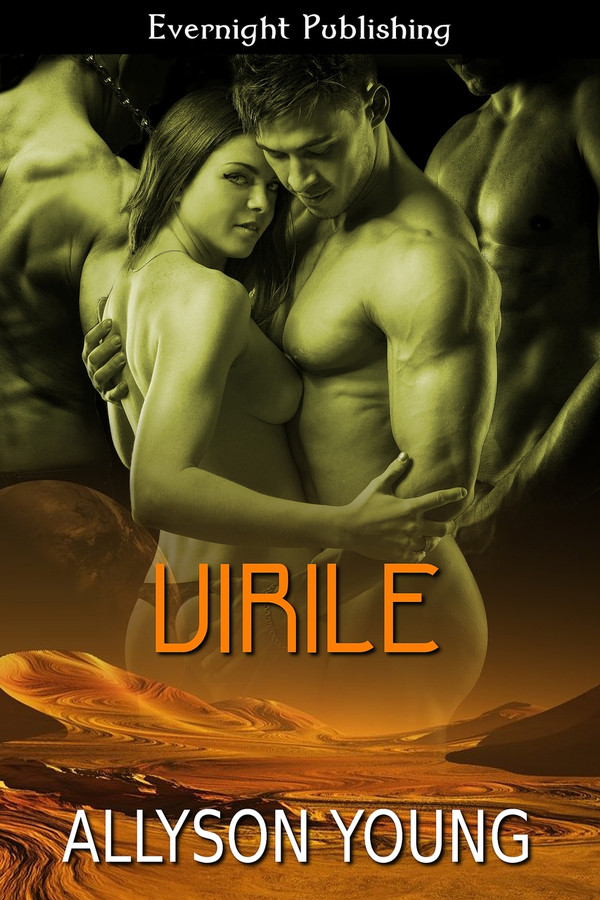 Wagered and lost by her wastrel brother, Adara Waycross learns she must serve three farmers for thirty days. If she refuses, the family estate is forfeit and her brother will go to prison on planet Virile, a harsh, ungoverned planet where women are scarce.
Doms Thorn, Orion, and Kellis Freestar saw Adara’s image and fell for her instantly. They will stop at nothing to have her forever. Expecting a gentle, compliant creature, they only worry about her inability to handle their sexual demands.
Unbeknownst to them, Adara’s a redhead. Freestar prophecy states a strong-willed, redheaded woman will complete three brothers, her surrender bringing incredible fortune. With this revelation, a month seems insufficient to tame Adara and elicit her surrender. The prophecy forbids them from telling Adara the truth, so the Freestar brothers are driven to push boundaries. And sometimes they step over the line…

Holy angels. Any sense of calm dissipated. Trying to control her breathing, aware that his peremptory order somehow made her pussy damp, Adara obeyed. She didn’t want another lesson. The material caressed her skin as she awkwardly pulled it from beneath her thighs and buttocks and then past her waist to tug it over her head. Thorn took it from her and tossed it behind them.

“You will be naked with us unless we tell you differently.”

She couldn’t help but glance out the window.

“We will protect your privacy, Adara, as you will come to learn, unless we find sharing your beauty is something you require.”

“Sharing? With more than you and your brothers?” Her voice squeaked with horror, and she swallowed against bile.

His tone turned cold, and he fixed that disturbing gaze on her. “No one will touch you other than us three, Adara.”

So what did he mean by sharing?  “As with everything we possess, we are proud to show others.”

A possession. She’d do well to remember that. The flattery seemed unnecessary or perhaps it was their way of talking to women they planned to use. They owned her for the next while and if they wanted to display her like a prize cow—or whatever passed for a cow here—then that’s what they would do. So others wouldn’t be allowed to touch her, merely ogle her—if she required it. Again, she struggled with conflicting emotions just thinking about it. She never thought she held exhibitionistic tendencies and certainly didn’t consider her plump body something people would want to look at, but Thorn didn’t seem to think that was the case. She shrugged, involuntarily. They would do what they would with her, and she would survive it.

“I feel your conflict, little one. You will come to trust that we will know what is best for you, what will give you pleasure and make you come to appreciate your worth. Now get over my lap.”

She wanted to refuse, or at least protest, then acquiesced, her breasts resting on the seat cushion just on the other side of his thigh, her belly centered on his thighs. The thick ridge of his erection nestled into her ribs as she turned her head to lay her cheek on the seat. She was probably going to get another ass whacking because she’d hesitated for god’s sake. A popping sound filled her ears, and something cool and viscous drizzled across her butt. She shivered, and his big warm hand swept into the substance, smoothing it across her ass and down over her thighs. It quickly warmed, the sensation deepening as it worked in and eased any residual soreness.

“Hitch up, Adara. Come up a little onto your knees.”

Gods. What was he planning to do? The tender care of her bottom confused her. As she followed his directions, more of the mixture dropped to ooze between her buttocks, followed by his fingers. One teased the gel over her back entrance, and she clenched against it. That earned her a smack, the sound reverberating in the close confines of their vehicle, but it didn’t really hurt. It did get her attention, as if him messing with her back there hadn’t.

“Relax and do not fight me, little one. This will not hurt you. A little uncomfortable perhaps, different, but if you cooperate it will go more easily.”

Fine for him to say—he wasn’t the one being penetrated in a hole that no one other than her doctor had seen. Thorn was spending a lot of time there, and she was positive she hated the edgy, forbidden feeling. Embarrassment and humiliation overwhelmed her, and she whimpered before she could bite the sound back.

“Shhh, Adara. This part of you will be well used, and you must be prepared so as not to experience injury. Deep breaths, agapi mou.”

She breathed deeply and did her best to relax, wondering what language he spoke and what he’d said. Probably nothing flattering seeing as he was now pushing one of those big fingers inside her bottom hole. She wanted it out and pushed tight with her muscle there. He slid in deeper—a lot deeper. If he went farther, she’d feel him in her chest.

Pulling that devilish finger out, he shoved back in before she could appreciate its loss. In and out it went, sometimes deeper, sometimes shallower. Just as she became used to the sensation another blunt finger joined the first, and she writhed to get away. Too big, too much. His other hand descended upon the small of her back and pinned her.

“You will, little one. Accept it now. There is no option.” He pushed in and separated those big digits, stretching her ever wider. He wasn’t rough with her, although she wouldn’t say he was being gentle either. Deep breaths didn’t help as much, and the bite of pain made her screw her eyes shut to hold back the tears. Her mouth opened to cry out when the jangling spits of pleasure overrode the pain. Thorn must have recognized the change in her response because he rubbed her back in concert with the movement of his fingers deep in her back channel. He sank those appendages in until the palm of his hand rested on her ass cheeks. Untried nerve endings sparked around them, and she clenched.

“Ah, there you go. Such a tight little fist around me. You will bring us such pleasure, as we will bring you the same.” He pulled back, dragging along the walls of her passage, then pushed back in, repeating the action. Adara wanted to squirm and press her pelvis against his thigh. Thorn the arrogant mind reader removed his hand from her back and leaned away far enough to slide it under her, unerringly finding her sweet button. An orgasm hovered just within reach.

“You will not come.”

Adara Waycross is less-than-thrilled when she finds that she has to spend a month on the planet Virile to settle her brother’s gambling debts. That feeling is nothing compared to her reaction when she discovers that will be serving as a submissive to not one, not two, but three brothers. Convinced that she doesn’t have a submissive bone in her body, Adara plans to teach these men a lesson they will never forget. In Virile, author Allyson Young introduces the Freestar brothers — Thorn, Orion and Kellis. When Thorn wins a month of Adara’s time, he didn’t realize that Adara would be fulfilling an ancient family prophecy. He and his brothers are eager to convince her to stay with them, even though her red hair serves as a warning of a volatile temperament. From start to finish, the author incorporates sizzling action into the story line. With BDSM, ménage and some smoking hot males, this is one story that packs some heavy steam. Adara is a strong, sassy character, which makes her struggles with submissiveness even more complicated. A smooth writing style, coupled with page-scorching action, keeps the reader’s attention. Add well-developed characters and engaging conversation, and you have the recipe for a fun erotic read. Granted, spending a month as a submissive to three Dominants may sound like a daunting task, but thanks to some creative choreography, Young vividly demonstrates the possibilities.

When her brother wages and loses her, Adara Waycross has two choices. She can either serve three farmers for a month on the planet Virile or the family estate will be forfeit and her brother will go to prison on that same planet for a month. She is only three months away from her twenty-fifth birthday when she can finally take over the family business and her finances, so in order to keep it, she has to be the one to go. Even if it means a month spent with three dominant males. Thorn, Orion and Kellis Freestar knew the woman in the printed image was destined to be theirs. It was all meant to be and they will take no chances on losing her. They do worry that the timid woman in the picture won’t be able to handle life on Virile, but images can be deceiving. Adara proves to have a spirit to match her vibrant red hair. Suddenly a month doesn’t seem like nearly enough time to claim their woman and fulfill the Freestar prophecy. This was a great book! The chemistry between the Freestar brothers and Adara heats up the pages of this book, but there is also so much more to this story. We actually get to know the characters along with some of the history of the planet. This is a very intriguing world with some really creative quirks and I can’t wait to read more stories from this world and this author. The sex scenes between the brothers and Adara are hot! The brothers are dominant in all the best ways and Adara is set on fighting her growing attractions and new sexual needs so she can walk away after her month is over. With so much at stake the sparks between them fly.

This was a really good book. I liked seeing it from Adara and Thorn&#039;s pov. Nothing went the way Thorn, Kellis and Orion thought it would with Adara. These four learned a lot from each other. I am looking forward to reading more by this author.

The Payment by Allyson Young