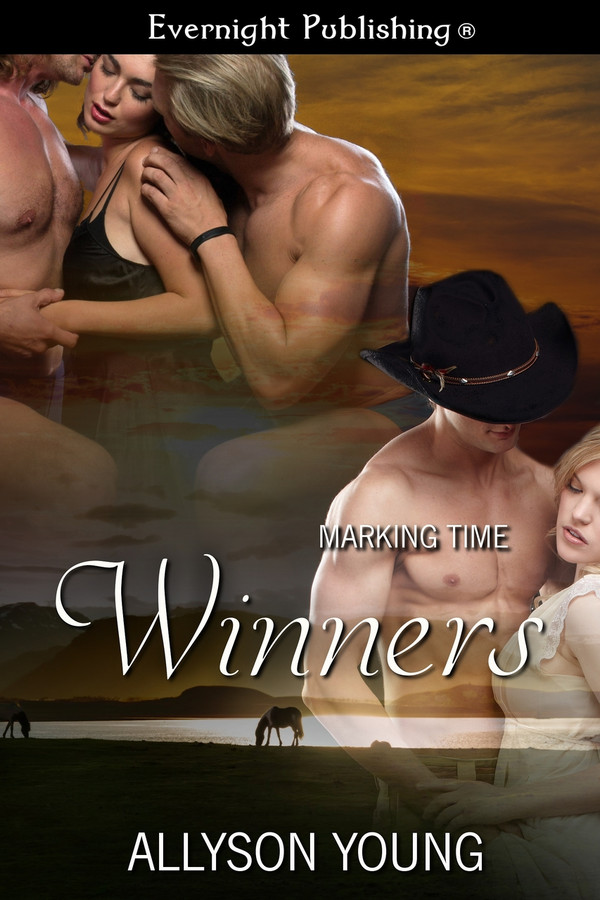 Vet-in-training Sinclair Renton, and her cowboys, Craig and Ashton Russell, are finding their way in ménage, just as Sheriff Reece Murdoch and poor little rich girl Candy Grant are rediscovering their historical connection—now flavored with a little kink, too.

But it seems love and passion can’t solve everything. Sinclair must face a personal demon in the form of the first woman Craig and Ash shared, while the brothers need to find ways to accept Sinclair’s profession and all the risks it carries. Candy, on the other hand, must deal with the legacy of her father’s benign neglect, and Reece has to face a surprising worry that he might not be enough for the woman he’s waited for. Will the lovers be able to overcome the challenges they face? Will they end up losing all they have fought for, or will they be winners in love?

They adjourned for the game, the men clearing the table while the women stacked the dishwasher, all talk of roles aside. Sinclair squeezed in between the brothers on the couch, her head resting on Craig’s shoulder, her feet tucked up on Ash’s thigh. Reece took the big easy chair and settled Candace on his lap, his hand slipping up beneath the hem of her dress to cup her buttock, his possessive touch screened by the position of her body. She snuggled close and pressed her head beneath his chin.

His team was doing well, a good thing, considering his inability to exhort them to victory, his attention drawn to the curvy bundle of woman on his lap. She smelled of carnations, something that now never failed to trigger his libido, and his fingers slipped to find their way beneath the scrap of material covering her sex. Hot, wet flesh greeted them, and she squirmed to give him easier access. Reece was transported back to high school when he and Candace stole similar moments, the forbidden, exciting sensations making him impossibly hard. He wondered how long their guests planned to stay.

“Behave yourself,” she whispered, but he noted she arched into his questing hand.

Withdrawing his fingers, he couldn’t restrain a smirk at her pout. He rearranged her on his lap, the better to ease the pressure on his erection, and winced as she shifted back. Yup, never a dull moment.

Sinclair didn’t much care for sports, but she figured she could manage the occasional game, especially if she could sit between her guys. The man chairs at home had to go—maybe they could get one of those sectional things with the seats at either end that reclined. She’d get the middle seat, and do away with the insert to hold the remotes and drinks. She could hold anything that needed holding, and her risqué thought made her lips quirk. Candy was right to infer she was turning into someone obsessed with sex. But it was more than that, far more. She loved her men with every ounce of her being, and once again thanked the powers that be for them coming to their senses. Otherwise she’d be someplace else, functioning, but without purpose. It should be frightening to realize her happiness was directly dependent on Ashton and Craig, except it wasn’t. She trusted them wholeheartedly.

Craig’s breath stirred her hair, and Ash traced lazy circles on her calf. Her entire being sparked like a static charge, and the air caught in her lungs with a delicious hitch. She was intensely warmed by the heat emanating from their big bodies, all muscled, honed from hard work on the ranch. Maybe they didn’t have to stay for the entire game, although the guys were focused in apparent rapt attention on the screen as several large men ran down a smaller man clutching the football, and jumped on him. The huffing and crunching sounds made her wince, but one by one the yellow jerseys peeled off the red one at the bottom of the pile. The announcer babbled in excitement, and Craig said something about turnover on downs. An imp of mischief overcame her.

It was a simple matter to pretend to stretch and rub her ankle over the front of Ashton’s jeans in a long, slow stroke, and “accidentally” drift her hand over Craig’s groin. She was rewarded instantly by a stir of flesh and hid another smirk. No doubt she’d pay for teasing later, in a totally pleasant way, so she risked another contact.

Ash caught her ankle in one big hand, his fingers curling right around it, unobtrusively pulling it away from his crotch—and separating her legs as he did so. The seam of her jeans was suddenly chafing against her pussy in an extremely interesting fashion, and when Craig dropped his arm to place it around her ribcage, his thumb and forefinger caging the nipple of her right breast, Sinclair dampened her panties.

She cast a quick glance at Candy and Reece. Her friend appeared to be dozing against Reece’s chest, likely as bored with football as she was, and Reece was staring at the screen. Which was a good thing, because Ash’s free hand twitched into the space between Sinclair’s thighs to cup her pussy, right when Craig pinched her beading nub. She barely swallowed a gasp of arousal, and couldn’t contain a shiver. Ash kneaded her heating apex, and raised one brow in a wickedly suggestive manner, his clever fingers driving her toward orgasm, Craig sensuously tormenting her breast. Lord.

Sinclair took in little hits of air through her nose, trying to manage her breathing and not pant too obviously. Okay, she’d started this, and in their inimitable style, her guys were finishing it, but she hadn’t thought it through. She didn’t want to come in the presence of others. Or did she? She had to admit to an illicit thrill of being pleasured in the same room with her best friend and her man, but she also felt safe—not judged. Ash pressed just so, and the burgeoning sensations crested. Sinclair went over with a shudder and a whimpering moan, masked by another outburst of the sports announcer. When she opened her eyes, Craig was staring down at her with love and tenderness, his cock an unmistakable solid presence against her hip. She knew Ashton was as aroused, but she wasn’t looking in his direction, the now sated imp of mischief suggesting she ignore him.