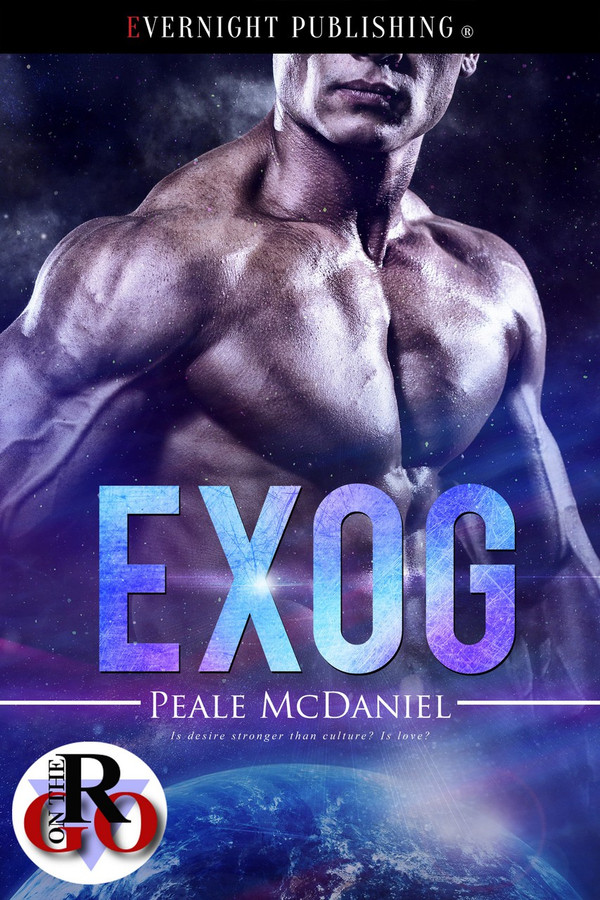 Exog. That's what students called it when you had sex outside your species. There was another word back home, a crueler one, a mob-howl of a word. Planetsiders weren't so tolerant.

Fin comes from an Earth where nearly everything is permitted—as long as it only happens between humans. Chrt’s people value reproduction above everything, and a non-fertile relationship breaks all the rules. What begins with curiosity will carry them to the limits of their conditioning. Is desire stronger than culture? Is love?

Fin didn’t know why he bothered to ask linguistic questions like that; every word in the ht language sounded just the same to him, like spitting. He wondered if Chrt heard words in the noises Fin made when he brushed his teeth. “There’s no translation, really,” Chrt said.

“Yes, I gathered that, despite my puny human senses,” Fin said. He reached cautiously toward the sensor, and it came forward to meet his finger, enclosing it in dozens of soft filaments that moved independently. The more solid center pulsed against his fingertip.

“Doesn’t that hurt?” Fin asked hoarsely. “Most of my sense organs don’t like to be touched.”

Chrt’s unoccupied sensors made a negative chop. “They’re pretty tough.” His hand caught Fin’s to hold it still, and the tendrils crept up Fin’s finger until they covered it up to the second knuckle.

“What can you sense with it?” Fin lowered his voice so it wouldn’t grate so. No way was he getting turned on by this.

“I can measure your temperature and your blood pressure,” Chrt said. “I can analyze your body chemistry and diagnose nutritional deficiencies. I can detect subtle muscle movements, but I don’t really know enough about chu-mans to make much sense of them. If you were a ht, I could tell from across the room whether or not you were telling the truth, which is why ht-ht hardly ever bother to lie. And I can smell-taste everything you’ve touched for about two days.”

“Wow,” Fin said after a moment.

“Your heart rate is elevated,” Chrt said. His other sensors were turning to focus on Fin. “You are afraid?”

“Exog” is the short form of “exogenous” and it’s an offensive term for those humans who have sex outside their species. In this version of the far future, humans are pretty much the only beings who are prejudiced like this, and while every other kind of sexual permutation is considered normal, going outside humankind to find a partner is somewhere between a taboo in polite society and utterly despised and rejected by others. Fin comes from Earth to go to an interspecies university and has a lot to learn about other species. He is curious, and as he gets to know his ht roommate, Chrt, better over time, begins to learn about his own prejudice. More than that, he starts to fight it since it becomes clear to him that he is very attracted to the alien who reminds him of a cat. Mutual questions soon lead to physical exploration, and as different as their bodies are, that is not even the most problematic area of their relationship. Fin and Chrt are both expected to return to their home planets. Fin so he can become an environmental engineer, join a family unit, and have sex with other humans. Chrt is expected to return and have babies – lots of them. Both break their species’ taboos when they develop “monogamous” feelings for each other, and neither even feels bad about it by the time they have spent three years sharing a room. Fin’s gradual discovery of Chrt and his species was fascinating. His recognition that the human xenopsychologists are not the only ones to have thoughts about interspecies relationships comes as a surprise to him, and their advice is very different from what he was raised with. I loved the gradual unveiling of a bigger truth, and all of the various cross-cultural situations and issues are very imaginative and fascinated me to no end. If you’re looking for science fiction that focuses on interspecies attitudes and relationships, if you want to see a young human gradually open his eyes to values and ideas beyond humankind&#039;s somewhat limited ideas of what is right and wrong, and if you’re looking for a read that is interesting, entertaining, has a touch of suspense, and might make you smile, then you will probably like this novella as much as I do. It had me turning the pages so I could find out what was next, while not wanting it to end because it was so wonderful.

It&#039;s not a long book, but the author packs just the right amount of world-building. The relationship between Fin and Chrt is sweet and believable, and I loved the idea that everyone had a xenofreakout was awesome. Very much recommended.

This was a fun read, and unexpected given the very standard muscle-bound-Arnie type cover. It&#039;s a sci-fi university story in a multi-species campus, where two roomies - one human and one not - fall for each other. The relationship was sweet, the sex was surprisingly hot given the ET aspect, but what I liked best was the world-building. The alien cultural details were interesting but the real strength was that the human details were very different from many current human cultures, altered by the effects if overpopulation and time. An interesting sci-fi read, which happens to be cute and sexy.