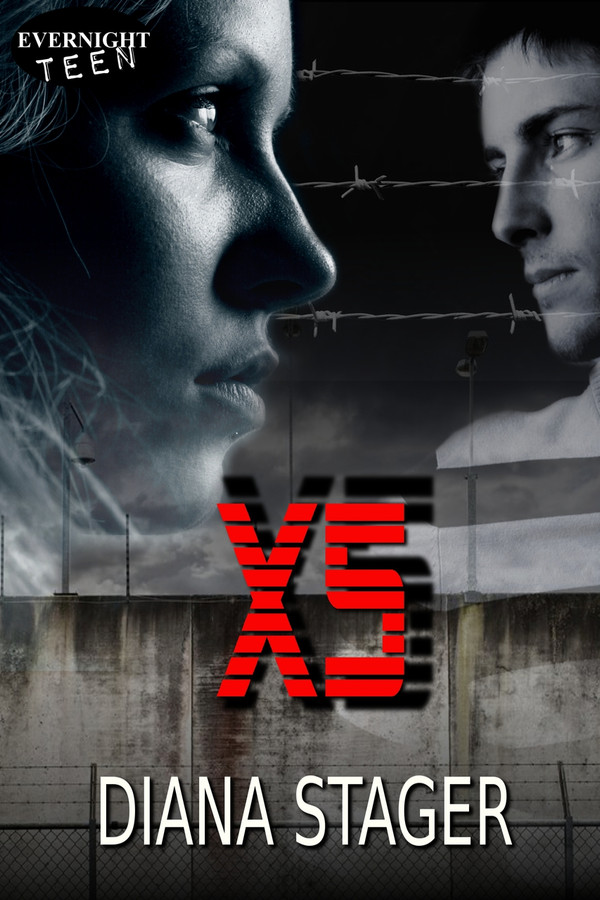 Being a socially awkward geek with anger management issues has made Travis Armstrong an outcast, but on top of that, he has visions of the future. Not that he can tell anyone, except in an anonymous online forum. When he takes a chance and meets with another group member, he winds up at The Bunker, where everyone is like him, and where, finally, he feels like he belongs.

Tara Gage has been at The Bunker since she was thirteen years old. Even among the residents there, she’s unique, and her special talents lead her to discover that The Bunker is not the safe haven it seems to be. She’s determined to escape and get back to her family.

When they each have visions of the other’s death, Travis and Tara know they have to run. With their captors desperate to get them back, they must rely on each other to get away before their visions become reality.

My foot jiggled in time to the song running through my head as I waited for my turn at the polygraphs. Travis was nowhere to be seen, and I was glad of that. Or that's what I told myself whenever I became aware of my disappointment at not seeing him. He drove me crazy, and really didn't seem at all exceptional, but a growing part of me didn't care about that, and just longed to be near him. Disgusted with myself, I tried to think of something else.

My thoughts were cut short when Travis and Mike entered the hallway, both looking upset about something. Their friendship puzzled me. I know Mike was trying to prod Travis into being more of a leader than a loner, but as far as I was concerned, it wasn't working. He was too introverted, too willing to follow along with what the rest of us were doing, or else go off by himself. Both of them sent anxious glances my way, setting me on edge, and just as I stood to go talk to them, the attendant called my name. Casting a last look their way, I turned and entered the polygraph room.

I tried to get through it as quickly as I could so I could find out why Mike had looked so worried. Of course, because I was in a hurry, things took twice as long as normal, and every second wasted irritated the crap out of me. By the time I returned to the hall, Mike was nowhere to be seen, and Travis was pacing back and forth. It seemed I had no choice but to talk to him.

Taking huge strides, I made it to Travis's side quickly and tapped him on the shoulder. When he turned, I hesitated for just a moment when my eyes locked with his, my stomach fluttering. Pull it together, Tara! I took a breath and then said, "What's up with Mike?"

Travis's eyes darted around and he turned to look over each shoulder before giving me a weird look. "Not much," he said finally, though he seemed to be trying to communicate something with his eyes. I frowned, and watched as his eyes widened, then darted to the side, his eyebrows lifting and then drawing together. What the hell? I shrugged and shook my head. Whatever he was trying to tell me wasn't coming across at all. He sighed and opened his mouth to say something else when something behind me caught his attention.

Turning, I saw a couple of armed security guards rushing into the polygraph room Mike had gone in. Remembering Cam, a band tightened around my stomach as my heart began to pound. Security only came to the polygraph rooms for one reason, and my fears were confirmed a moment later when they exited, holding Mike in between them.

"Mike!" I screamed, leaping forward to try to get to him. They couldn't be taking him away! What had he seen? My efforts to reach his side were blocked when Travis grabbed me from behind and wrapped his long arms around me. "Travis, let me go! Let me go!" I struggled against his grip, but it was like iron and I was getting nowhere. Lifting one foot, I kicked backward and connected with his shin. I heard him swear, but he didn't loosen his hold on me.

"Tara, stop," he whispered in my ear. "He knew this was going to happen."

I ignored him and screamed after Mike again. The security team nearly had him to the entrance to the administrative section of The Bunker. "No!" I yelled. "No, you can't take him! Mike!"

His eyes were full of pain when he turned to look at me one last time. I saw his mouth form the words, "I love you." And then the door slammed closed behind him. Hot tears streamed down my cheeks, my heart ached, and though my throat was raw and sore, I couldn't stop screaming. Travis wouldn't let me go no matter how hard I pulled against him. My squirming and wiggling wasn't doing any good, but I couldn't stop. The rational part of my brain knew that Mike was gone and nothing I did would help, but at the same time if I didn't try, I'd be giving up.

Suddenly I felt a sharp pain in my arm and when I turned my head, I saw one of the infirmary staff standing with a syringe in her hand. I tried to say something to her, but the edges of my vision were going fuzzy, and then everything went dark.

Diana has an excellent understanding of her characters, and allows them to speak for themselves - she doesn&#039;t &quot;try&quot; to bring them to life, she just brings them to life. The plot carries the reader with it and doesn&#039;t let go until the last page, at which point you are left feeling a little bereft because you wanted more, and hoping that the cliffhanger is an indicator that a sequel is in the works! I read this in one sitting, and found it a fabulous read, and all I can say is that Diana is an extremely talented author who knows exactly how to pull the reader in and keep them hooked on every page.

Since science fiction is a short leap between reality and fantasy, one can wonder what if reality somehow becomes a fantasy. Diana Stager has written a superb novel making us wonder, &quot;What if this really happens?&quot; Her characters are strong, imaginative, and very intriguing. The author puts the main characters through hardships an adult would find daunting. The villains are a group of people not to be messed with. Who to trust? Where to turn? What comes next? X5 raised a lot of questions to be answered (hopefully in Book 2). I cannot wait for the second installment! The leading characters, Tara and Travis, go through so much to get to the point of no return. The way they both have visions of each other...to-die-for! I loved every element about X5: the romance, the suspense, how the story builds and unfolds in layers. Ms. Stager has created a world that is original, thought provoking, dynamic...you name it! X5 has everything to offer a reader hungry for something fresh. Among many other aspects that I loved about X5, I truly enjoyed getting to read it from both POV&#039;s. It allows the reader so much more freedom in exploring the thoughts of the main characters rather than had it been solely from one POV. You can easily empathize and identify with the main characters. They are relatable and well developed. I cheered for Tara and Travis, cried for them...the way Diana Stager weaves her spellbinding story makes the reader feel they are there on the journey with them. X5 is an emotional rollercoaster ride. Buckle up, readers, you&#039;ll read X5 in one sitting and want more!