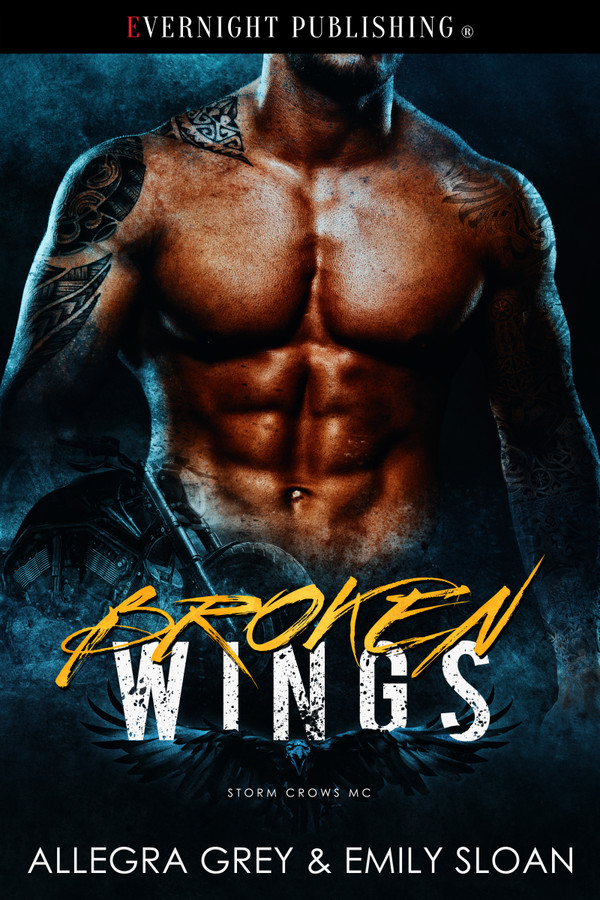 A dark country road leads newly-graduated Ashlyn Davis to the site of a terrible accident and the side of a dying man. Braving a storm and her total lack of internet or emergency training, she stays with him until help arrives. Under the blood and broken bones, her rescue is hot as hell—and twice as forbidden. As the Vice President of the Storm Crows MC, Joker is danger personified, but Ash forges a friendship with him and finds the steadiness she desperately needs in the unlikeliest of places.

But the danger that nearly killed Joker is far from over, and Ash brings her own brand of trouble. Can their friendship ever become something more? Or will danger—or death—keep them apart?

The call connected as she got up the nerve to touch his throat again, this time daring to press against his damp, unconscious flesh. He had a pulse. Not strong, but present. The call dropped. "Fucking merde, sheit, hell, dammit…"

Two more tries. First, the call dropped before it even rang. The next connected, buffered by the steady stream of frantic curses. “Please, you’ve got to hurry. It’s a bike wreck, and he’s… I don’t know how long he’s been here. His leg’s busted, and his arm’s pretty bad, too, and his helmet’s still on…"

The 911 lady sounded less than patient. “Well, can you tell me where you are?”

“The county hasn’t upgraded yet.”

Of course. Of fucking course. Why would Pharaoh County ever leave 1957? Panicked tears stung Ashlyn’s eyes, straining her voice. “I’m on the … County Maintenance 20 … North of Oak Grove.”

“Is that where Ryman Dumbrowski’s farmhouse burned down?”

“How would I know? I don’t know a-anything about this place! Google won’t load, and I just … just drive out along Route A, take County Maintenance 20. White Miata in the stupid road! I put the flashers on. Please!”

Powerless to move the ambulance, she fumbled his visor up, half recalling some Girl Scout leader talking about airways, and checking them. The guy made a pained, grunting noise. Ashlyn choked back a sob. I moved him, and now he’s dying. He’s dying now. God, why is this even real life?

Inside the helmet, his face was a bloody mess, but most of it seemed to be coming from his nose. And he kept breathing. Worst—or best?—his swollen eyes moved. Hard to tell if the slits were blinking or not, but she opted for yes.

“Shh, it’s okay.” She softened her voice, barely touching her fingertips to his neck again—the only bit of skin both visible and not shredded, sliced, or over obviously broken bones. “Y-you… Can you talk? Your name? What’s your name?”

His eyes, both of which were almost hidden in bruises but might have been brown or black, darted around for a few seconds before they locked on hers. “Nathan,” he said in a raw, rough whisper. The headlights kept his ruined face mostly shadowed, but she smiled, hoping to encourage him.

Nathan winced and his eyes shut. “Might … be faster … to go to them…” He sounded like he thought this idea did not belong to the same order of likelihood as Mr. Tumnus running out of the nearest oil well.

“Right. Yeah. First, um…” What do they do in TV shows? Shit, come on, what would Grey’s Anatomy say? “Tell me if you can wiggle your toes. Um. Your right ones. The left leg’s … kind of broken. Let’s not move it.” She figured that would take him a minute or two. He had long legs and probably a concussion, so it seemed like a big job.

Thunder rumbled again, and Ashlyn cringed, looking at her tiny, two-seater convertible. She focused on his legs. Big, much longer than hers, plus all the blood and swelling. Crap. Should I take his boots off, or does that make it worse? Oh God, I should probably tourniquet something… But what if I tie the wrong bit? Didn't someone say those were bad now?

“Moving.” He didn’t sound convincing, but if he thought his toes were moving, why argue?

“Okay.” She relayed the information into the phone. More syllables cut up into unintelligible nonsense answered. She took a deep breath, tried not to look completely terrified, and got off her knees to settle down onto the road beside him, ignoring the gravel biting into her hip and the unpleasant chill of wet dirt on her bare, shorts-clad leg. Do I keep him talking? If he has a head injury, he’ll die if he passes out. But he was already passed out once… Why the fuck didn't I get a nursing degree? Where is Google when I need it?

Nathan’s head tilted back in the helmet, or maybe it settled into the mud. “Th-think … they’re gonna make it?”

She glanced at him but a second later, her gaze rolled to the sky as fat raindrops landed on her arms and then the top of her head. Of course.

“They’ll be here, Nathan. Hold on.” She ran to her car, frantically tossing through the stuff piled in the passenger seat and floorboard. Her fingers closed around the Hello Kitty umbrella just as the sky opened up. She raced back and dropped next to him with a muffled shriek at the cold water rolling down her spine. Cold-as-hell rain would be Mother Nature’s choice today. Why not?

“I … I can’t believe … I’m gonna die here…” His mirthless laugh turned into a moan.

“Shut up. You’re not dying." The words came out harsh to forestall any further argument. After two fumbled attempts, the umbrella blossomed above them, shielding Nathan from another mouthful of rain.

“Well…” His gaze swept over her as he exhaled. “There … there are worse ways to go…" She glanced down to find her light pink shirt clinging to her bra and managed not to roll her eyes. Barely.

“At least your vision’s survived.”  She switched the flashlight app off—the headlights were bright enough. Better not to see Nathan’s injuries while she attempted to keep him conscious. The bone in his arm (or out of it, more importantly) was making her queasy.  Eternities dragged by. At the end of the universe, sirens wailed like a blessed choir of distant angels. Ashlyn sagged in relief until she realized they were still alone.

“Hey, they’re here!” She squeezed Nathan’s right wrist and touched his neck again to find his pulse. Weaker, but still there. He didn't answer.

Ash is trying something new. Something not involving her mother. But she never expected an injured and dying man on the side of the road would be her salvation. Broken Wings is first in Allegra Grey and Emily Sloan’s Storm Crows MC series. I enjoyed meeting Ash and Joker. Ash was so chill. She stepped into a world she didn’t understand with barely a misstep. The booze, the parties, the violence didn’t seem to faze her. Was it too easy for her? Joker couldn’t have a nameless descriptive of who he is. Grumpy would have been a better fit. But with Ash Joker blossomed. I love that Ms. Grey and Ms. Sloan showed Joker finding his center with Ash. Even though he knew she was hiding secrets…big ones, she lightened his soul. I enjoyed seeing Ash and Joker as unlikely friends morph into more. I thoroughly enjoyed this story by Ms. Grey and Ms. Sloan. There were unexpected twists and turns in this world they are creating. Danger surrounds Joker and Ash. Trust could lead to death but also a love forged with fire. I enjoyed this world they have created and look forward to where Ms. Grey and Ms. Sloan will take us next.

These are new authors for me and I wasn&#039;t disappointed! Joker/Nathan and Ashlyn simmered. Ashlyn comes home to visit her grandparents and one rainy night, saves Joker who has crashed on his bike. Joker is the VP of Storm Crows MC, his father is the Prez. These two come together gradually, I have to say I really liked the pacing of this book. The pair fall in love with each other realistically. I also enjoyed Ash&#039;s inner dialogue, it was hilarious. There is MC drama, for sure, and the other characters were not just background players. You really want other stories about them and I will be waiting to grab the next book. Ashlyn has a tragic story in her past that plays out througout the book, but, you don&#039;t get to know all of what it is until near the end of the book. Be patient, you&#039;ll understand her better when all is revealed. Joker is a complex alpha, who knows what he wants and makes it happen. I really got these two, not to be corny, but, they really completed each other(lol). Tree, Joker&#039;s dad was a very interesting character and has a history with Ashlyn&#039;s mom. The Storm Crow&#039;s were written well, thanks, Allegra Grey and Emily Sloan, for doing obvious research on MC&#039;s. The atmosphere of the book was palpable, I thoroughly enjoyed reading it. I don&#039;t know whose story is next, but, the heat from Grim and Megan has me looking forward to their story. Great read and well worth the price!

I had taken a break from biker books then read this one. I really enjoyed it. I can&#039;t wait for her next book.

I haven’t read a romance novel in awhile. This was definitely a good one to pick up the genre again. Read it!

This is a hetero romance that pulled me in even though I tend to only go for girl/girl novels. The main characters on top of being gorgeous are relatable and flawed. This book takes a while to get steamy but that built my anticipation even more. Loved it. Hope there are more I want to find out what happens next to my fav blonde hottie.