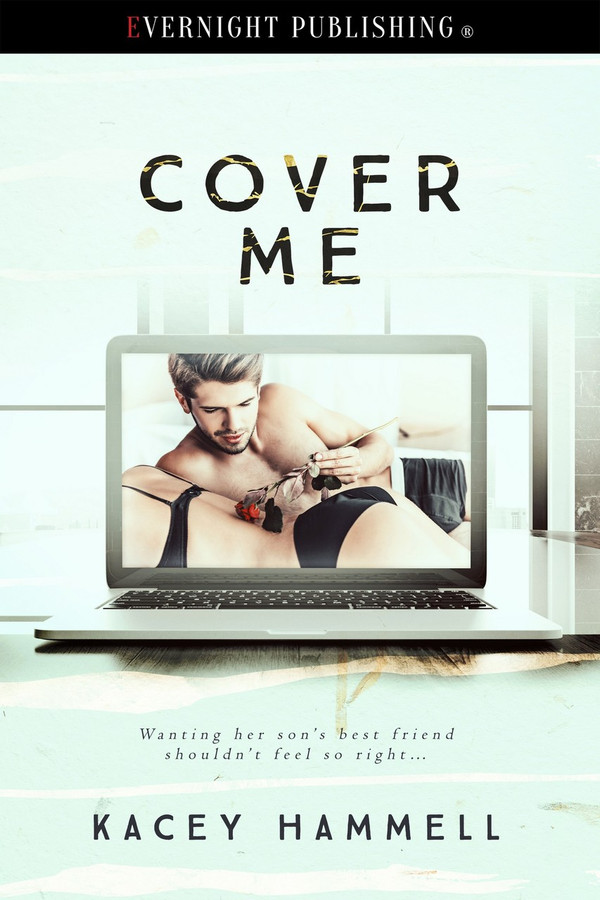 Jay Savage is one of the most sought after models in the business who seems to have it all. He’s the face of romance novel covers from coast to coast, and has expanded his brand to an executive role. Despite the endless possibilities in his life, Jay doesn’t have the one woman he wants most. She is everything he needs, and everything he can’t have. Their age difference isn’t the only obstacle standing in the way of convincing her they were made for one another. Leanne is also his best friend’s mom.

On Nita Lake to celebrate the marriage of her son, Leanne Hogan is faced with the most delicious temptation she’s ever encountered. Their smoldering heat burns down her defenses, and Leanne finds herself giving in to the only man who tempts her banked desires. They shouldn’t work. Can’t work. So why does it feel so right when she’s in his arms?

“I’m sorry if I’ve gone too far, Leanne, but I’ve wanted you for years. As soon as I realized what desire and attraction were, you’ve been the woman I wanted.”

She bowed her head, shaking it, and covered her mouth with one palm.

“I know you don’t believe me, but it’s the truth. I’m not even sure mere words can express how important you are to me.”

“No. You’ve lost your mind. It’s ridiculous. I’m so much older than you are.” She moved to the side of the bed, her face stricken and her arms crossed in front of her as if protecting herself from him. “The wedding and all … we’re just caught up right now because we’re here alone. You’re my son’s best friend, for God’s sake. Jay, it’s okay. We’ll chalk this up to crazy loneliness.”

Her attempt at a smile did little to appease him. There was no way he’d let her diminish his feelings.

“What I’m telling you has nothing to do with timing or loneliness or your son. Only us. And over a decade of feelings on my part for me to wade through.” She drew in a deep breath and opened her mouth. “Hear me out, okay?” he interrupted. “And be honest with yourself. There’s nothing stopping us to see what might be. We’re adults who are attracted to each other. There’s something between us, Leanne. I’ve wanted you for years. I don’t think I’m wrong to believe there have been mutual feelings on your part the last few times we’ve seen one another. Please be honest with yourself and don’t trivialize our relationship by telling me otherwise.”

Their gazes locked—in combat, he supposed, neither willing to back down from the tension circling the room.

“Oh, Jay,” she whispered, then turned to peer out the small opening between the curtains of the balcony door.

He wouldn’t give up on what they could have together.

Jay moved in behind her, he inhaled her sweet-scented mix of vanilla and strawberry. His mind raced imagining her spreading soap or lotion all over herself. He swallowed hard, shoving the thoughts away. “You’re the most amazing woman in the world in my opinion. I want to show you every bit of beauty I see. I wish you saw yourself as I do.”

He lifted his hands, cupping her shoulders and massaging the stiffness there. She sighed and lowered her head, as if enjoying the attention.

“It would be so easy to fall in to your arms and forget everything else. But Jay…” Her voice was soft and low, but he heard the indecisiveness and the deep-rooted hunger underlying her words. “I don’t live life by throwing caution to the wind. And you could have any woman in the world. I’m just an old house wife who—”

He pulled her back in tight against his chest, not wanting to listen to her denials. Jay pressed his lips to her neck, kissing his way over her skin. She gasped, then relaxed in his arms, her breathing quick and rough.

“I don’t want to be with anyone else,” he whispered against her ear. “No one else exists right now. You and me. Here and now. Hungry for each other, desperate to be together. I feel the tension in your body.” He raked his teeth along her neckline, doing a mental high-five as her hands balled into fists against her belly. “Damn it, I sense your need, too. But I won’t push you. But if you tell me to go…” He wrapped his hands around hers. “I will. But don’t think I’ll give up. I’ll keep coming back hour after hour, day after day, to show you how much I want you.”

Jay waited, arms around her, his dick ready to burst and his heart thumping to capacity. He sent up a silent prayer she wouldn’t say no.

“You’re right.” Leanne let out a breathless sigh. “I don’t want there to be anyone else here. Just you and me. But what if—?”

“Let’s pretend for tonight that what if doesn’t exist.”

This is not the usual love story but one that would make your heart ache to root for the couple. I am a sucker for a happily ever after and this novella had one. Cover Me is “May-December” romance. Jay is in love with Leanne, his best friend’s mother, and Leanne has always ‘liked’ or noticed his absolute hotness for some time. After her son’s marriage, Leanne decides to stay and have a vacation of sorts and Jay accompanies her. Ta-da, their attraction and chemistry is off the charts. That being said, for Leanne this becomes an awakening, where she not just learns to actually live, but heal herself from a failed relationship and eventual divorce. This is a short story but it showed the relationship progression between them. I wanted to see more of Jay and Leeanne. The book was a rollercoaster ride for me; it was a great erotic read with a story that should touch anyone’s heart.

I am a big fan of Kacey&#039;s books, and I really loved this May/December romance where it was the woman who was the older partner. Kacey rocked this one! I thought Jay was a great character because he was so atypical for how you would expect someone in his shoes to play. Leanne has had a lousy relationship with her ex-husband, and her grown-up son sees this. His best friend does too, and he&#039;s been in love with Leanne for years. Her son is well-aware of the fact. When they are all at Beau&#039;s wedding, both Leanne and Jay are staying at the venue for the next week, so Jay has that time to convince Leanne of his feelings. The usual older-woman concerns come up, but Jay does his best to show her his feelings, and it turns into one of those reads where you just want to grab the guy up for yourself. You will have to read for yourself to find out if there&#039;s a HEA.

Is it hot in here or is it just me? Oh my goodness, Cover Me is filled with sexiness that will require a cold shower. Jay has been smitten by his best friend&#039;s mother for as long as he can remember. So after years of pinning, Jay gets the opportunity to make a move on Leanne and he&#039;s going to put it all on the line. But can Leanne handle the age difference and be able to put her own insecurities aside to grab hold of the love Jay is offering? I loved how Jay is determined to prove his feelings towards Leanne no matter what anyone may think. The way he tries to build up Leanne&#039;s self esteem is honorable. The passion between Jay and Leanne is electrifying. In the end, I adore the underlining sentiments that love can come from unexpected places and age is just a number. I recommend this quick, sensual, heart stopping read that will keep you captive until the very end.