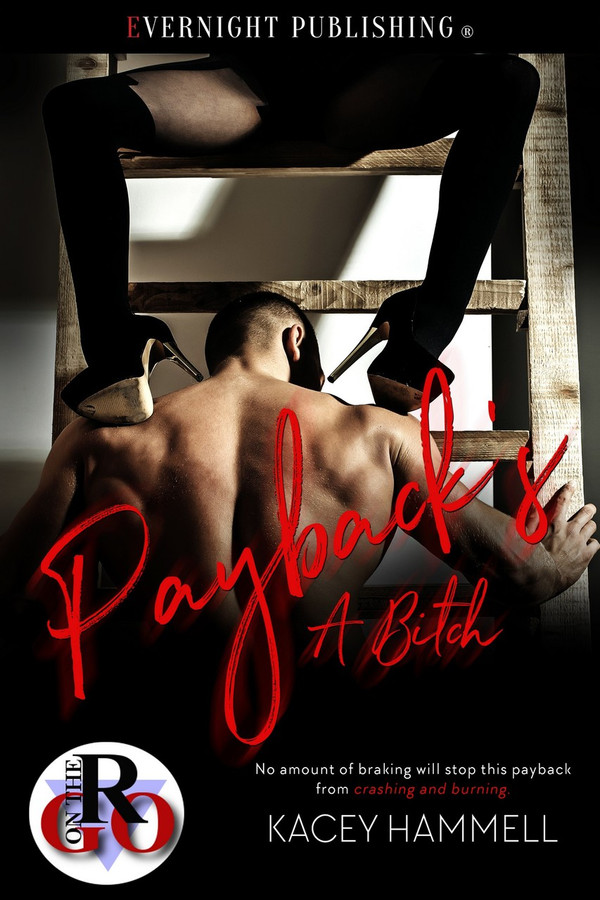 Race car driver Lark Stevens agrees to help a close friend prove that paybacks can be a bitch. But what she doesn’t expect is to fall in lust with her mark. Or is he who she thinks he is?

Set on her mission, Lark assumes the mystery man who amps up the heat and pushes her heart into overdrive is her intended target. And once they connect, getting even is the last thing on her mind.

As the heat smolders and revs from zero to sixty in mere seconds, Lark realizes she's on a crash course of emotion that no amount of braking will stop.

Get ready for no holds barred sexual teasing, dances meant to titillate and push you over the edge, and M/F love scenes to get engines revving.

This is a previously published work. It has been extensively revised and edited for Evernight Publishing.

“Are you sure you’re okay doing this? It’s a lot to ask. You haven’t done this since college.” Lark’s best friend and business partner, Eli, sounded tense on the other end of the phone.

Annoyed, Lark sighed. She’d already agreed to his request, and they’d talked it to death. “Of course, I’m sure. Everything’s great. I’ll be at your office tomorrow afternoon around three.”

“You know this is for fun. Just a bit of payback for Aaron.”

Lark strolled to her bedroom closet, eager to see a few of her favorite things. She slid the accordion door open, anchored her phone between her cheek and shoulder, and reached behind a wad of hanging clothes to retrieve a plastic garment bag.

As she unzipped it, she smiled at the exquisite silk and leather. She hadn’t worn the more risqué skirts and tops in her closet for a couple years. Not since her last boyfriend, who hadn’t appreciated the adventure in their sex life. But she loved wearing leather or spandex. The material slid along her skin, bolstering her confidence and sexiness. Her heart rate raced from zero to sixty in anticipation. Lark shivered, hit the speaker button on her cell phone, and then dropped it on the nightstand.

“Aaron won’t know what hit him. He’ll definitely understand the meaning of payback’s a bitch when I’m through with him.” Lark laid four outfits on the bed and pondered them.

Red, blue, and two black mega-short skirts with silk, midriff-baring halter tops—but which was best for a fun prank?

“Just don’t hurt him.” Eli’s gruff voice hinted at concern for his longtime friend, who was about to be punked.

“Don’t worry. I’ll treat him like my Chevy Impala, and shift him gentle.”

She lifted the red set. Perfect. Lark got on her knees beside the bed to look underneath and reached in as far as possible. Once she touched the tops of the matching red stiletto knee-high boots, she grinned. This outfit topped off with her vibrant red wig would be the icing on the cake. Yes. She yanked the heels free from their hiding place.

“There’s nothing to worry about. You go do your business with Fairfax Motors and land us a new sponsor, and I’ll take care of your good friend,” she said.

“Aaron’s mentioned financially backing us, too. That’d be great for us.”

Lark sat on the side of the bed. “Great. We won’t turn away money. But—” she frowned. “You’re not pimping me out to score some green, are you?”

“What? Jesus, Lark,” Eli shouted over the line. “I’d never do that and you know it. What do you take me for? We’re business partners, for fuck’s sake, and have been friends even longer than that! Hell, you’re the top female racecar driver anywhere. I’m not biased either. Besides, I’m not a lame chump, ya know.”

She laughed. “Okay. Okay. Stop groveling, you big baby. I hear ya. Go make us some moolah. I need to get pretty for tomorrow.”

“I’ll call you around five to tell you how he reacted to the prank. And thanks, babe. You’re the best. I should be finished my meeting with Fairfax by then. I’ll be miles across town or I’d ask you to dinner.” Eli chuckled. “I should have set up a videotape to see Aaron’s face.”

“No freaking way, buddy.” She tossed her jeans and underwear into the hamper in the corner. “I’ll give you every delicious detail. Gotta run. Ciao.”

She ended the call, then grabbed her robe from where it hung on the bedpost and strode into the bathroom.

Lark loved this room. The white walls and floor tile sparkled in the sunlight shining from the skylight she’d had installed after moving in. It was her sanctuary—her getaway from the dust and sweat from the track, and the demands on her time—and where she did her best thinking. Plus, racing at full throttle almost every day made her shoulders tight and rigid, and she really needed to soak the tension away.

Her seventy-two-inch claw-foot bathtub had been the final nail in the coffin in her decision to buy this house. Some days she lived in her tub.

Lark set her belongings on the vanity and turned the taps to fill the deep, cast-iron oval tub. She turned and shed her favorite “Race Car Drivers Like It in Overdrive” t-shirt and sweats that Eli had bought her last year for her birthday.

She bunched her hair up and back with her fingers, tugged the long tresses into a ponytail, and then peeled off her bra and panties.

Pleased with the way the day had gone, Lark smiled. She’d accomplished the second win she needed to advance to the next round of competition. Excitement for tomorrow filled her. She and Eli always had a blast; they shared a twisted sense of humor. Pulling one over on his best friend was going to be a lot of fun: Lark was going to deliver a simple bump-and-grind lap dance that had him sweating. It’d serve Aaron right for pushing some dude on Eli six months ago, trying to prove Eli was gay. She wanted to avenge her best friend, who hadn’t yet admitted his sexuality. They’d touched on the subject a few times, but he’d adamantly refused to confirm. She’d never pushed Eli into admitting what she suspected was the truth. And the realization that Aaron had tried to force Eli into something he wasn’t ready for irked her.

Prank or not, she loved putting on her shit-kicker boots, dressing to kill, and putting on a good show.

Teaching someone a lesson or two added to the thrill of dancing sexy again and pulling off this prank. When she finished with Aaron, all he’d see was her taillights as she left him teased and confused.

Paybacks were such a bitch.

This story by the awesome Kacey Hammell is all about payback, and maybe how the best laid plans never go quite how we plan. Our heroine is a race car driver who is helping her friend and manager get back at his friend and perpetrator of primary wrong, Aaron. Lark is to meet Aaron at her friend Eli&#039;s office to hit him with this payback. It&#039;s the perfect plan. What could go wrong? Indeed. This was an enjoyable story, and it flowed along nicely. As with all of Kacey Hammell&#039;s books, it had well-rounded characters that I was invested in from the start. Granted, I saw the whole plan unraveling, and it was pretty funny. Lark is a wee bit too aggressive at times for me, but that&#039;s all a matter of personal taste. This is still a great book and fans of Ms. Hammell&#039;s are sure to absolutely love it! - See more at: http://erotic.theromancereviews.com/viewbooksreview.php?bookid=13896#sthash.vXABSKF7.dpuf

This is one hot read. Lark is something else. I love that she is a strong woman and takes what life gives her with both hands. She is a risk taker and is more than ready to deal with what ever comes her way. Never did she think that doing a favor for her best friend would lead to the chaos that it does. I enjoyed seeing just where Lark&#039;s story would go and hope that we get to see more from her in the future.

Yum! This book delivers that moment when a heroine is pushed passed teasing and temptation. The author doesn&#039;t breeze by the change in need. Nope, she lets you take a ride as the heroine&#039;s desire sky rockets. It&#039;s quick. It&#039;s dirty. It&#039;s satisfying. An excellent evening read.

What&#039;s hotter than a woman who takes charge? Now much when it comes to Lark. She&#039;s a woman that is sexy inside and out, and isn&#039;t afraid to use it her advantage. So when a friend calls asking for a favor, she jumps at the chance. But what was supposed to quick and easy, turns into something she never expected. The passion explodes, desires escalates, and inhibitions obliterate. If you are looking for a quick, sensual, exhilarating read, than Payback&#039;s A Bitch is just want you need. But be warned, things get hot real quick, so a ice cold bath will be needed when you finish this titillating tale.

Pull out your fans and grab a glass of ice cold water because, Kacey Hammell&#039;s quick read, Payback&#039;s A Bitch, is steaming hot! Disclaimer: I received a free copy of this book from the author. I was not required to write a positive review, and have not been compensated for this. This is my honest opinion.

Lark agrees to pull a prank on an unsuspecting acquaintance but when she actually sees him for the first time, boy do the sparks fly! You may want to have a fan and a cold drink close by when reading this!

Cover Me by Kacey Hammell