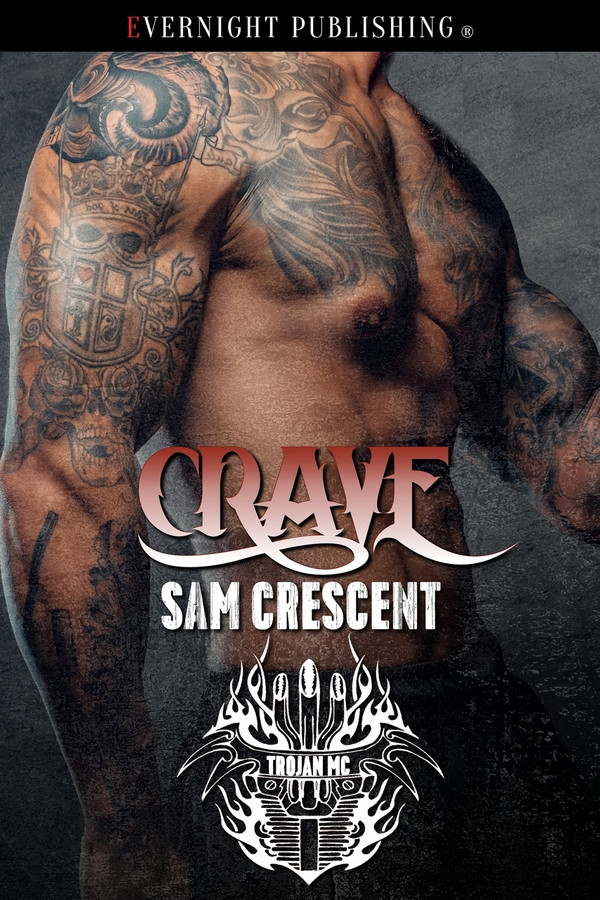 He's craved her for a long time, and now he's going to have her.

From the first moment Chip saw Kasey, he knew without a doubt he wanted her. He didn’t even know her name, but she was going to belong to him. Now he is ready to claim her, but one of his club brothers seems determined to claim her for himself as well.

Chip will not lose this fight. Kasey’s his, and he’s going to prove to the nurse that he’s the guy for her.

Knowing the Trojans MC through her work at the hospital, Kasey doesn’t think much of the bouquets of flowers, figuring they were a friendly gift. But when Chip asks her out on a date, she realizes it’s more. Her attraction to Chip surprises her. She’s never seen herself with a club man, but with every second she spends with him, she can’t imagine a life without him.

The Trojans MC are in danger, and the threat they face could completely kill the entire club. No one will back down, nor will they allow Duke, their Prez, to fight their battle alone. Can Kasey handle the pressure of being a Trojan’s woman? Will Chip survive to prove his love?

She chuckled. “This couldn’t be any more awkward if we tried. I know you like me, Chip. I know you want to date me, and I also want to date you.” She stared up at him. “Can I be honest with you?”

“About everything. You don’t have to hold anything back.”

“You’ve never had a guy bend you over, and fuck you so hard because he couldn’t resist for another second not doing it?”

She sighed. “You make it sound so perfect.”

He chuckled. “It can be so perfect, Kasey. There’s been many a surface I’ve wanted to just fuck you on. Of course, I’ve not done that. I don’t want you to think I’m hurting you. I want you. I hope you have no doubt about that.”

Placing his hand at her knee, he began to slide it up and down.

She stared at his hand. Her pussy was already wet, now even more so just from his touch alone. He made her ache.

Taking hold of his hand, she locked their fingers together, wanting his touch.

He cupped her cheek, tilting her head back so that she looked into his green eyes. “Why don’t we take it one step at a time? Don’t plan anything. You’re my woman, and I’m your man.”

The way he looked at her, the hunger in his gaze—unable to resist for even a moment longer, she held the back of his head, and pulled him down to kiss.

The moment his lips touched her, her nipples beaded and she released a little moan, needing more, needing him.

He stroked her cheek at the same time she teased her tongue across his lips. When he opened his mouth, she plunged in, tasting him.

Her pussy was on fire with the need to touch, but she didn’t take it any further than kissing him.

“I only have so much control,” he said, pulling away.

He took her hand, placing it over his dick. “This is what you do to me. I can only take so much.”

Sam Crescent brings readers back in to the fold of the MC with this BBW romance. Chip loves his club and his deep ingrained feelings illustrate his strong personality. His determination to win Kasey over is endearing and showcases his emotions beautifully especially as it concerns members of the club who are like brothers to him. Kasey is such a fantastic heroine. She’s curvy and as beautiful on the inside as she is on the outside. She isn’t the typical motorcycle club woman. She doesn’t judge anyone or their lifestyle. As a nurse it’s great to see her ingrained desire to help people shine through. I enjoyed the entire situation with the seriousness happening with the club and how it impacted the budding relationship. I will admit that a few scenes were a little more intense than I am used to but did seem necessary to the story so it didn’t put me off. If you enjoy strong and commanding biker heroes and sexy and curvy heroines, this is one for you. The Story: Chip fell for Kasey before he even knew her name but he didn’t make a move and now that he finally has another member of his MC has also decided the curvy nurse is worth the effort. But Chip will do whatever it takes to make Kasey his.

Crave is the eighth book in the Trojans MC series by Sam Crescent. It’s a good biker story with great characters who immediately caught my attention. I love this biker series that always has something gritty and exciting happening in every book. Kasey is a friend of the club who finds herself being courted by two of the club members. There was a lot of self reflection, light humor, and hot sexy moments. Personally, I never thought there was any contest between Chip and Pie. Chip was so intense and take charge that man could’ve had any woman he wanted. He wanted Kasey and so the minute Pie made his move it was game over. Chip wasn’t taking any chances on losing the woman he had chosen for his Old Lady. I like a man who can take charge. Kasey only liked Pie as a friend anyway, but she did have a few doubts about the club lifestyle. A lot of other situations were happening, as well. The club was still having trouble with the Abelli mafia and Duke has finally had enough so war seemed imminent. Sam Crescent’s writing was excellent on this fast paced story. The plot was complex and very well developed thanks to the rich back story involved in this series. The characters were amazing as usual. This book was a great addition to the Trojans MC series. Now, I cannot wait for Pie to meet his match soon.

I love this author and this series. And I will keep on reading it until she has found a happily ever after for each one of them. Chip has been attracted to Kasey since he saw her at the hospital and he finds that now is his time to claim his women. But he has some competition in the form of one his brothers wanting the same women. Kasey is a nurse at the hospital and she is just living her life, wanting to help people and spending time with her hilariously funny neighbour Lindsey. She can&#039;t understand why two bikers are all of a sudden interested in her. So when Chip asks her out on a date she figures out that maybe it can be something more than just a friendly gesture. I enjoyed this story. What I liked about Chip was that he was so laid back he just took his time getting to know his women and he wasn&#039;t phased at all about Pie&#039;s interest in her. And that&#039;s how he won her over. Meanwhile: The club is in a turmoil. After the death of the previous prez and his women, things are not the same. Holly is in shock and depressed after her parents death and Duke has no clue how to get her out of her funk. How are they going to get rid of their enemy and will things go back to the way it was. Or will this be the end of the Trojans MC

Once again sam did a wonderful mob! Excellent story! Is Pie going to get a story soon? I can&#039;t wait!

Another great book by Sam. Love all of her books that I have read. Sam is a great author. I recommend her books.

This series just keeps getting better with every book! So much drama and passion! I just want more! Please keep then comung!

After what happened in the previous book, Trojans are in the black mood. Like they are waiting for another shoe to drop. They club already lost their members and there&#039;s a big possibility that they could lose more. So, it isn&#039;t easy for anyone at the moment. And when I came up to a certain moment in the book with each couple from previous books.... Well, it felt like the end of the world is coming, the feeling was that ominous. Will Trojan&#039;s prevail? Or will it be the end of the club? And in a middle of all that doom and hostilities, Chip&#039;s and Kasey&#039;s connection is growing. It&#039;s beautiful, but at the same time it&#039;s a bit bittersweet. Because Kasey lost loved ones before and she barely crawled out of the black hole she fell in after loosing them. If she lost Chip now... Well, there will be no going back after hitting the bottom this time.