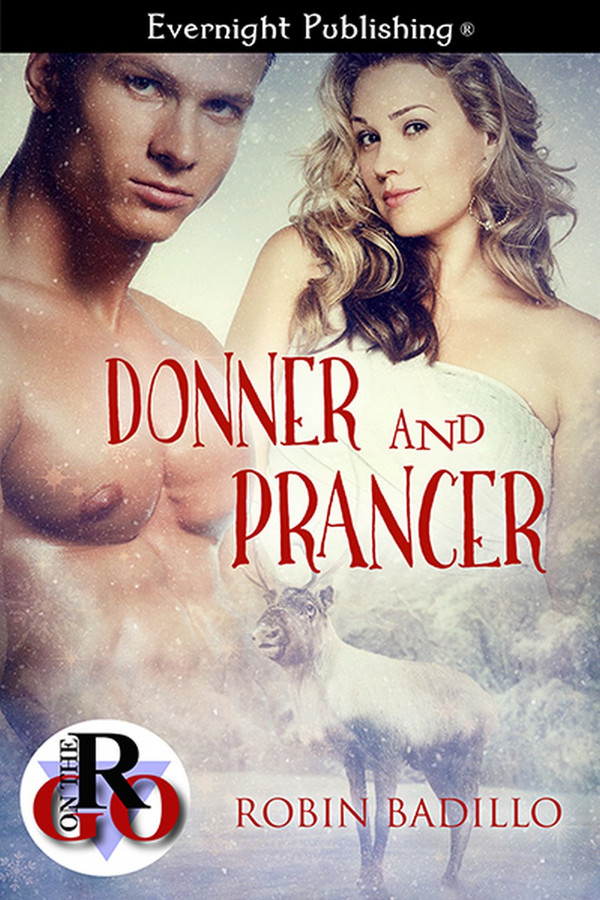 Noah Donner had it all. Good looks, great job, and a kick-ass gift. As a special breed of shifter, every Christmas Eve he assisted Santa as one of his famous reindeer. A lover of all women, he’s the quintessential playboy. But all that changed within weeks of Christmas, when he found himself drawn to another reindeer shifter, Mira Prancer.

Not exactly sleek reindeer material, full-figured Mira took pride in her gift as a shifter, while not nearly as confident about herself when in human form. Usually a timid wallflower, Mira is surprised to learn she’s Noah’s latest target, and after a drunken night of unexpected passion, they find themselves in a quandary.

Neither can deny the attraction, but Mira will need more than words to trust the sexy Casanova. Can the two love-struck shifters play nice? Or will this little reindeer game require a little Christmas magic?

Noah nudged her against the door, closing it behind them.

Mira gasped. His smoldering expression turned her stomach upside down, and heat pooled between her legs. Had he cast a spell, stealing away her ability to escape? Her skin tingled at the thought of giving in to his silent intent.

Noah’s hands found her midsection and needy eyes drank her in as though she were a mug of hot, buttered rum on a cold winter’s night.

I’ve totally lost my mind. “Is this really happening?” Did I say that aloud?

Noah’s eyes gleamed and a mischievous grin spread across his face. “Oh, it’s happening.” He slowly leaned in, and his lips grazed hers, immediately followed by his tongue. Warm swipes plunged deeper with each pass, triggering moisture that dampened her panties.

Mira’s knees buckled and Noah scooped her up into his arms and carried her to the sofa as though she weighed next to nothing.

Mira could hardly catch her breath. This was crazy. Insane. “Get the fuck out!”

Noah stopped. A look of confusion and shock flashed in his eyes. “What?”

Mira laughed, covering her mouth as heat rushed to her cheeks. “I’m sorry. That sort of slips out whenever I’m surprised.”

She bit back another laugh and went with an enthusiastic nod instead.

Mira’s head spun and she strained to sit upright. How could she explain this? “Men like you don’t come home with women like me, Noah.”

“Be-because,” she said stammering through her reply. “Look at you.”

Noah rose and stood by the sofa, gazing down at her. “What about me?”

“Uh … well, you’re built like a Greek god and you have a reputation as a …” She searched for the correct words—words that held a little more delicacy than man-whore. “Ladies’ man?”

“I was being polite.” Mira squirmed.

Noah’s eyebrows arched high. “Is that so?” He folded his arms across his chest. “Why don’t you tell me how you really feel, Mira?”

Bile shot up in the back of her throat as her nervous demeanor morphed into one a little more hostile. “How I really feel?” Dozens of irritating things about the man came to mind. Everything from his obnoxious, too-loud laugh, to the ugly reindeer sweater he wore, to the Christmas party every friggin’ year. “Well … for starters, you brag about your conquests entirely too much.” She’d keep her comments limited to the facts rather than opinions. “You treat women like trophies and well … you seem to have a serious problem with my ass.” The last part flew out of her mouth so fast she had no time to reel it back in.

A new take on classic characters! No spoilers here. Donner has his eyes on the prize from start to finish, but Prancer needs some convincing. The only thing keeping me from giving this love story 5/5 is Mira&#039;s response to coming face-to-face with something she already knew. I always have a hard time wrapping my brain around extremely emotional reactions to previously known details. But other than that, this was a great holiday read!