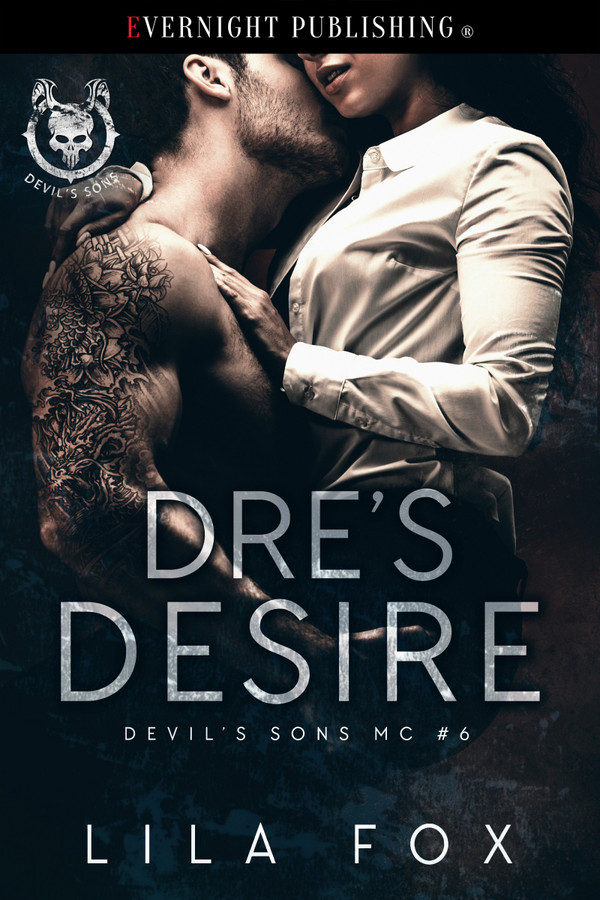 When Dre stumbles on a woman suffering a horrific attack, he saves her and sends her on her way. Instead of moving on with his nomad brothers, he realizes he can stay on with the Devil’s Sons, his brother’s club. Now that he’ll be around for a while, he learns the woman’s name and goes after her. He intends to make her his own, but she fights him every step of the way.

Kyra has been told many times in her childhood that she is unattractive, and she believes it. That’s why she thinks it’s a joke or a bet when Dre pursues her. Why else would a sexy biker be interested in a woman who’s never been wanted?

Dre finally gets through to her, but before they can look forward to the future, Kyra faces danger. The person who attacked her has returned. Targeted by an enemy and confused about trusting Dre, Kyra must make difficult choices or lose this chance of happiness.

Dre made it to Kyra’s door and tried to open it, only to find it locked. He pulled a card from his back pocket and was in within a minute. Hell. It was way too easy. When he got her into his room, he’d put a better lock on the door to keep her safe.

The room was dark because she’d pulled the drapes together to keep out the sun. There was just enough light to see her in bed. The covers were pushed down to the bottom of the mattress, so he was able to see her in a tight t-shirt and white panties.

Right away, he could feel his heart rate pick up and his cock hardening so fast it burned. He stripped down to his skivvies and crawled in behind her. He pulled up the blanket before he tucked her against his body.

Fuck yeah. This was where he was supposed to be. Even as tiny as she was, she fit in his arms perfectly.

He couldn’t believe it when he started to fall asleep. He hadn’t taken a nap since he was three, maybe.

When he opened his eyes, he saw more shadows in the room and could hear some guys outside, and he figured they missed dinner.

He finally noticed the tension in her body, which told him she was awake and probably trying to think of a solution to getting away from him. The thought made him grin. Yeah, babe, that’s not going to happen.

His hand pressed against her stomach to bring her tighter against his chest, and he moved one of his legs between hers, pressed it tight against her cunt, and waited for her next move.

She tried to pull away from him, but he just tightened his grip. She still thought he was asleep and was trying to run from him again. He should be pissed, and he was a bit, but he also found it was funny that she thought she could leave him.

Her time for running was over. She just didn’t know it yet.

He had to bite his tongue to keep from laughing when she exhaled and sighed in what he guessed was frustration.

“Dre?” she whispered and tapped on his hand. She tried to turn toward him when he didn’t say anything, but he tightened his grip. “Dre,” she said a little louder. “Wake up.”

She glanced at him over her shoulder. “What are you doing in my bed?”

“You wouldn’t talk to me, so I decided to be more proactive.”

She growled when he still wouldn’t let her turn over and shocked them both when she slapped his hand.

“Really? That’s what you call violent?”

I absolutely loved this story! Spoiler Alert Dre has been on the road for a very long time helping his Brother gain the knowledge needed to build one of the most successful MCs. Kyra just wants to work her job and separate herself as far away from her past as possible. Fate has a different idea when Kyra finds herself in the clutches of her abusive former stepbrother. Just when Kyra think the worst is about to happen Dre flys in and saves the day. Only not without a costs, Kyra is his she just doesn’t know it yet. Lila Fox takes you on an amazing ride while these two unlikely love birds navigate life’s twists and turns right into each other’s hearts. I received a free copy of this book via Evernight and am voluntarily leaving a review.

This book is part of the Devil&#039;s Sons MC and I think that if you have not read the other books in the series, you would be ok reading this alone. There may be a little confusion, but not a whole lot, you can still enjoy it. And Enjoy this book I did!! Dre and his brothers have been traveling around for the MC, but are thinking of settling down with his brother at the clubhouse. They get to town and are at a bar and come across Kyra and her friends. Dre see&#039;s Kyra with her stepbrother Dirk and he&#039;s trying to attack her, her intervenes. He is such a gentleman and treats her so sweet. Fast forward a little and they end up deciding to bring her and her friends to the clubhouse for protection. There&#039;s action, miscommunications, romance, humor and of course a happily ever after. I loved how Dre was not afraid to talk with his MC brothers and their old ladies about what to do in situations despite being this gruff MC guy. This book seemed to have it all.

I have read all the books in this series and have never been disappointed. Looking forward to the new releases

I have this whole series, I love it, alpha males, gental women, and how they tame each other

Dre and a few other Nomads come to visit his brother Fury, the President of the Devil&#039;s Sons MC. Kyra and a few of her friends go out and they definitely could have chosen a better bar to go to. Kyra&#039;s stepbrother Dirk shows up and things get nasty real fast. Dre coming to Kyra&#039;s defense could be the best thing that could happen to both of them.

I easily fell in love with Kyra and Dre’s chemistry. The longing they both have when they see their friends and family settling brings out a good side to this story. Also the protectiveness and love that Dre has with keeping Kyra safe from her obsessive brother was nice.

I&#039;ve been following this series since the beginning and I can&#039;t stop reading and want more... Dre and Kyra&#039;s story is about a chance meeting that leads to a great love story. Kyra is a nice girl however, despite looking very cheerful and happy, she has a lot of insecurities that make her not believe in herself. Dre is a nomad who&#039;s tired of the road and wants to find a placce to call home. The first place he thinks about it&#039;s he&#039;s brother&#039;s clubhouse and on the way their he meets kyra. Theirs story isn&#039;t fast, they think things throuth about their attraction and when they can&#039;t take any longer they act. It&#039;s a happy and fun ending, an easy read with not much tragedy as other books os this series. This book brings new characters and I can&#039;t wait to find out where their stories go. I received a free copy of this book via Evernight and am voluntarily leaving a review.

Kyra had a bad childhood growing up. Her mom was a vile woman. She had married multiple times and one of the marriages she met Dirk, her stepbrother. He would not leave her alone a while ago and the cops kicked him out of town. Guess what he is back and now Kyra is in danger. Dre had saved Kyra and wanted to claim her but wasn&#039;t sure he would be around long enough. Circumstances change and it&#039;s Kyra who needs to be protected but she needs to be loved just as much. Dre is there to protect her in every way possible, but what happens when she doesn&#039;t tell him something that could get her hurt? I received a free copy of this book via Evernight and am voluntarily leaving a review.