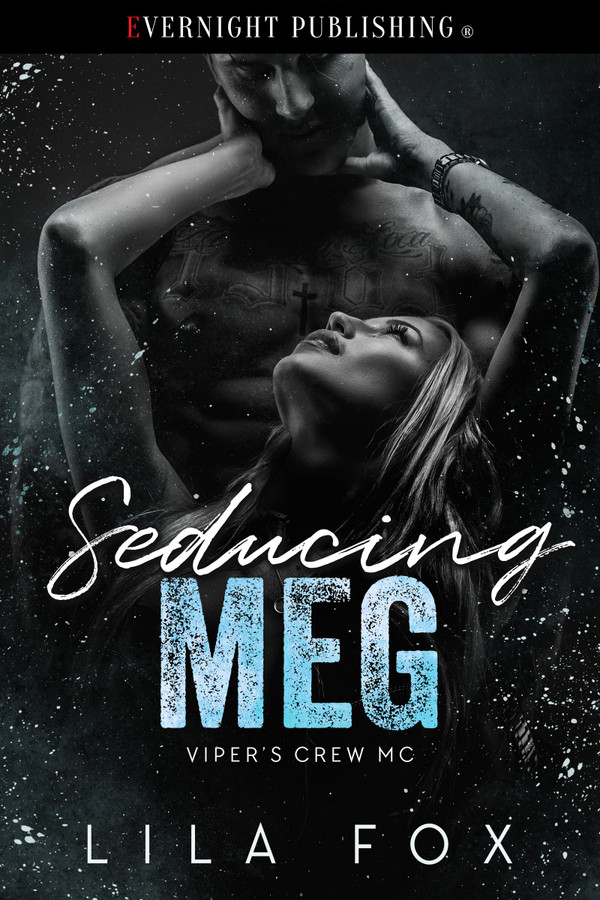 Meg is on the run from one crazy man and falls into the arms of another. Although she wants the bad boy biker, she doesn’t make it easy on him because he’s an asshole—but absolutely perfect for her.

Feral never thought he’d find a woman he’d want to keep—until he comes across Meg. She's the feistiest little thing he’s ever seen and damned if she doesn't try to get the upper hand on him. He can't believe how patient he is with her as she comes to grips with her new life. She has a lot to learn about the club, and he has a lot to learn about relationships—something he has to do quickly or lose her forever.

He worked his way down to her breasts. She gasped and arched off the mattress when he drew one of her nipples into his mouth. He tongued, sucked, and manipulated it until it was swollen, bright red, and burning.

He pressed a kiss to her chest. “Soon, angel. Let me play a bit first.”

Meg tried to yank her arms from his grasp, but he held tight. She couldn’t believe how easily he was holding her. She’d never been with a guy this strong, masculine, and domineering before in her life, and she knew she’d come to crave it and him very easily.

Feral used his shoulders to separate her thighs more to make room for him. His fingers separated her cunt lips, and he blew on her tight, swollen clit.

“Ahhh,” she screamed and tried to arch, but he had her body pressed down.

“Oh, sweet, Lord.” She moaned when he started using his tongue and mouth on her clit.

“Let me work a finger into you. You’re so fucking tight I might have to work at getting my cock inside of you the first time.”

She screamed when his hand came down, and he lightly smacked her clit.

Her jaw started aching with how tightly and how long she held herself stiffly. She tried to keep her mouth shut and take everything he gave her. She hated and loved how he took her to the edge but would always pull her back from coming. It was torture and ecstasy at the same time.

It felt like forever when he finally moved up her body.

A moan slipped from her when he started kissing her, making her taste herself. It should have grossed her out, but instead, it just made her hotter.

“Are you on birth control?” he asked.

“Babe, I’m clean. I swear it. I haven’t been with a woman for a long time, and I’ve gotten tested in the last month. What about you?”

“Good. Can I fuck you naked like I’m craving to?”

She’d never heard it said like that before but knew what he meant. “Yes.”

He released her arms.

“Hold me while I work my cock into you. I’ll take it easy on you, but I’m not going to stop. You can take me. It just might take some time.”

Her grip on his shoulders tightened when she felt the pressure of his cock head push into her.

She stopped him a few times when the discomfort turned to pain, but he was always patient and waited for her. “Jesus, you’re so fucking tight, but we’re just about there.”

She screamed when he rammed the last few inches inside of her.

“Jesus, how fucking big are you?”

He chuckled. “A little over nine inches.”

No wonder she felt stretched.

He started thrusting inside of her. Each stroke came harder and faster until he was pounding into her.

Her nails dug into his hips, and she shook her head. “I can’t. It’s too much.”

“The fuck it is. I’m not stopping until you come. I’ll fuck you raw, babe. Do you want to walk around aching between your legs all day?”

She shook her head frantically. She didn’t understand most of what he said, but she heard the undertones of threat through the pounding sound of her heart.

He slid his hand underneath her. She felt his finger rubbing the skin by her cunt and then a burning sensation when he speared his finger into her ass. Amazingly, it threw her right over. She screamed and shook with the climax.

Never had she thought she’d like to have something in her ass, but he proved her wrong.

She ran her hands over his back as he braced himself over her, trying to catch his breath.

“Jesus, woman. I think you killed me.”

She laughed and then groaned when she felt her ass tighten around the finger he still had in her ass.

He chuckled. “We’re going to have so much fun.” He wiggled the finger.

Loved how the story&#039;s are all connected with each other. Can&#039;t wait wait for next book to see if they finally get rock