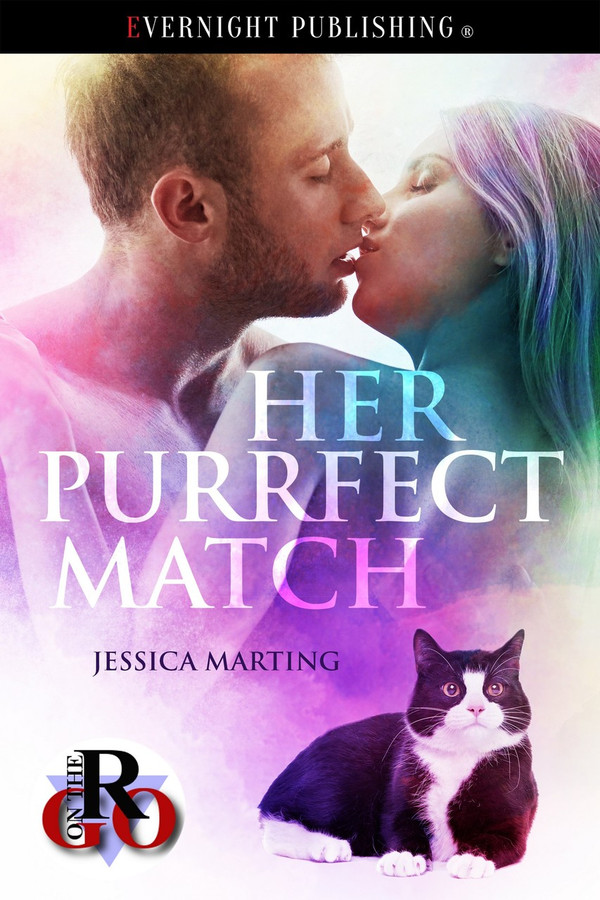 All Grace wanted to do was give a shelter cat a much-needed home, and when Mittens extends a paw to her through the bars of his cage, she thinks she’s found the perfect pet.

Under the light of a full moon, Mittens transforms into Emric, a sexy sorcerer who was turned into a cat by an angry ex-girlfriend. Enraged that Emric wouldn’t give her an old grimoire that’s been in his family for generations, she’s still out there, looking for him and the spellbook.

Emric and Grace are drawn to each other with a magnetic force that surprises both of them. But before they can act on that attraction, they have to track down and destroy the grimoire before Emric’s ex can get her hands on it and unleash hell.

If Emric’s recollection of shape-shifting spells was correct, the obnoxiously bright full moon should break his curse any minute now, provided he could get in its glow. He was pretty sure that was how it worked, although he’d never had any occasion to turn anyone into a cat. Or toad, he thought, remembering how angry Maisy had been at her mistake. It would have been much easier for her to keep a toad in her possession than a wily cat.

He needed to get in the moonlight to reverse the spell, and the small cushioned window seat in Grace’s bedroom provided the perfect place to do it. The vertical blinds in the living room would make too much noise when he tried to duck behind them, and he wanted to shift back to human form and get back to his house, provided his crazy ex hadn’t burned it down, without Grace waking up. He really needed to get back to his old life, preferably before she had him neutered.

A shudder rippled through his feline body at the notion. He’d fought the animal shelter’s volunteers and veterinarians as much as he could in an attempt to stave off the surgery. He wasn’t sure how much of that could be reversed once he was human again.

Emric tried to nudge away the curtains with his nose, then extended his front paws to grab on to the cushion and haul himself up. He miscalculated, though, and his paws brought down the entire curtain rod with a crash.

Maybe Grace was a light sleeper. He prayed for that as the moonlight hit his furry face, and with no small amount of relief welcomed the sensation of his bones and muscles pulling apart and knitting themselves back together.

Not a light sleeper. Shit.

Emric remained crouched on the carpeted floor and looked up to see Grace sitting up in bed, shocked. He desperately hoped she didn’t have a gun anywhere nearby. He didn’t trust his mouth to form words just yet and say a spell that would deflect any bullets.

Grace tossed the covers off her and nearly leaped out of bed. She flipped on the bedroom light, revealing baggy men’s pajamas that hid the nice shape he knew she had. “Mittens?” she said, her voice a breathless whisper.

Emric tried to clear his throat, a meow almost rising from him almost on instinct. “No,” he said, his throat sore and his voice a croak. “Not Mittens.” He tried again. “Please don’t neuter me.”

Emric couldn’t believe it when he’s turned into a house cat by an utterly crazy ex-girlfriend. All Grace wanted was an older cat from the pound who needed some love, care and a good home. When she took Emric home with her she had no idea what she was getting herself in for. I found this to be a fun and lighthearted, almost tongue-in-cheek style of story. This is seriously one of those “disconnect your brain, sit back and enjoy the ride” books where I’ve found you need to leave a large chunk of logic and rational thought behind and just relish the story for what it is. Nevermind that no cat I’ve ever adopted from the pound has turned into a sexy sorcerer. Ignore the fact that some handsome stranger (who has sweet-talked himself into your home) has some utterly nutso story about being a cursed sorcerer with a crazy psycho witch ex-girlfriend or some family heirloom grimoire that you’re protecting from evil forces – just laugh, smile and roll with it. I really did like Grace’s character – apart from the fact she opened her home, life and heart to a near-stranger with a really bizarre story, I found her mostly to be a modern and relatable character. Emric is also a typical handsome hero with a few problems and a strong libido. With the addition of a funny and interesting (albeit slightly nutty) plotline this is sure to be a happy and amusing caper-style of story that I feel should appeal to a lot of people. While the chemistry certainly sizzles between Grace and Emric from the moment he changes back to human form (naked in a tangle of curtains on Grace’s bedroom floor) the chemistry doesn’t become anything very physical until near the very end of the story. While part of me was pleased that the characterization and plot held center stage for most of the story it made this feel more of a spicy romance rather than an erotic one to me. Readers looking for something heavily erotic or with a bunch of explicit sex might not find this short story satisfying, but those more interested in a good – and funny – plotline and deeper characters should find this spicy romance covers a lot of what they’re after. I really enjoyed it and would happily read more by this author.

Cute read. Grace is the ultimate go with the flow person,,,cat turns into a man, ok. Man is a witch ok.