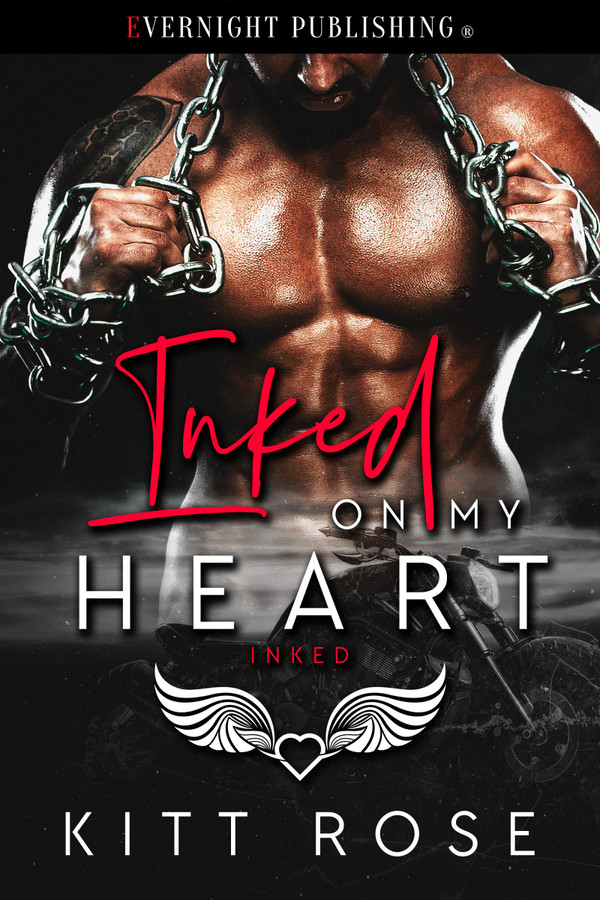 Love can be permanent. Or only skin deep...

Accidentally running into her life-long crush in the men’s room was embarrassing enough, but Joey just couldn't keep her big mouth shut.

Joey buried her mother and ended her engagement in the same month. Hooking up with Ty might be a horrible idea, but Joey can’t seem to stay away.

The tattoos Ty creates are permanent, his relationships aren’t. His little sister’s shy best friend is all grown up and gorgeous. He can’t help but chase her.

Joey bears the marks of her past and Ty’s afraid to become his philandering father. Both will have to let go of their fears and take a chance if they have any hope of a future together.

Ty sat on a stool at the drawing table in his boxers talking on his cell.

I slipped my arms around him and kissed his shoulder.

Turning on his stool, he faced me and nuzzled my neck, his hand traveling up the back of my thigh, over my hip, and up to my breast to play with my nipple. A low moan slipped out of my throat. With a mischievous smile, he put a finger to his mouth in a silent “shh.”

Two could play at this game. I put my hands on his knees and slid them up the inside of his thighs, brushing his balls. He narrowed his eyes at me and massaged my breast.

“No, Nick. That won’t work. We both know you’re asking for entirely too much money for the space. It’s not long term, you know that. We’re growing and, in a few years, will need something bigger, hopefully with parking. Not to mention, I’m not interested in being a landlord.” He frowned and moved the phone to his other ear.

My hand brushed his cock and he inhaled sharply. To return the favor, his hand drifted down, under the t-shirt to my clit and he brushed it with the lightest touch. I one-upped him, reaching my hand into his boxers to release his growing erection, fondling him.

I looked in his eyes and asked, “Important call?”

He shook his head no, lust branded in his eyes. I dropped to my knees between his legs and took him in my mouth in one swift motion. He groaned softly, his eyes locked on me as I brought him to the back of my throat, swirling my tongue around him. His breathing got rougher as I went and I cupped his balls, squeezing while I increased the suction of my mouth on him.

His voice was hoarse when he said, “Nick, the answer’s no. Figure something else out. I really need to go, something’s come up.” And without waiting for a response, he disconnected and tossed his phone onto the table, his hands going into my hair as his jaw clenched.

I slipped a hand between my legs and rubbed my clit, aware that his eyes followed my movement.

His hands tightened in my hair, his hips pumping unconsciously. A low moan started in the back of his throat and I sped up, working him faster.

I shifted my body to let him see me slip one finger inside, matching the rhythm to the motions of my mouth on him. I pulled off and licked up his shaft. I met his eyes. “I swallow, in case you were wondering.” Then I took him deep while he groaned.

His hips worked faster and I added my hand, pumping and sucking and licking. His grip became painfully tight and he came. I swallowed it quick, licking and caressing him until his shuddering stopped.

I sat back on my heels, resting my forehead on his knee and smiled up at him. Maybe I was weird, but I really loved making a guy lose control. And seeing Ty lose control… It was fucking hot.

When his breathing slowed, he chuckled. “I’m having a surreal moment. I had an image pop into my head of you in Care Bear pajamas at one of my sister’s sleepover birthday parties. And that girl just gave me unbelievable head while touching herself.” He snorted a laugh. “And telling me she swallows.” With that, he lost it, laughing uncontrollably.

I grinned, stood, and shrugged. “First off, they were Strawberry Shortcake PJ’s. And second, what can I say? I don’t sleep around, but I like sex. I like trying new things. I love touching you, with my hands and my mouth. And I loved making you come.”

His laughter cut off abruptly and he pulled me to him. “I will never ever complain about any of that. Damn, you…” He pushed my shirt up, sliding his hand down my abdomen, stopping short of where I needed him to touch me. “Keep getting better.”

He hooked his arms around my waist and picked me up, carrying me to the bedroom. I wrapped my legs around him reflexively and he groaned. “You are so fucking wet.”

“Uh, yeah. That turned me on. You turn me on. Hell, I don’t think I have an off switch around you.”

He laughed as he tossed me on the bed. Crawling up between my legs, he put my legs on his shoulders and returned the favor. Making me lose control, shudder and moan.

This emotional roller-coaster love story between Joey and Ty, the hottie who was her high school crush, has everything, including one of the funniest wedding toasts ever. Kitt balances the humorous and the heart-wrenching, and her characters are as lively and colorful as their tattoos!

Sparks of Blue by Rose Wulf

Inked in the Music by Kitt Rose