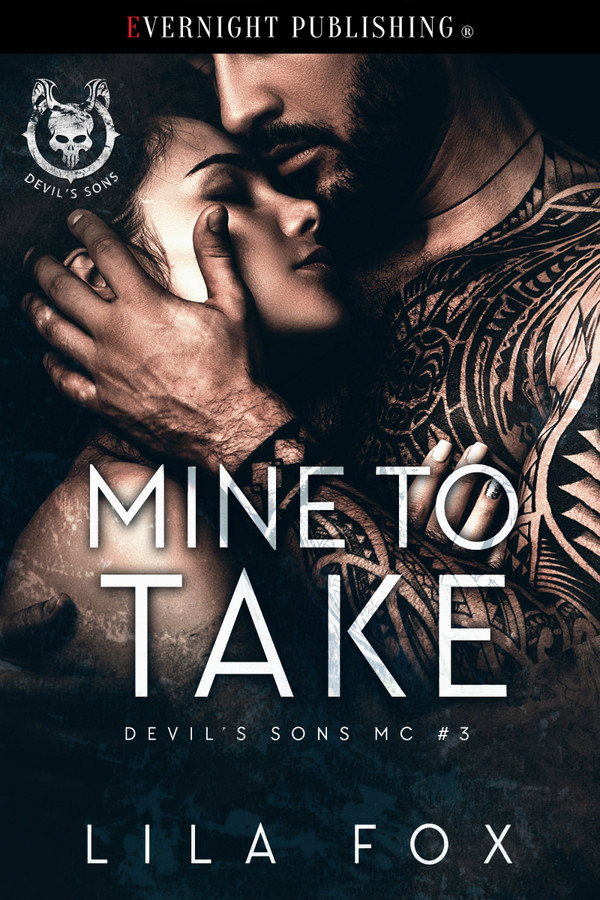 Zoe's life is pretty dull. She works at the town library and lives in a small, peaceful neighborhood. Her only problem is a man who can't take no for an answer.

Savage has always been a solitary man and likes it that way—until he comes upon a woman being attacked. He steps in and messes the guys up. His first look into Zoe's beautiful eyes ignite emotions he never knew existed. But it's her courage that makes him want to claim her as his own.

Zoe puts herself on the line for him and the club. Savage's never had a relationship in his life, but he's damn well keeping this one.

Damn, the man was already driving her crazy, and they’d just started. He’d made her hotter in thirty seconds than the other men she’d been to bed with had in thirty minutes or more.

When his clothes had come off, saliva had pooled in her mouth. He had muscles on top of muscles and colorful tattoos covering his torso and arms.

She wanted to take the time to trace and study them but knew it would have to wait until another time because they were already close to the edge.

She hadn’t felt him unbutton her shirt until the air in the room hit her bare skin. The front catch of her bra unhooked, releasing her breasts. She tried to cover herself with her arm, but he just pressed it above her head.

“Savage, turn off the lights.”

“Fuck no. I want to see and taste every inch of you, woman. And you’re going to let me.”

“Not this first time. Please.”

He sat up enough to see her face and braced himself on his elbow. “Listen up. I have to warn you, I’m going to want to dominate your life. Outside of this room, you get a say. But when those doors close, your ass is mine. Although there’s nothing I’d ever do to hurt you, I need to have total control. Are you going to be able to handle that?”

She stared into his eyes for a moment and then nodded. For some reason, she trusted him with her body, emotions, and safety, but she was going to willingly hand over all control to him. It didn’t bother her as much as she thought it would.

“Good. Now, keep your arms over your head.”

She raised both arms and waited. A gasp tore from her mouth when Savage latched onto one of her nipples and sucked firmly, making her arch off the mattress.

“I know what you need, but I’ve never had to be gentle before, and I want to do that with you. I want to give you so much pleasure you can’t stand it but beg for more.”

And he did just that. There wasn’t a part of her torso or neck he didn’t taste or suck on. When he finally got her jeans and panties off, she was wild with desire.

She unintentionally reached for him.

“If you don’t keep your hands up there, I’ll tie them.”

She stiffened for a moment and then relaxed.

He spread her legs apart and cupped her cunt. “This is mine.”

She stared at him.

The feel of one of his fingers thrusting up into her cunt made her scream at the shock and the stretch, and then she lay there unmoving. God, that was just his finger? How in the hell was she going to fit his cock? She’d seen the outline of it under his boxers, and anxiety took hold.

“Fuck, your cunt is tight. I can’t wait to stretch this baby out. How many?”

“How many what?” she asked. It was hard to think or have a conversation when so many sensations raged through her.

“How many men have you been with?” he asked.

He nodded in satisfaction. “Good. This cunt will know only me from now on. Say yes.”

He pumped inside of her. By the time he added another finger, she was delirious with passion.

“Fuckin A.” He pulled his fingers out of her, reached for a condom, rolled it on, and then mounted her. “You can hang on to me now, babe. I’ll start gently, but then I’m going to ride you hard. If I’m hurting you at any time, tell me.”

She nodded and wrapped her arms around his neck, then raised her knees.

He pushed into her slow and easy, and every inch of his cock she took kept her on a teeter-totter of being apprehensive about taking more of him but also craving everything he gave her.

Once he finally got every inch into her, they both froze and savored the sensation of being so close.

“I did it,” she said in amazement.

He chuckled. “Yes. Good girl. I knew you could do it. Now, are you ready to ride?”

He pulled out until just the head of his cock was in her, then pushed back in. He did this slowly a few times before he picked up the pace.

Within a few minutes, he was thrusting into her with more and more power, and the band that tightened became excruciating.

“I know, baby. We’re just about there. Just feel how good this is. You were made to be mine.”

He gripped the back of her neck with one hand, and the other went to her hip and started pounding into her pussy.

Swirling colors blinded her before the band in her stomach snapped, and she was thrown over the edge. She vaguely heard her scream mixed with his groan before she collapsed against the mattress and closed her eyes.

She heard the combination of their harsh breathing and felt him hold himself over her while he gained some control.

A groan tore from her throat when he pulled his cock out of her. She knew he had come, but it was still enormous and semi-hard.

She drifted in and out of consciousness and was too tired to object or move when he cleaned her up. He maneuvered her onto her side and then plastered himself against her back as he wrapped an arm around her waist.

Darkness closed in on her so fast she was only able to pat his hand before she was asleep.

Zoe is tired of small town living but does not want to leave her job. When she is attacked by the town bully, a man steps in and with one look, changes her world. Savage spent his life alone and never felt anything was missing, until Zoe. From the first moment he saves her, he knows life as he knew it is over. Zoe knows she has little chance of keeping Savage, but she will do anything to keep him safe. Will Savage see how much he needs Zoe before it is to late, or will he forever be alone? Savage and Zoe are two characters crafted to fit like a lock and key. I enjoyed the other characters and enticed to go look for the other books in the series. I recommend the writing of Ms. Fox and the members of the Devil’s Sons MC.