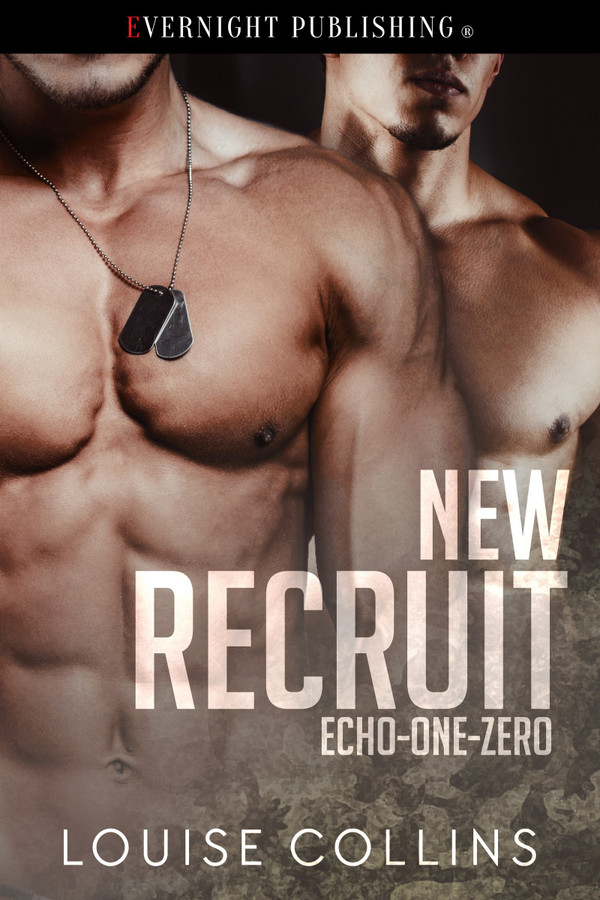 Boredom is slowly killing Medic Rick “Babe” Shepherd. His fellow soldiers are enjoying the quiet new base and the laidback attitude of their commander, but the lack of action is draining Babe’s soul. Excitement comes with the arrival of three special unit soldiers, and one has his eye on Babe. Becket doesn’t shy away from the fact he wants Babe, and Babe can’t deny his attraction to the mystery soldier—if only he had a few minutes spare to indulge in the Becket fantasy.

Becket’s been granted three days leave after a mission from hell, and he finds himself in an army base, in the middle of nowhere. He needs to let off steam and sees the solider he needs to get hot and sweaty with. He wants 1st Platoon’s medic to treat his sexual frustration, but Babe’s in hot demand, and Becket is forced to wait.

When he finally gets him, Becket’s not sure he can ever let him go.

Shepherd reached across the bed to grab a towel, flashing Becket a glimpse of his hip. It was the perfect handle for Becket to grip if Shepherd were to climb onto his lap. Becket shook the thought away and willed his mind to stay focused. After his head was sorted, then he could seduce the young soldier.

Shepherd cupped the back of Becket’s neck and angled his head forward.

“Hold the towel over your face, I’m gonna flush it the wound with saline.”

Becket gritted his teeth at the sting, and the saline rushed forward, soaking the towel.

“You sure you’re a doctor? I’m feeling worse than when I came in here.”

Shepherd snorted, then tugged the towel from Becket’s grip. “I meant it’s nice and neat. I won’t need to stitch it.”

He tossed the towel on the bed, and Becket looked at the pink streaks staining the material.

The glue only needed a few minutes to set. Shepherd pinched the wound closed as he waited.

“You should try to keep it dry…”

“No can do, I’m in need of a shower, unless you’re offering to sponge-bathe me?”

Shepherd pressed the small strips on the wound, and it was only when the last one was pressed across the cut that the pain flared.

Becket hissed, and his hands shot up, gripping the back of Shepherd’s thighs. It had been completely unintentional, but the gasp it earned him had his cock throbbing to life. He gazed up at Shepherd, and a surge of pride throbbed in his chest when Shepherd’s lashes fluttered and his lips parted.

Doctor Shepherd had vacated the building, and flustered Shepherd had returned. Becket didn’t remove his hands from Shepherd’s legs. He grinned up at him when he saw pink building in his cheeks, and darkness swirling in his eyes.

“What are you doing?” Shepherd asked.

Becket crept his hands higher, sliding up the back of Shepherd’s thighs until he found the curve of his ass. He kept touching until his palms were pushing against the perfect globes. Becket bit his lip to keep his groan at bay.

The baggy combats didn’t do Shepherd’s rear justice. He felt perfect in Becket’s hands, and his aroused thoughts rearranged themselves. He wanted one hand on Shepherd’s perfect ass, and one hand on his hip while he thrusted up into Shepherd’s eager body.

Shepherd’s hands found Becket’s shoulders, and he held on. “Why?”

“I could get to know you, in very intimate ways.”

Shepherd shook his head, but his body betrayed him. His eyes slid shut, and he lifted his chin, stretching out his neck in a gesture that said I’m yours, come get me.

Becket pulled Shepherd towards him, and he stumbled slightly, until his flat stomach pressed into Becket’s face. He inhaled the scent. Sweeter than sweat, it made his mouth water, and he growled before closing his teeth around a wrinkle in Shepherd’s t-shirt.

Shepherd yanked himself back, and Becket glanced up in confusion. A soldier had walked into the room, belt undone, and fingers eagerly picking at his top button. He looked down at his crotch, unaware Becket was sitting there.

When he finally looked up, he squawked and threw himself backwards.

Shepherd scratched the back of his head, seemingly at a loss of what to do. He pointed at Becket, then to the door. “Becket was just leaving.”

Becket didn’t bother trying to cover up his erection. He stood up, and the soldier that had interrupted them gawped at his package, then looked over to Shepherd.

“What you talking about? You stopped the throbbing in my swollen head.”

“Yeah, my other head is still throbbing and swollen, begging you for help, but you’re turning me away.”

Becket chuckled and strolled across the room. He shot Shepherd a parting smile, then fled through the door. Only when he was far enough away, did he stop and sag in disappointment. Of course Shepherd had someone at the base. He was cute, and it would’ve been a waste of his perfect ass if he wasn’t being regularly groped and manhandled, but Becket wished it could’ve been him.

There had definitely been desire emitting from Shepherd in waves, Becket knew he could exploit the lust and seduce him, but he didn’t want to leave heartbreak and destruction after he left. If soldiers could find happiness in the dust plains of death, he wasn’t going to mess it up no matter how hard his cock ached, or his pride shriveled.

Shepherd was not his to take.

Books by this author are an automatic buy for me and this one was money well spent again. The MCs had rooting value, the setting was perfect for action and drama with the humor I require to balance my angst needs. I also enjoyed the miscommunication/misunderstanding trope employed here--well done! I&#039;m eager to see what happens next with this cast of characters.

Rick would never have believed he’d be bored in Afghanistan. The medic on his team, he prefers to be kept busy and patching up his guys – doing what he’s always loved. When three Special forces guys are sent to their base after a mission goes sideways Rick is surprised when one of them – Becket – seriously turns him on. The two men have enough chemistry to set the place on fire, but can they find their way together? I really enjoyed this short story. I felt the author did a really good job blending the story so it looked like Rick was doing one thing when actually something completely different was occurring. While the reader should certainly be able to sift out the truth from the impressions fleeting glances and quick looks gives the three new soldiers I found it added an interesting (and for me personally, very different!) element to the story. Usually mis-communications irritate me and I often find them to be illogical, but in this story I found then funny and almost slightly slap-stick the way Becket in particular kept on misinterpreting the situation around Rick and his role in their team. This added a level of humour to the story which isn’t common and I enjoyed it. A part of me wondered if the misconceptions would hamper Rick and Becket being able to trust each other enough to start anything other than a Happy For Now style of relationship, but I was again pleased when Rick discovered what Becket truly thought fairly promptly and they could both deal with the fall out. Sexy and fun, I found that this was a different style of soldier-based story. The sex was steamy hot and well written, the connection between Rick and Becket real enough I found it believable. While I’m not sure the plot of mis-communication will be every readers cup of tea, I personally enjoyed it and will definitely be keeping an eye out for other stories written by this author. There were a number of strong secondary characters who were given enough time and story that I am hoping they will be featured in subsequent stories. Sexy and fast paced, this was a good story and one I can recommend.

Whoop, that was an awesome read!! Military Medic Rick (Babe) Shepherd yearns for action, on a mission without blood running, open wounds or stitching is no fun. Now all he does is looking after blisters and superficial wounds. Boring yes, until three special unit soldiers arrive and the most stunning one can’t take his hungry smoldering eyes of Shepherd. Becket is in need of some steamy action between the sheets and Babe is the one he wants. It seems it’s mutual so for the next three days, he can enrapture this man. Well, if he can get his hands on him, that seems to be the problem. All the men seem to be in need of Babe. Becket is confused about it and doesn’t want to be in line. Becket is impatience and when they are finally at it, it’s more than he ever hoped for until he spills his stupid mouth. Oh boy, I loved this story. The environments were absolutely wonderful. I could picture it all clearly before my eyes. All the witty humor, I laughed and grinned and found it absolutely adorable. The seriousness of the job was well put down. The ranking perceptible where required, which I loved btw. The sexual tension was palpable. The confusion was delightful, the buildup around it was entertaining af!! All the men were fun, but Babe and Becket were more than delicious and hot as hell. The action was seriously thrilling and made it realistic, a short reality check to realize again what the scenery was all about. Well done! A story which is smoothly and passionately written, a delight for one&#039;s mind. For me another winner in the line from this author!

The Rat by Louise Collins