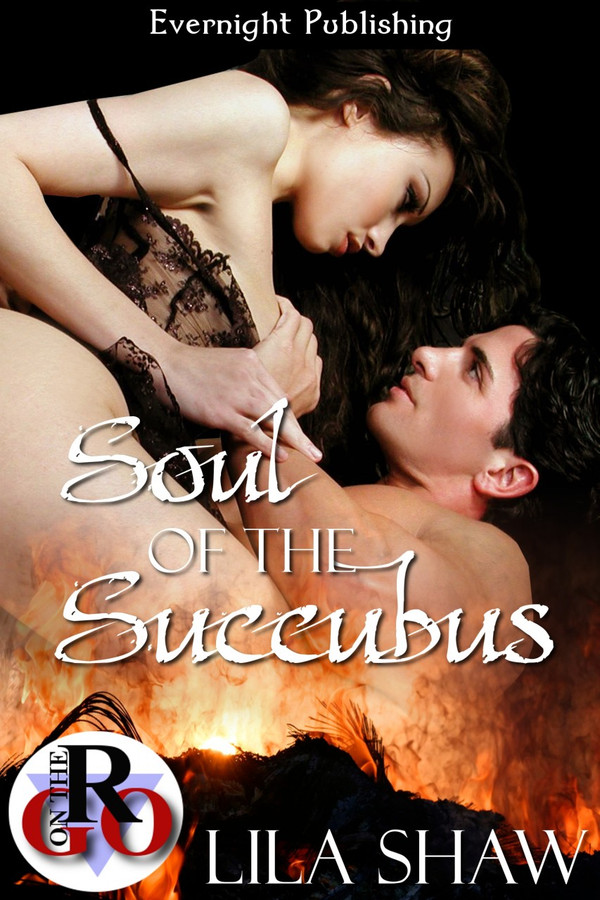 After nearly four millennia, Yve, a succubus and harvester of souls, has finally met her quota. She must travel to hell to redeem her own from the devil who holds it in hock. Ta’avah, the hunky and charming minion responsible for luring Yve into sexual slavery, joins her for her redemption ceremony before an audience of ogling demons. The pair soon learn that deals with the devil are rarely settled to anyone’s satisfaction other than Lucifer’s. Only one weapon can trump those of the master of deception, but do Yve or Ta have enough humanity left in them to find and wield it?

“Get dressed while I hold them off,” Ta mutters, barely moving his lips. He buttons and zips up, staring down the bolder demons that move a mite too close. The monster-type aren’t clever but they’re persistent and deadly when the spirit moves. Their kind also tends to follow a pack mentality―when one attacks, they all attack.

I tug my own clothes on with supersonic speed, ditching the underwear. Before I slip on my boots, I remove the two church-blessed daggers I have concealed in the shank of each boot. I never visit Hell unarmed.

When I spin around, Ta holds an ax in one hand and a knife in the other. He’s also slipped on a shirt he either hid or stole. He takes in my status and nods. “You retain the title of smartest succubus I ever created.”

“If we can make it to the door of the palace, I can seal it from the outside. That’ll give us a small head start, hopefully enough to get us to the portal.”

“Why are you helping me instead of them?” I wave my dagger at a lecherous satyr who takes a swipe at me but only snags my hair.

“Because, my sweet Yve, you are not the only one who has fulfilled a contract.” Ta delivers a roundhouse kick to a second satyr who tries to sneak up on him. With a loud screech, it falls to the floor and is set upon by two dragon-like demons that rip it in half.

“What? You’re a conscript? You were human once?” All this time, I’d thought Ta a minion. I’d no idea, he’d bargained his way into the job of chief succubus-maker.

“A conscript bound to deliver a billion souls for my freedom through the succubi I made. Your millionth was my billionth plus one for extra security. I chose you well, Yve. You were my first, my favorite.” His smile is boyish with a hint of pride. The heart I thought frozen solid thousands of years ago thaws enough to release a slow drip of water.

I bolt for the door. Two drooling, fanged demons covered in thick pelts of black dreadlocks try to block my path. A stab in the gut transforms them into shrieking balls of fur and teeth. Four demons pounce and finish them off. The rest pursue. Ta spins to take out one of the speed demons.

“Keep going, I’ll be right behind you!” he yells.

I do, taking out three foul-smelling trolls who charge as I enter the front lobby. My flight skids to halt, however, when the front door refuses to open.

“Go!” Ta shouts as he finishes off a large attacker with the head of a komodo dragon and the body of an orangutan. I hear its death howls and Ta’s approaching footfall.

“It won’t open!” I shriek tugging on the door handle.

“What? Okay.” I do as Ta says and when I finish, he’s standing next to me flipping a series of latches I’d not noticed. The door swings free.

He chuckles and motions me through, slamming the door behind us. From his pocket, he produces a padlock he uses to secure an external latch. “Owa’a Teygu’u Siyam!” He claps his hands three times then clicks the lock shut. When he says the words, they sound suspiciously like ‘Oh what a goose I am.’ Damn him. I’m such an idiot.

“There was no magic ward on the door, was there?” I cross my arms in front of my chest, the points of my two daggers pointed to the sky.

“Nope. But you sure were cute spinning around, confessing your mental slowness.” A peal of laughter erupts and has to run its course before he takes my hand and says, “Come on, Miss Fois Gras. Let’s get out of here before Lou sics any more nasties on us.”

Yve is weary of the mindless sex that accompanies her job as a succubus. She is ready to finish her contract and move on with getting old and getting rest. Ta is her maker, the creature who turned her into a succubus all those years ago when she was a mere mortal human, and she has mixed feelings about him. Is he as evil as the rest of the beings in Hades, or is he a victim much the same as she? Lila Shaw’s Soul of the Succubus is a short but intense story with interesting characters and an unusual setting. I do hope that there is a happily ever after for these poor characters since they went through so much to get free.

Yve has done it. One million souls. She is done. Yve is worried though. When dealing with demons, you never know what can turn up. Of course the demon lord or devil wants her one last time. Yve has worked as a succubus, taking souls for thousands of years. Now she is done, free. Ta, a demon who creates succubi for the demon in charge. Ta&#039;s quota is up as well. After the demon in charge gets what he wants from Yve, Ta and Yve start to leave the hell they are in. But will the demon really let them go without a fight or turning the tables on the two? With freedom on the line, they will stop at nothing to get out of the hell they have lived in. This is a short erotic paranormal story. Nothing too deep or thought provoking. Just a good read. The sex scenes are great. I really liked the story between Ta and Yve. Ta seems to be out for himself but he truly shows affection for Yve. Yve just wants to live a normal life, maybe have a family, grow old with someone, just a normal life. After thousands of years of meaningless sex she is ready to just be a normal girl. The story itself is action packed and even has a few twists and turns.Awesome short story. Would love to read more of Lila&#039;s Succubi tales! http://juliesbookreview.blogspot.com/2012/09/lila-shaw-review-3.html

Vixen and the Pea by Lila Shaw