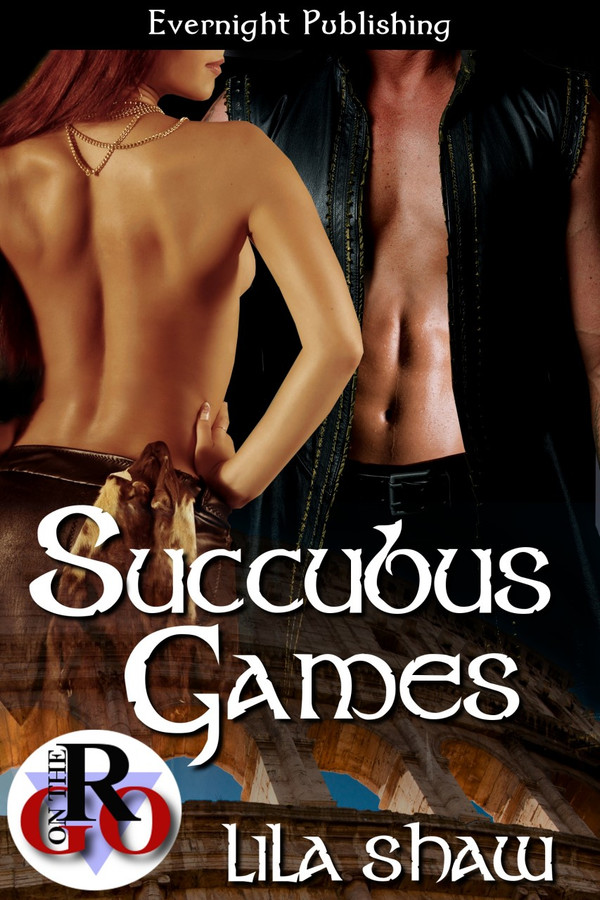 The Succubus Chronicles
Willow has had centuries in Sisyphus Prison to reinforce the hard-learned lesson that the jealous and capricious Greek gods are not to be trifled with. There are only two ways out, and both require Willow to compete in the annual gladiator match. The winner is freed while the loser marches straight to Tartarus to become one of Hades’ concubines. Willow plans to press all her succubus charms into service to gain the upper hand against her opponent…until she discovers who he is.

Helveticus is a demi-god with a devilish plan of his own to win his freedom, a plan that begins with the seduction of his lush adversary. He is the last person Willow wishes to battle because she’s not sure whether she wants to kill him or kiss him. Only one can be crowned the victor. Who will win the war of body over heart?
Be Warned: public exhibition.

Excerpt:
Before my knuckles can strike Helveticus's door, it swings open. We stare at each other, me waiting for him to invite me in, he for ... no idea. Maybe he's afraid of Tyche screwing him over if she finds out he's dallying with me. I wonder if he knows I'm a succubus.
"So you're a succubus, I hear?" he says.
Guess that mystery is shot.
He takes my hand and tugs me forward. His other hand slides into the small of my back, and a finger settles into the cleft of my ass.
Warmth from his palm pools briefly against my skin before winging through my body. Heat shoots to the tips of my fingers and toes before rebounding to ignite the space between my legs. Nice.
I glance about the room he's invited me into. The ceiling looms high above us and is adorned with various erotic scenes—orgies, autoeroticism, men with women, women with women, men with men. Beneath my feet is an intricate mosaic tile depicting Zeus raping some poor mortal woman. Disgusting what passes for art these days.
"So, are you?" he asks.
"Am I what?”
The edges of his lips lift slightly. “A succubus?”
“Why does it matter?" I breeze past him, away from Zeus toward a vignette of Athena waging one of her many battles. Girl power. I'd rather look at her.
"It makes a difference in how we spend the next three and a half hours, considering we'll be battling each other right after."
I blow out a puff of contemptuous air. "Worried you can’t handle me?"
He bursts out laughing. "Oh, sweetheart. Have you got it all wrong."
"Do I? What makes you think so?" I slip off my outer robe.
Helveticus's eyes darken as they romp over the sheer gauze of my gown. I don't often wear my gossamer frock, mostly because I'm worried my lust-crazed partners will rip it. I typically dial back the pheromones until my designer confection lies safely in a puddle at the foot of a bed.
"You really don't know who I am, do you?" The distance between us shrinks, his sandals barely audible on the tile floor.
I tilt my head to stare at him, and lick my lips seductively. "No, I can't say I do. Care to enlighten me?"
"Mars is my father."
"Oh, you're Italian? That explains the Latin on your walls, I guess."
He moves closer. "Lilith is my mother."
My smile withers. "Lilith?" Lilith is the Goddess of all succubi, the spiritual leader of my kind, if you will. "S-so, what does that make you?"
"Impervious to your abilities." He's toe to toe with me, a feral hunger in his eyes.
Gulp.
Trouble and danger are plotting a gangbang, and I’m the main course. I am not liking how this is going, especially since he's having an effect on me. Parts of me are hardening; parts of me are softening. Blood is flooding my battle stations. If he's Lilith's son—I never knew she had a son—he thrives on sex as much as I do, craves it, takes it. He's not an incubus though. I've met a few of those fellows in my day, and they are a nasty bunch of rapists. No, Helveticus is made of subtler but far more deadly stuff. However, if Mars, the Roman god of war, is his father, all bets on a kinder, gentler Helveticus are off. Time to bluff.
"From where I'm standing, I think you want me as much as I want you. I think you—"
Demanding lips on mine seal my remaining words in my head while two brawny arms trap me in their embrace. His power and presence overwhelm me, my breath stolen to ransom for my submission, which I gladly yield. Lips move over mine, urging them apart so his tongue can tease, then invade my mouth.
We catch our breaths and begin the kiss anew. His agile tongue traces the edges of my teeth before curling in an embrace with my tongue. Tangy sweet flavors of dates and pomegranates tantalize me.
I'm pressed closer, my breasts flattening against the steely hard chest and abdomen. My arms slide up and lock around his neck, and a tiny whimper escapes. He cups my buttocks and pulls my hips to his.
"Perhaps I underestimated your abilities, succubus." A low growl precedes another kiss—long, slow, deep and toe curling. Molten desire sears my flesh, his touch the cause and the cure.
I lose all hope of winning this battle of sexual prowess; his masculine energy is so potent and compelling. My knees weaken, and my mind blanks out all thought other than how long before I can get his cock inside me, and why can't it already be now.

This quick read packs a fabulous punch. The dialogue is witty and the sex is hot. Plus, the Gods are trying to mess things up and that provides some nice action and will leaving you guessing until the end. Favorite thought of Willow&#039;s: Molten desire sears my flesh, his touch the cause and the cure. &lt;--oh yeah. She&#039;s talking about Helveticus. Yum. I really enjoyed this quick read and am looking forward to the next in the series.

Sisyphus Prison, a prison where the gods send people that have made them angry. The gods use this place as punishment but also as their entrainment. Every year they gods gather for the prison games. the gladiator competition has 2 competitors. The winner gets their freedom and the loser gets sent to Tartarus (hell). So everyone in Sisyphus want to get into the competition. Either way win or lose they get out of the prison. So Tyche holds a drawing or lottery. Everyone who wants to be picked gets a number. Willow a succubus, gets a reaally high number. Narce, her friend tells her a secret. Only about the 1st 500 or so numbers get even put into the drawing. So Willow starts to look around for someone she can trade number with. Narce tells her about Hellveticus. His number is under that 500 mark. So under the advice of her friend Narce she approaches the man. He is leery but she can tell he his interested. They agree to change numbers but Helveticus makes a deal to get several hours with her after the lottery. When both their numbers are called, both Willow and Helveticus know they were set up. Willow goes to his home and even though she knows she was set up, she want to hopefully drain some of his energy before the match. She knows she can&#039;t beat any other way. This is a short read. Some drama, and action fill this short story. Most of the action between the sheets. If you are looking for a fun hot read, this one is for you. Lila Shaw&#039;s Succubus books are some of my favorite. very entertaining. Adults only!!

Vixen and the Pea by Lila Shaw

Soul of the Succubus by Lila Shaw