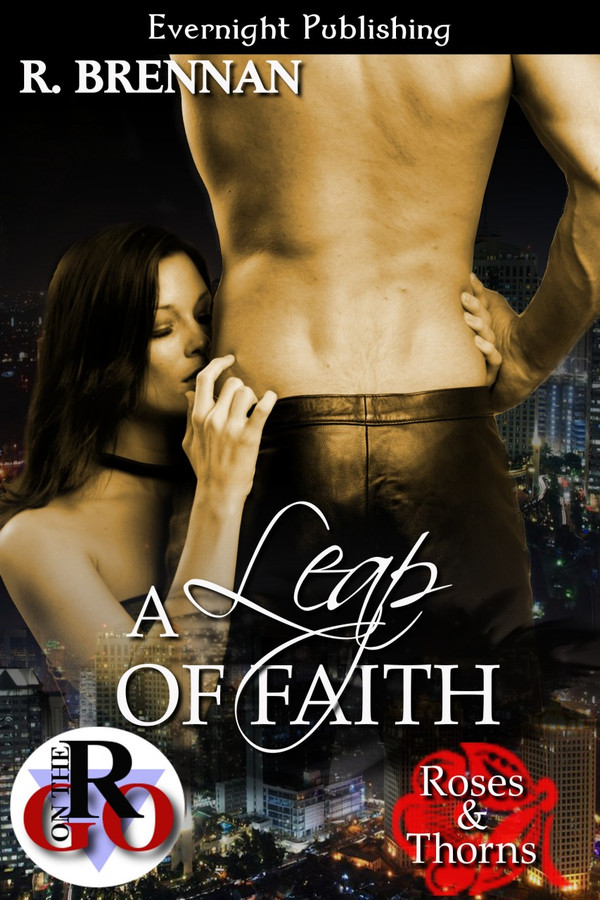 New submissive, Faith Daniels, is completely infatuated with her amazing Dominant, Richard Halstead. So when he sends her a summons via text message a full day before they had plans to meet, she can barely contain her excitement.

But, Richard didn’t just invite her over for a play date. Not this time. He has a proposition for Faith. One that could change the rest of her life.

Strong hands grabbed hold of her kneecaps, startling her. Richard jerked her legs apart until she knelt in an exposed V position. His voice arrived close to her ear, sending a chill through her. “When I ask you to kneel for me, this is how you are to do it. I want you to display your desire. Show your need with the pride of a submissive. Do you understand me, Faith?”

Her body ached for his touch. The brush of his hand, the caress of a breast. Anything. She’d even welcome the slap of his paddle if it meant he’d touch her again. “Yes, Sir.” Her voice was little more than a hoarse whisper.

“That’s my girl.” He slid a finger along her wet opening. Half a breath later, she heard his lips smack together, as if he’d just finished eating barbeque ribs. “Sweet nectar.” His hand returned to probe her slit. A finger entered her.

A gasp of pleasure tore from Faith’s throat, contorting into a whimper when he withdrew from her quivering pussy.

He traced a fingertip over her mouth, coating her lips with the evidence of her arousal.

The carnal scent of her juices surrounded her, pushing Faith toward the mindless black abyss of wanton need. Her nails dug into the flesh of her forearms as she willed herself to resist reaching for him again.

Two fingers forced their way into her mouth. “Taste your desire.”

Faith sucked them clean, her tongue swirling sensually around each offered digit.

Richard abruptly withdrew his hand and moved away.

Solitude rushed in to fill the space he left behind, leaving Faith breathless.

He signaled his return a few pounding heartbeats later with the ‘snap’ of his leash on her collar. “Come, pet,” he commanded.

A LEAP OF FAITH, the second in Brennan&#039;s “Faith” series (the first installment appears in Evernight’s VANILLA-FREE CHRISTMAS), follows our heroine of the same name, a typical girl-next-door living in the big city and getting by with a little help from her friends. One of those friends introduced her to Richard Halstead, a business tycoon with money, money, and a dominant streak as wide as the panoramic windows in his penthouse. She soon gets her first taste of a Dominant/submissive dynamic, and she’s craving more. Here’s where A LEAP OF FAITH picks up — Faith practically dripping with anticipation of her next encounter with His Royal Domliness, Mr. Halstead. With his steady nature and strong guiding hand, Faith eases into her role as a submissive, but lest she become a doormat, Brennan gives her enough quirks and funny flaws to make her completely loveable. (Picture Kristen Wiig in Bridesmaids with a bit more finesse.) This quick read is seamless, steamy and will especially appeal to those into pet play. (Meow!) Brennan is obviously knowledgeable about the lifestyle so it’ll ring true for seasoned veterans, but Faith’s story is completely enjoyable for those who just like to dabble a bit in fantasyland. Link to Review on Goodreads: http://www.goodreads.com/review/show/627166266

I won this book from a blog contest and once I started reading it, I couldn&#039;t stop. It&#039;s my first R. Brennan book but it won&#039;t be my last. So well-written, with engaging characters and a believable plot. No small feat to accomplish in only thirty pages or so. And the sex scenes are SMOKING. Well done!!

A Leap of Faith’ by R. Brennan is not part of a series but the characters in this book, Richard and Faith, have another story together in ‘Vanilla Free Christmas’ an anthology published by Evernight. This is a wonderful story. The chemistry between Richard and Faith is off the charts. The sex scenes were sensual and seductive. I loved that considering the length of the story that was a plot and it was not just one sex scene or several sex scenes. Overall, this was a hot and steamy story. At thirty pages, this book was not long enough. I want to know more about this couple. Hopefully, there are more books about this couple.

Faith is a novice submissive, but when she gets an unexpected text message asking her to meet up with her dominant earlier than planned, she finds more than a hot night ahead of her. Richard Halstead has plans - plans to prove to Faith that she trusts him and that he wants that and much more. In some ways, there is some formulaic aspects to this story - Richard is rich with a penthouse and Faith has trouble believing in her own worth. However, formulas exist because they work! Although this story is more the set-up for a relationship than the pay-off of the story of one, it is a hot read and what looks like the promise of more. I liked how Richard knew when Faith was trying to say less than the whole truth and called her on it later, but I could have used more of an explanation for Melody before Faith considered his offer. For a story with just enough bite to hook and such a brief length, I still enjoyed it and would continue to read about this couple.

Rekindling Their Faith by Sydney Lea