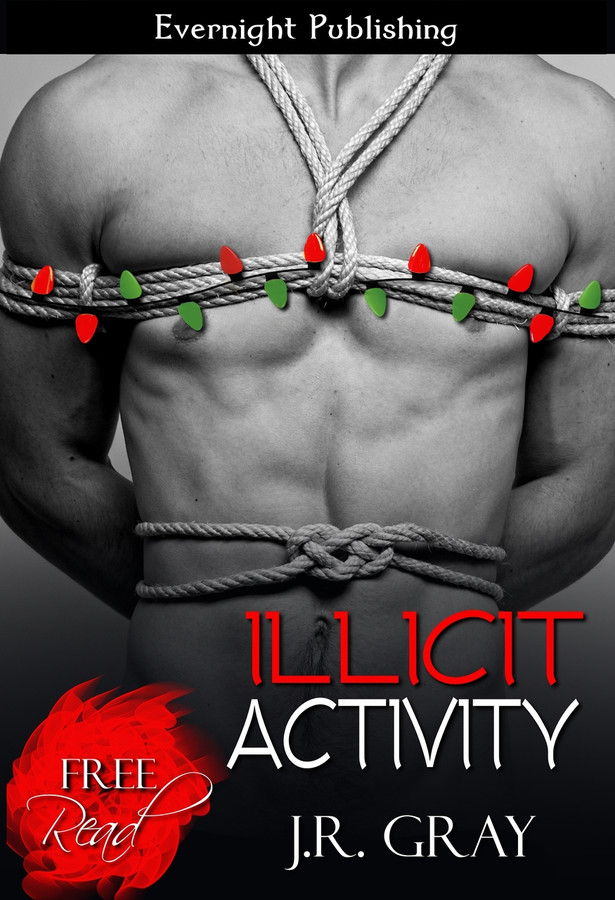 The Christmas season is fast approaching. Jesse and George try to keep their connection alive with stolen late night dinners and secret meetings, which never seem to be enough.

Zac doesn’t take no for an answer, and has set his sights on George’s slave Elliot as his newest conquest. Determined to see Elliot and bring him some holiday spirit, Zac starts a battle of wits with George. But Will George be able to outsmart Zac, and keep him away from Elliot, for long?

The doorbell rang early in the morning. Elliot had finished his chores and was sitting on the floor next to the fire, working on his homework. There was no one else in the penthouse, and he wasn’t expecting anyone. When he wrenched open the heavy, ornate door he found Zac, Jesse’s brother, staring back at him wearing fireman pants and suspenders to hold them up. His body was smeared with charcoal, and he looked oiled. Elliot was entirely confused.

“The exact face I wanted to see.”

“Can I help you, Sir?” Elliot reverted to his training.

“Yes, I have a hose that needs servicing.” Zac grinned wickedly.

Elliot tried not to let the shock show on his face. “I’m sorry, the King is out. Can I take a message?” He shifted and squirmed, getting flustered at the seeming advance from the beautiful redhead.

“I didn’t want it from him.” The bulge in Zac’s pants was noticeable, and Elliot tried not to stare. “And I knew he was gone.”

“How did you know he was gone?”

“I watched his car through the camera I installed above his parking space ‘til it left.” He flattened out his mouth and raised both brows like it was no big deal.

Jesse has gone back to his scheming wife, but he still can’t shake his feelings for George and all they have are stolen moments tinged with sadness and want. Every time Daniel thinks his relationship with Rafael is on stable ground, a new development threatens to ruin their chances at happiness. Zac works hard and parties hard, yet has a soft spot for both Kennedy and Elliot. When Zac decides to truly set his sights on Elliot, it’s not at all as easy as it usually is for him to obtain his conquests as Elliot is George’s slave and George thinks he’s one step ahead of Zac, or is he? Illicit Activity is a free short that follows the timeline of the Bound series. It is not intended to be a standalone as it takes place between the last chapter and the epilogue of book two, Breach of Contract. That epilogue jumped ahead four weeks and this story fills in some of those details while also opening up a whole new storyline. And, this was exactly the book I needed. We see George and Jesse valiantly trying to hold on to some sort of relationship now that Jesse has gone back to his wife and doubt creeps into Daniel’s mind after he hears a comment about Rafael. The focal point here is Zac, Jesse’s brother. Zac who turned out to be a surprisingly interesting character. Zac was introduced in an earlier book in a limited manner. He is busy with missions and computer hacking and numerous bed partners, but what exactly Zac does still remains concealed. He comes off as a complete player, and while part of him is, he shows a soft spot for both Kennedy and Elliot. When he decides to go after Elliot, he gets way more than he thought he was looking for, which makes for an oh so interesting dynamic. Zac still remains a mystery in many ways and the fact that he can’t remember his early childhood years sets him up for a potential explosive storyline all around. The writing in this book completely smoothed out as well and the storylines are set for the next book in the series. The nighttime drama feel remains and Gray manages to keep each and every character and storyline engaging complete with his trademark arousal thrumming through them all. If you’ve read books one and two in the series, well then this is the book you need to read too.

Great short story that shows us what happened just before we reached the epilogue of book 2. Jesse has been dragged home by his extremely manipulative wife and is just about getting by with a few snatched visits to George. For a man that took so long to be true to himself and finally go after what he craved to have it pulled from him as left him desolate. George, the cold hearted man that he is, is thawing and it is breaking his heart not to have Jesse with him. We see a lot of Zac in this story. He was initially helping George discover who was blackmailing him but he has become enamoured with George’s slave Elliot. From dressing up, or dressing down in some cases, his thoughts are taken up with ways to get Elliot to notice him. Although George hasn’t said anything he is more than aware of what is happening and doesn’t appear to be too happy about it. When Elliot needs to hide from his father George thinks he has hidden him well but Zac proves just how good he is at his job when he tracks him down. As I know there are more books to come I look forward to seeing how Zac and Elliot fare as well as continuing the story of how Jesse copes when he goes home with his Dom.

Merry Christmas from the Boys! Yes Illicit is a Christmas Novella which takes place between Jesse and George&#039;s anguish now that Jesse is about to become a father and having Elliot&#039;s past history coming out to the media. You will definitely have to read Legally Bound and Breach of Contract prior to reading Illicit to understand where this Novella picks up besides you really do want to read the other two books first they are hot as hell! Now let&#039;s talk about Zac Jesse&#039;s half brother. In Breach we meet Zac who is hired to help George with the scandal that is plaguing his club with public officials and their so called private lives now in jeopardy of coming forth to the media. Zac is a computer genius and professional hacker who specializes in this type of cleaning and let&#039;s not say he&#039;s doing it to help out his dear old brother...No sorry. Zac has his own agenda. Okay enough of that read Breach to get the story on that. Illicit centers around Zac and Elliot. As you will find out in Breach they meet and Zac is immediately drawn to Elliot, but Elliot wants no part of Zac. Now that&#039;s just peachy because Zac gets whatever and whomever he wants. Funny in Breach Zac got on my dam nerves and in Illicit I actually really started to love him and his determination. Now, George has to protect Elliot from the scandal that has come out and with Elliot&#039;s father the Vice President there is no choice. George has to send Elliot away to be kept safe and away from the media because sweet Elliot doesn&#039;t know which end is up or down. That also means keeping Zac away from Elliot. Brilliant Idea George. Merry Christmas because look out who do you think finds Elliot in his James Bond mission! You got it super sleuth Zac. After Zac&#039;s Christmas surprise to Elliot, the both get to know a little bit more about each other&#039;s past. This is where you will start to fall for Zac and see that there is a sweet and caring side to him. Bring in the Joy cause here it comes! Oh and Happy New Year&#039;s two because we still have the unsolved issue with George and Jesse to look forward to in 2015. J.R. has written a great series with these characters from Daniel and Rafel, to George and Jesse and now Zac and Elliot I can&#039;t wait to see what will happen next. Merry Christmas Guys!

Most people open the doors of an advent calendar during the Christmas period, but this is JR Gray and the guys... you can see where I&#039;m going with this. Your heart will sigh, your toes will tingle, your lips will curl into a smile and you will need a tissue for the tears, tears of laughter. I don&#039;t want to spoil this gift, so I&#039;m going to leave it at that. JR Gray says it all in the pages of Illicit Activity. It&#039;s free, it&#039;s brilliant and you will never recover from Zac!