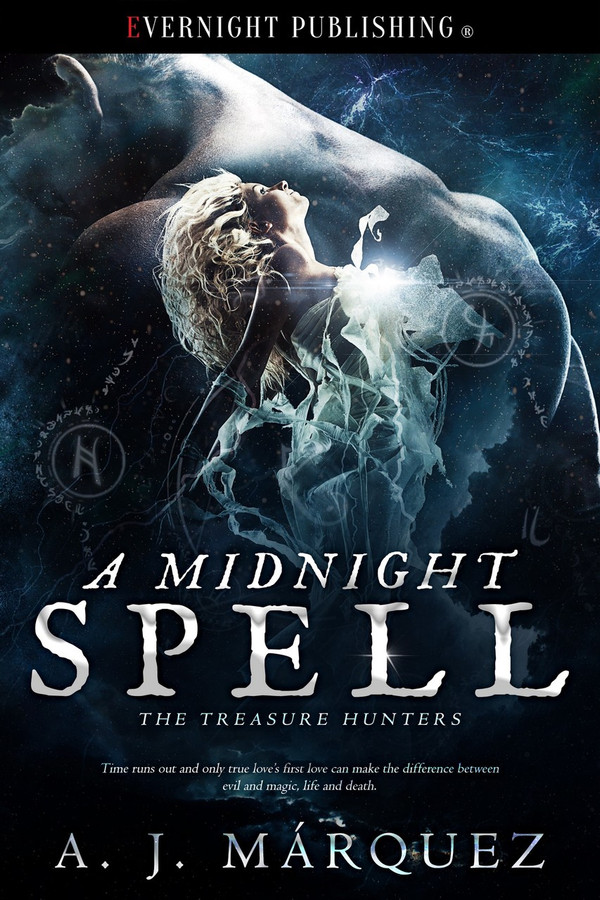 Lizzie Montgomery came to Montgomery Island determined to end a three-hundred-year curse that condemned her ancestor to wander the earth forever. But the moment Lizzie sets foot on the Island she realizes breaking the curse to free her great-aunt Charlotte’s ghost comes with a price. She may lose her own life if she casts the wrong spell.

Everything would be easier if she didn’t have to deal with Jake—archeologist extraordinaire—and his boxes of research on Paititi, the Lost City of Gold. Not only is he an uninvited guest, but he has in his possession what she needs: A book of spells.

Jake would gladly relinquish the book; the problem is the ghost who keeps showing up unannounced and her deadly threats. When he discovers Lizzie can lead him to the treasure he seeks, Jake promises to give her the book if she joins his expedition.

Clue after clue, Jake and Lizzie find their way into a murderous mystery full of trickery, black magic, and love. Time runs out and only true love’s first love can make the difference between evil and magic, life and death.

The table lamps on the nightstands and picture frames rattled when Lizzie slammed the door. Upset she’d come into his room without his knowledge, Jake scrutinized everything that came into view.

She’d only raised his curiosity about the book with her clandestine search. After their conversation at the beach, he’d browsed the bookshelves in the study but had only come across paperbacks and hardcovers. Nothing old enough to be what he presumed Lizzie wanted.

On second thought, Lizzie might’ve been on to something when she’d decided sneaking into his bedroom was a good idea.

Intrigued, he wandered about his room, running his hand along the wall. An accent table obstructed his path, and Jake pushed it out of the way. A faint streak running from the ceiling down the wall caught his attention. He followed the line to discover an imperfection.

“Hmm…” Jake slid to the floor and probed the layer that didn’t belong. He pressed on it hard enough to see if he would need something stronger than his hand. “Hate to do this,” he said, hauling himself up. He kicked the wall with enough force to break through to a hollow space. Jake went down on his knees once more. He slid his hand through the opening, shuffling through the debris, hoping there’d be something and preferably not a dead rodent.

Unable to look inside, he trusted his hand to do all the work. His fingers skated over a hard surface covered in heavy paper, and he struggled to draw it out of the confined area.A dusty, original-board, custom-bound book that had seen more moons than he’d been alive stared back at him. Jake blew off the dust, uncovering a black, paper-covered pasteboard.

“I’ll be damned.” Warmth spread through him, and he rocked back on his heels, congratulating himself. His instinct told him this was what Lizzie and Aunt Rosalind had come to retrieve. Someone had gone to great lengths to hide this book from others, which meant Aunt Rosalind had lied to him. A sense of uneasiness swept over him at that realization.

Careful not to break it or damage any of the pages, he went to his desk. Jake eased into his chair ready to understand the mystery surrounding this infamous book. He gave it the same level of reverence he would any archeological item; it wasn’t every day he came across something this old, regardless of its history.

He lifted the cover to the first page.

“Charlotte,” he read aloud, and a freezing chill ran up his arms.

In complete denial of what he’d experienced, Jake closed the book. He remained seated, pretending his shoulders weren’t tight or that the hairs on the back of his neck hadn’t lifted. Jake waited for his body temperature to return to normal and his insides to stop trembling. But a sudden cold sweat covered his hands.

He looked around, which was ridiculous because there wasn’t anyone else in the room. On the off chance there was someone, it’d have to be a burglar or something out of this world. Neither of the two options was a scenario he cared to entertain—not when he and the rest of the guests in the château were isolated on an island that could only be reached by boat.

Not a good thing to think about right now. He checked the time on his wristwatch with the aim to distract himself. Twelve midnight. Jake slid his chair closer to the desk. His fingers fidgeted the corner of the book’s cover as he considered his options. He could read its contents or put it away. Lizzie and Aunt Rosalind were welcome to it. In fact, he’d hand it over to them first thing tomorrow, but his inner voice urged him to satiate his curiosity first.

“To hell with it.” Jake flipped the book open and made it past the owner’s name, but his hand stilled when he reached the next page. “You have got to be kidding me.”

The rules are simple.

1. Revenge is a swift and powerful curse.

2. Romance is a virgin bride’s dress the color of fresh snow as is white magic.

3. Greed is the complete absorption of light as is night and black magic.

4. Love spells are long lasting and can’t ever be undone. Abuse them and risk a terrible fate.

5. Should a man come into possession of this book, he shall pay with his life within a fortnight.

“Fuck.” Jake closed the book at once. Dry heat spread across his forehead and he swept his hand over, trying to get rid of the non-existent sweat. He got to his feet and put distance between him and his desk. With a need for fresh air, he threw the window open, ready to be assaulted by the tropical breeze. Except it chilled him to the bone.

Unwilling to admit how disturbed and frightened this made him, Jake took a long breath and fastened his gaze on the jetty at the beach. A faint shadow stood at the end. For a second, he swore a pair of eyes met his before the figure disappeared into the fog surrounding the island.

What the fuck is happening? Did Lizzie and Rosalind have anything to do with this? Enough was enough. Eager to divest himself of that damn book, he turned on his heel, but stopped halfway, then retreated from the woman standing in front of him.

The same woman from the jetty.

“Rosalind can’t have this,” the woman said.

Jake stood frozen and unblinking, hoping this was an illusion. He’d worked on his research all day and took a break here and there but hadn’t had a decent lunch and was running on fumes. Yes. I’m exhausted.

“You must keep it in a safe place and give it to Lizzie five weeks from now.” She stepped forward. “Not a day earlier.”

For a ghost—or whatever she was—the woman was demanding. Though she didn’t seem dangerous, he wouldn’t take any chances. “Who are you?” he asked.

“Charlotte Montgomery.” With those last two words, she dissolved into thin air.