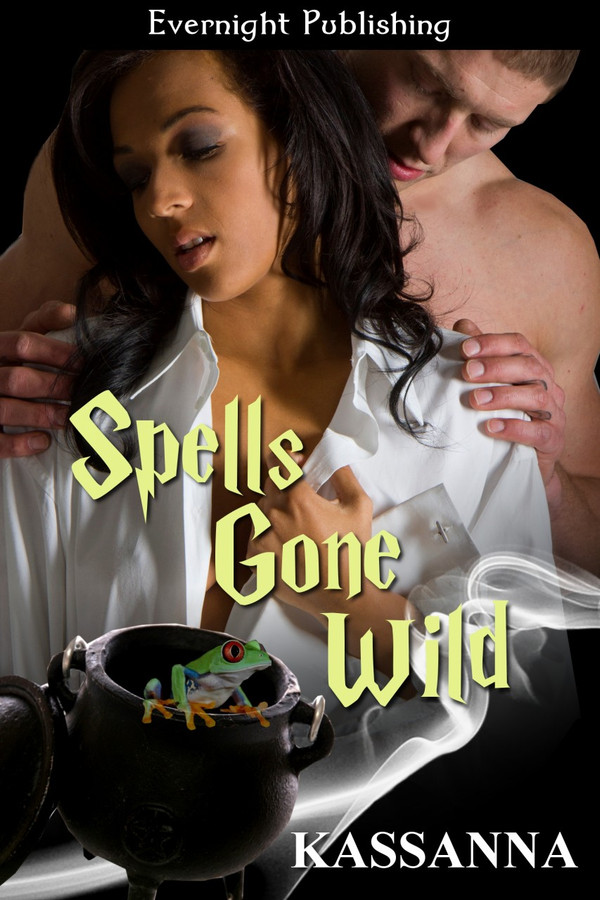 Kezia Smythe is a newcomer to Jaded Falls. The townsfolk don't like change, and they'd definitely not approve of her being a witch if they found out.

Doreen Dineen is the worst of the bunch, going against her at every turn. It doesn't help matters that the woman's son, Dominic, asked Kezia to marry him. She does her best to avoid her future mother-in-law.

When she accidentally turns Doreen into a toad...well, she'll just have to turn her back. If only she knew how.

When he pushed his old bedroom door open, he realized his mother hadn't changed much. The twin bed that had become too short for him at fifteen sat in the corner, neatly made. His mom had taken down all the posters of heavy metal singers that had covered his walls. She'd left the shelves with all his baseball trophies. They gleamed in the afternoon rays that shone brightly through the single window. Dust motes danced in the beams. The dresser was clean with the exception of a few men toiletries. A brand he wasn't familiar with.

On a hunch he opened the top drawer and then rubbed the back of his neck. There were men's undershirts and underwear, bright, white, and clear as day they weren't his, wrong size. Well I'll be damned.

“Everything all right?” Kezia walked up behind him, wrapping her arms around his waist.

“Most definitely. I was just thinking I have an idea where my ma might have gone.” He turned in her arms to look down at her.

“You do?” She swallowed

“You don't have to cover for her. Although given your relationship with her I don't know why you would.”

“Okay.” She rose up on her toes and kissed him. “Can we not talk about this now?”

“I love your brain, Ms. Smythe.” He bent his head to touch her lips and opened his mouth, sliding his tongue past her lips to duel with hers.

He hefted her up without breaking the kiss and walked in the direction of the bed. Her legs wrapped around his waist, and her arms enfolded his neck. Dominic gripped a denim covered cheek in each hand, flexing his fingers on the lusciousness that was her butt. His footsteps thudded on the floor, muffled by the dense carpeting. Their tongues tangled, and he slanted his head to get a better lock on her mouth. He felt one of her hands glide down his back, her long nails scraping his skin through the thin company polo he wore. Then she was pulling his hair, yanking his head back and dropping a row of kisses along his jaw. He closed his eyes, sinking into the pleasure-pain of her nails abrading his scalp.

He missed the bed.

Her back slapped the wall. Her heels dug into his ass, and she slid up, giving him better access to her throat. Dominic traced her collarbone with his tongue to the middle of her chest, kissing his way down the valley of her breasts as he heaved her up with his hands. Kezia's shirt pulled taut, caught between the wall and her back, outlining voluptuous orbs. Her nipples pushed against the material of her clothing, the V-collar dipping perilously low and forcing her mounds to spill over the fabric obstruction. He sucked the soft tissue into his mouth and worked his tongue over it, lapping at it.

Who hasn&#039;t had thoughts of doing this to their mother in law? This book had me reeling from sweet and romantic to sexy and hot and back to funny and it was a fun read because of all of that and more. Kezia was easy to relate to as the witch/heroine and Dominic was both protective and loving of his fiance. He was everything I would want in a man and sexy to boot. Great book with great characters and a nice plot.

I choose this rating because I have a hard keep up with the supernatural. Love the characters. I would recommend this to friends.

This is such a fantastic story, filled with tension, laugh out loud moments and a huge toad. How many would-be daughter-in-laws hadn&#039;t thought about turning their mother-in-laws into a toad? What if you actually had the power to do just that. That&#039;s okay if you can&#039;t answer to spare the guilty, but Kezia sure makes it entertaining to watch as she tries to figure out how to return her future mother-in-law back to her human state. It wasn&#039;t just the premise, but Dominic, Kezia&#039;s fiancé, also stood up for her. He let his mother know exactly how he felt about Kezia and stuck to his guns. I liked that...alot. Of course there&#039;s enough sexual tension and hot lovemaking to burn up the pages and I really hated to see the story end. Overall a very satisfying read and one I highly recommend. Thanks Kassanna for the great adventure.