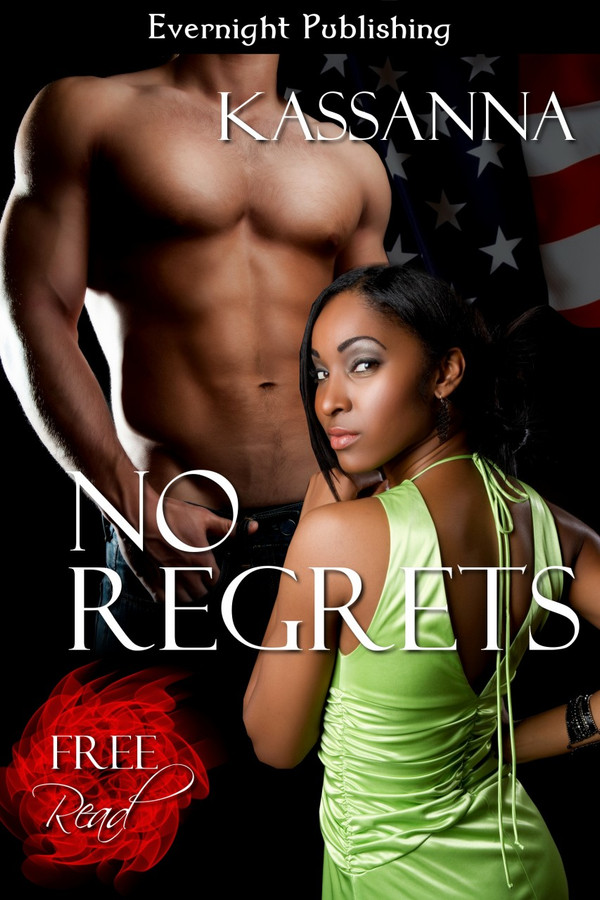 Azia Clemmon's husband has been on deployment for a little less than a year. On a whim she agrees to go out with a girlfriend. While at the club her girlfriend leaves and Azia is left to her own devices. Feeling empowered, wearing a little black dress, she decides to spend her night out on the town.

She meets a man and sparks fly.

Jase thought he was surprising his wife when he came home without telling her. He was the one in shock when he discovered her gone. Unsure what to do, he goes by the local club for a drink. That's where he saw her. It was wrong, he was a married man. She was a married woman. That didn't stop the desire that rocked his body for her.One night was all he asked for.

Come morning they would both have to go home and all they had promised each other was no regrets.

Azia pushed the door to the women’s room with more force than she intended. It hit the wall behind it with a clap, which echoed through the small room, the door bounced and swung back her way. She pressed a palm on the cool metal to stop its momentum. Her departure was abrupt but she knew she had to get out of Jase’s company, fast. Walking straight to the sink, she threw her clutch down, placed her hands flat on the vanity and stared at her reflection in the mirror.

“What the hell is wrong with you?” She berated herself. “Are you that damn desperate that you’re willing to fall into the arms of the first man that gives you a little attention? You are married, you took vows. You have children! Are you really ready to give that all up if you do what you’re contemplating?”

Azia turned on the faucet, cupping her hands under the cold water. Bending over the sink she threw the water up on her face. The cool fluid splashed against her heated skin, sending tendrils of awareness down her limbs. She’d been so close to falling into his lap.

She leaned forward until she was almost nose to nose with her image in the mirror.

“So what if the man touched you and your body hums? Pull yourself together, find a cab and make your way home. Hell, hide under the covers until sunrise. Whatever you do, don’t go back to that show.”

She nodded to herself. Pulling a few paper towels from the dispenser, she dried her face and wiped her hands. Throwing the damp mass in the trashcan, she wrapped her hands around the handle and pulled the door open.

Jase stood there, his hand in mid-air. He looked her in the eye and murmured, “I’m sorry.”

That was all she heard before he reached out and cupped the back of her head. She wasn’t sure if he dragged her into his arms or if she walked into his embrace. Regardless, he was there, his mouth on hers. His tongue probed the seam her lips created, demanding entrance into her mouth. She opened her mouth on a sigh and allowed him entry into the deeper recesses of the moist cavity. He wrapped his other hand around her waist, and he walked her backwards, back into the lavatory. The door closed with a swish behind them.

His tongue skimmed along her teeth, before pressing deeper. She pushed hers against his, seeking admission between his lips. She placed her palms on his chest and curled her hands into fists. His shirt bunched in her grip. Azia pulled him up against her. Sliding her hands up along his shoulders, to tangle her fingers in the soft short hairs at the back of his head.

She broke the kiss and her head fell back as he pressed kisses to her chin and throat. The hair around his mouth scratched her skin, and she moaned. He sucked the sensitive skin at the base of her neck and she dug her nails into the soft fabric covering his back. Her nipples pressed against the fine material of her dress, rubbing the sensitive buds.

He ran his tongue along the swell of her breasts, and worked his way down the valley between her tits. Azia couldn’t catch her breath. She slid her hands down to grasp his upper arms as he bent her further backwards. Jase moved across her body and he latched onto her erect nipple through the thin fabric. Wrapping his tongue around her taut nub, he shifted and placed a muscled thigh between her legs.

Her pussy clenched, and her core quivered. He slid his hand down over her hip before slipping it under the hem of her dress. His calloused palm climbed up her soft skin, leaving a trail of goose bumps in its wake. He splayed his hand on her ass and pulled her closer, forcing her to move up his leg. The pressure against her pussy pushed the small triangle of her G-string between her nether-lips and tight against her clit. The rough material of his jeans abraded the delicate lips of her cleft. She rolled her hips on his leg and her eyes drifted shut.

He nipped her nipple before releasing the hard bud and dropped minute kisses along her collarbone as he kissed his way to the other side of her neck. He tugged her earlobe between his teeth. Cream flooded her folds and she cried out as mini-spasms glided along her nerves.

Pressing his lips to the sensitive spot below her ear, he spoke. “Spend the night with me.”

This well written novella has an identical plot and execution to that of another novella. Because the other author crafted the element of &#039;did she? will they?&#039; so well, this book suffered for me as a result. What soldier at home on leave goes to a bar because he&#039;s come home unexpectedly and his wife isn&#039;t home? Wouldn&#039;t he have called her to inform her that he was home? Does the wife play while her husband&#039;s away? Does the married man forget his marriage vows in the face of temptation? Too married people who have the perfect opportunity to cheat, but do they? It is a great plot, but I wasn&#039;t in any doubt of the outcome, not for a second so that spoiled the tale for me, but it was well written and interesting.