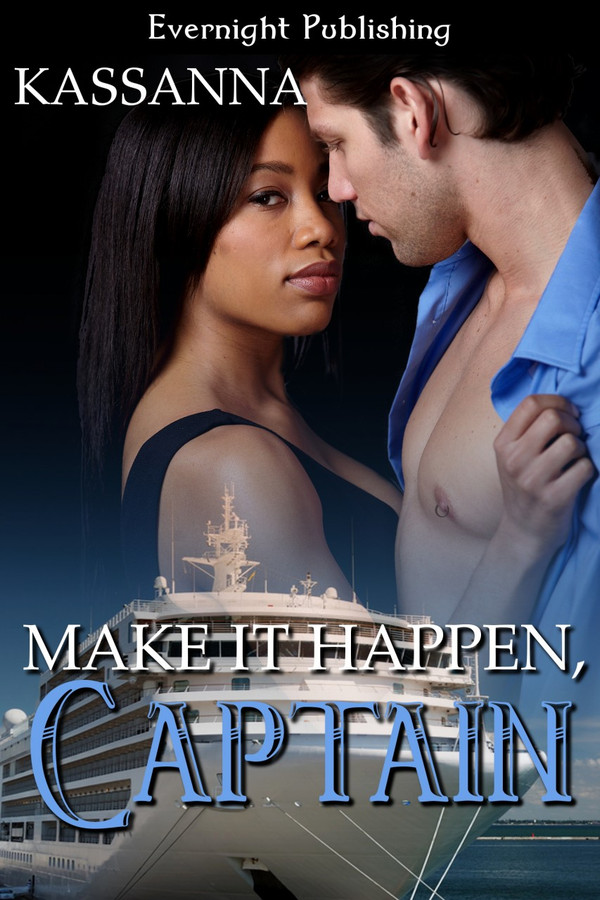 Cyn Fuller needed a get-away. She hoped to escape the usual family drama by taking a cruise over Christmas, and she was looking forward to the experience of a lifetime.

Her vacation wasn't one she expected…the single's cruise would have been perfect for her grandmother. Cyn was stuck for four days traveling with the geriatric crowd and fending off indecent proposals by much older men that popped Viagra like Pez candies.

Marcus Nickels was the youngest man in the fleet to ever be appointed captain. He took his job seriously, and the Christmas holidays were simply work days. That is until he rescued a mocha beauty from the clutches of a very persistent elderly gentleman while in port.

Then he saw her on deck and Marcus devised a plan of seduction guaranteed to make their holiday unforgettable.

“Does it matter?” Cyn countered.

“Not really since you’re a figment of my exhausted imagination.” He slid off a shoe.

Marcus watched in the mirror’s reflection as Cyn allowed the sheet to drop. Her heavy orbs swung gently, knocking together as she got on all fours and crawled to him. Placing a hand on each shoulder she slowly started to massage his tense muscles.

“Do I feel imaginary to you?” She squeezed the top of his arms.

“The ship stopped rocking.” She kissed his shoulder.

“I’m optimistic that we’re finally ahead of the storm. What are you doing here?”

She trailed her tongue along his neck, kissing the sensitive spot below his ear. “I had a long talk with a wise elder and thought what if our roles were reversed.”

“You’re willing to get your clit pierced?” He twisted around to look at her.

“Let’s not get ahead of ourselves.” Cyn leaned in, touched her nose to his, then slanted her head and kissed him.

Marcus slid his arms around her. He pulled her into his lap and glided his hand down over her soft skin. Her fingers burrowed through his hair. Her nails scraped his scalp. He pushed his tongue between her lips, sliding it across her teeth.

He skimmed his hand over the curve of her ass, gliding his fingers down the indentation that divided her cheeks. He circled her rosebud with his index finger and pushed against it. She reared up, pushing her breasts into his chest, her nipples hard pebbles scrubbing his skin. He sucked on her skin at the hollow of her collarbone. Squeezing his fingers between her thighs, he gripped one leg and pulled it to the other side of his lap. Marcus grabbed each cheek in hand and seated her on his erection. The heat of her pussy had his cock jerking urgently against his slacks.

Cyn rested her elbows on his shoulders and took handfuls of his hair in each fist, yanking his head back. Marcus smiled up at her.

“Tell me, Cyn, do you want to be in control of our little love fest?”

She arched her hips and slid her vagina along the length of his cock. “Would you mind?”

Marcus fell back pulling her with him. “My body is at your disposal, baby.” He flexed his pelvis up.

Laughing, she toppled down on top of him, burying her face in the crook of his neck. Her hair drifted across his chin, and the scent of mangos wafted to his nose. Wrapping his arms around her, he locked her in his embrace and inhaled deeply. Fighting the urge to flip her over, he relaxed his hold.

“Tell me, Cyn, what do you want? My control is slipping. I can’t be held responsible for my actions if we don’t do something soon.”

Cyn straightened her back, drawing her hands before her to rest on his abdomen. She nibbled on her bottom lip. “I want–I want you to eat my pussy again.” She waited a minute before adding to her request. “While I’m sucking your dick.”

Cyn Fuller is taking a cruise for Christmas, this is her gift to herself. She’s looking forward to lots of sun, relaxation, gorgeous men and no family drama. This is going to be her most enjoyable Christmas so imagine her surprise when she discovers that this is a cruise for seniors, and all the available men probably need Viagra or oxygen. Marcus Nickels is the captain of the ship, the S.S. Dreamweaver that Cyn is going to be cruising on. When he notices the distress of a young beautiful woman as she’s being hit on by an older man he comes to her rescue. Make It Happen, Captain is a cute title for a fun book which is filled with likeable characters and a decent storyline. The author Kassanna made you laugh when Cyn realized that all the gorgeous men she was expecting were old enough to be her grandfather. The chemistry between Marcus and Cyn was good and you as the reader were drawn into their developing romance. This reader especially enjoyed the interaction between her and the elderly Cyril who approached her wearing a speedo which no man young or old should ever wear. I chuckled as he tried to charm her into spending time with him by using a lame but cute pickup line. I have read many of author Kassanna’s books and the ones that I have read always had humorous elements which draws you into them. Make It Happen, Captain was no exception; the book had lots of humor as well as heat between Cyn and Marcus. Make It Happen, Captain is a quick read but is very entertaining.