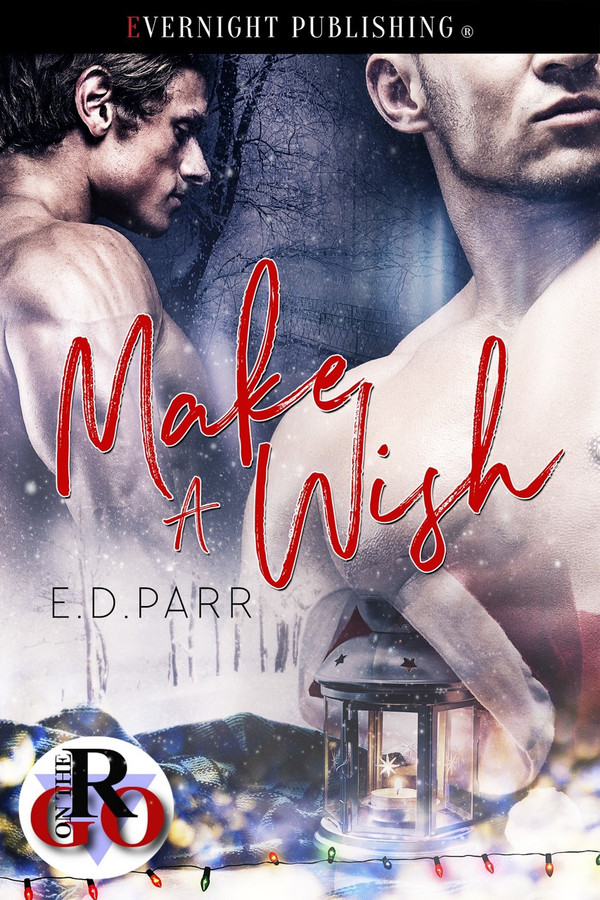 It’s the day before Christmas Eve and Nick Kringle is making deliveries on the main street of the city when a car breaks down at the intersection. He rushes to help him and comes face to face with the most delicious man he’s ever seen.

Amid the seasonal crowds and inclement weather, Dylan West gets out of his stalled car and tries to push it to the side of the road. Dylan’s down on his luck, but his hero Nick believes in magic and decides to throw a little Dylan’s way.

Can wishes come true? You bet—especially if Nick Kringle has anything to do with it.

The city street glistened with rivers of red, green, bright pink, and white light thrown there by the stores and cafés decked out for the holiday season. Rain fell in drifting sheets as a chill wind ravaged the shoppers rushing from one place to another, some laden with parcels, others hunched against the weather in their winter coats.

Nick parked his SUV in the first available space, opened the trunk with the interior lever, and leaped out. He didn’t feel the cold unless snow lay knee deep on the ground and even then, he enjoyed the beauty, and the way a new white fall would change the light, way too much to complain about the chill.

As he ran around to the back of his vehicle, the squeal of tires braking hard and the clamor of honking horns made him spin around. In the junction behind him, standing motionless, was a stalled car. Other drivers surged around the stationary vehicle, making everything worse by taking space in the oncoming lanes so that everyone crammed dangerously together.

The driver of the offending vehicle edged out of his open car door, narrowly missed by a small car that chanced overtaking just as the lights turned red.

Nick cast a keen gaze over the man, registering his muscled body beneath an inexpensive suit and his thick dark hair, pushed back from his forehead so that the front spiked up. Nick watched the man lean into the open driver’s side door and attempt to shove the heavy vehicle to the side of the road. The man’s pants stretched over his hard ass and a sigh of appreciation escaped Nick. With one hand on the wheel, and the other lodged in the gap between open door and car, the man clearly needed help. Nick clicked the trunk of his SUV closed and jogged over to help.

“Hi, I’ll lend a hand,” he called to the stranded driver. The man straightened to answer and Nick was face to face with one of the most gorgeous men he’d ever seen. Nick never hid his emotions. They shone from his ice-blue eyes and exuded from his well-toned body. He smiled at the man in a way he knew and didn’t care broadcast attraction, desire—pure sex.

Apparently unaffected by Nick’s charisma, the man gave a grateful nod. “Thanks.” He leaned into the task of pushing the car out of the way, as the traffic lined up behind him, and the sky opened with a fresh punishing downpour.

Nick placed his hands on the back of the car, and used his considerable strength to help shift the vehicle to side of the road.

The driver closed the door and approached Nick. “Dylan West—thanks so much for your help. People aren’t very forgiving of a broken down car at five o’clock the night before Christmas Eve, especially in this weather.” He ran his hands through his wet hair, visibly shivering in the thin jacket of his suit.

Nick’s gaze followed the man’s hands and then traced the planes of his handsome face. They stood close to a newspaper and magazine kiosk. The brilliant light from the neon tube snaking around the overhanging roof, and the blinking fairy lights, cast the man alternately in violet and then white illumination. Nick sighed inwardly at the perfect blue of the man’s eyes and the shapely mouth that he already ached to kiss. He introduced himself. “Nick Kringle—pleased to meet you. Can I give you a ride anywhere? I’m about due for a break in my deliveries. I have one up the road to do, and then I can be yours.” He waved his hand at his red SUV.

The tip of Dylan West’s tongue showed between his lips for a second as he caught some of the freezing rain full in the face. Dylan folded his arms in front of his wet chest.

Nick had a hard time not grabbing Dylan’s head and sliding his own tongue between Dylan’s lips. Truth was, he longed to meet a guy he could care for who would return his affection. Nick waited and watched Dylan hesitate, and then give in to the offer with a nod. His lovely hair fell forward onto his forehead. Nick’s hand twitched to push the shining, wet mass back.

“Thanks. I’m supposed to be at an interview. I only had a short way to go. Berry Brown on Fifth, do you know it?”

A sweet read for a chilly evening. I’m a sucker for Christmasy stories. This one hit the spot. The writing flowed well and the characters were interesting. For a quick read, it satisfied. Dylan’s had a rough time. He’s getting over being shot and he’s having a hard time finding a job. Like super hard time. No matter what he does, he can’t seem to get ahead. I could relate to him. I’ve had those days and what seems like week-long moments of nothing going quite right. There were times I thought he got a little too far into his depression, but if that was the author’s purpose then kudos. There were just times I thought Dylan was almost too…he wasn’t even willing to see the bright side. Then there was Nick. Talk about the opposite of Dylan. Positive and willing to help. I liked him and his can do attitude. When the two got together, things heated up. The thing was, the circumstances were a little odd, but I could go with it. If you’re looking for a short read for the lunch hour or a quiet night, then this might be the book for you.

It’s the day before Christmas Eve and Nick Kringle is making deliveries on the main street of the city when a car breaks down at the intersection. He rushes to help him and comes face to face with the most delicious man he’s ever seen. Amid the seasonal crowds and inclement weather, Dylan West gets out of his stalled car and tries to push it to the side of the road. Dylan’s down on his luck, but his hero Nick believes in magic and decides to throw a little Dylan’s way. Can wishes come true? You bet—especially if Nick Kringle has anything to do with it. Book Review A touch of magic is just what Dylan needs in his life: he is out of a job, has no real friends, and wants someone to love who can love him back. Nick Kringle may have a job and a loving family, but he is lonely too. So when Nick finds Dylan stranded with a broken-down car, he decides to help. Dylan has had a very tough year. His best friend turned out to be a criminal, then shot Dylan, and he has been trying to recover ever since. He can’t even seem to find a job so when his car breaks down on his way to an interview, Dylan isn’t even all that shocked. Nick has a much more optimistic attitude, but he has a supportive family and a great job. One look at Dylan is enough for him to decide that he needs to get to know him better. One thing quickly leads to another, and – as is tradition in Nick’s family – wishes start coming true as if on their own accord. If you like Christmas stories with lots of magic and sweetness, then you may like this short story.

Nick Kringle is a delicious hero with a touch of the supernatural about him. He sees Dylan West struggling and is there to help, but more than that he&#039;s attracted to Dylan immediately, and with the help of the holiday magic in the frosty air, he goes after what he wants. This is a contemporary gay male love story with a twist of paranormal. It&#039;s happy and full of surprises. A great holiday read.

I absolutely loved this wonderful, sweet, loving story. It&#039;s a shining example of what true Christmas magic is all about, with a very sexy twist .