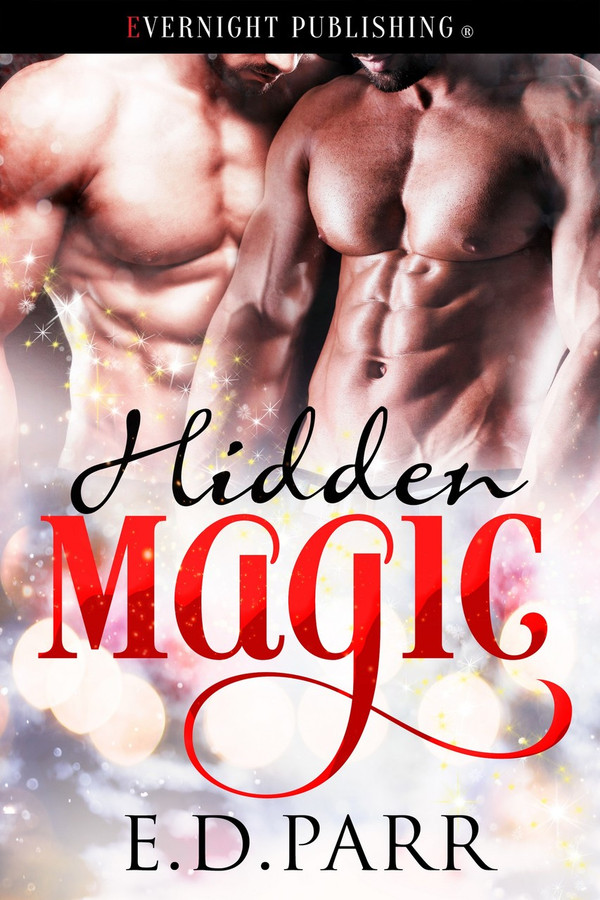 Owain Lovage belongs to an ancient family of elven beings, but he and all his family hide themselves among the ordinary humans of an English rural town, where Owain runs a reindeer farm and visitor center. Owain’s life is full, but he is lonely, yearning for a handsome, sexy man to love.

When Rowan Carter reluctantly leaves California to stay with his folks on vacation for the holiday season in England, everything is so much better than he expected—especially when he meets Owain. Captivated by Owain, Rowan seeks him out. Melting hot kisses in the snow are only the start of what he has in mind to do with this red-hot guy.

But Rowan is only on vacation, and his life in California is waiting. Is two weeks long enough to fall in love? And Owain’s secret, his elven identity, is a ticking time-bomb for their relationship. Does the answer lie in an ancient magic spell? Or are the two men doomed to miss the love they have begun?

Rowan made a face at his friend. “Unlikely—and if I did, what good would it be? He’d live in a different country. Here’s the real question. How am I going to stave off the boredom? There’ll be no parties, no special nights at our favorite gay bar—”

Jason shook his head as he interrupted Rowan. “I despair of you. Why go if that’s going to be your attitude?”

Rowan shrugged, knowing his friend had a valid point, but all the same, the optimistic comments from his group of friends over the last couple of months had begun to irritate him. When he needed a hug, empathy, and someone to let him wallow in misery for a while after his relationship break up, their constant attempts at cheerfulness hadn’t helped him heal his broken heart. He wished they’d just let him be gloomy for a few weeks, and as for him meeting someone special, Rowan had lost hope. It had taken so long to meet the man who’d finally broken his heart. Sex was easy to obtain, but love—not so much.

Rowan pushed his sandwich away and leaned back from the café table he shared with Jason. “I’m going to see my parents, and that will be good. They’ve wanted to take this vacation for a long time, and now Dad says he loves the place and wants to stay for a couple of months. I have to visit. It would be mean not to, but as for meeting someone I’ll expect nothing and that way I won’t be disappointed.”

Jason gave a loud sigh. “Look at this as an adventure. You might even get a white Christmas. You’ve never been farther than Palm Springs.”

Rowan tried to smile. “I know, but I’ve never wanted to. I’m happy here, and I kinda dread the eleven-hour flight.”

“Cowboy up, Rowan.” Jason grinned, then obviously giving up on the conversation, added, “Are you going to eat that sandwich? ’Cos if not, let’s go. I’m meeting Paul at two.”

An unwelcome spike of jealousy at Jason’s mention of his husband made Rowan bow his head. “I’m not really hungry. Let’s go.” They’d already paid, so he stood and walked to the exit.

Jason followed him into the bright sunshine of the unseasonably hot LA day.

Snow, ancient spells, secret identities, and a romance are the exciting ingredients for this charming wintertime story set in rural England. The quirky characters pulled me in as much as the mystery that was hinted at from the beginning, but unfolded only gradually as Rowan and Owain got to know each other. Based on a tiny hint in the early part of the story I suspected what might be going on, and watching the author develop the story was very enjoyable. Rowan lives in California, so he is a little reluctant about spending the holidays in a quaint English village. But his parents have rented a cottage there and he loves them, so he decides to give it a go. The scenery turns out to be amazing, but the real surprise is Owain. Rowan is attracted to him from the beginning, and even though he believes it will never be more than a holiday fling, he fully embraces their romance. Little does he know how much more is going on beneath the surface than he ever would have suspected! Owain has lived for a long time, and only a few of his family of elves are still left. He enjoys their Yule celebration, where they can all drop their glamour and appear as they really are, and he loves running his reindeer farm that provides lots of winter magic for visitors and villagers alike. Owain did not expect to be so drawn to Rowan when they first met, but it soon turns out that he cannot resist the human’s charm. When Owain falls too deeply he has no clue what to do – and what he ends up setting in motion has some very unexpected consequences. If you like elves, magic, and Yule traditions, if you want to watch two men fall for each other despite their very different outlooks on life, and if you’re looking for a cute read with lots of mystery, some drama, and a very passionate romance, then you will probably like this novella. It may be a slow burn, but it packs quite the emotional punch!

A positive 4* I wanted a sweet but sexy storyline, I should have known that it was going to be E.D. Parr that was going to give it to me. &quot;Sex was easy to obtain, but love - not so much&quot;. We all know that Christmas is a magical time, but Rowan is travelling to the UK to spend the holidays with his family (who have rented a cottage over the festive period), doesn&#039;t believe in the Christmas magic of getting what he wants - someone for him, someone he can love and that love returned. On going to buy a Christmas tree, he unexpectedly meets Owain. The attraction is immediate and love is in the air..... But Owain has secrets. Secrets he can&#039;t share. Rowan inadvertently stumbles across them. Drastic steps have to be taken to protect Owain but in doing so, Rowan finds that he too has secrets...... This was just so easy to read and so typical of E.D. Parr&#039;s relaxed writing style, which I always find a pleasure to read. Yet again her sexy sexy bits, hit the mark but the somewhat cheesey comments which I found quite endearing at first, began to grate on me towards the end. I wished she had toned that down a bit. Yes, I had worked out where the author was going with this, but I suspect that was her intention, as all the clues were there. A really nice Christmas read.

This is a beautiful, sweet, engaging, poignant, sexy, and captivating tale. The story had some unexpected twists and turns, plus the ending caught me by complete surprise. If you want to read something that is definitely NOT your average holiday story, then this gem more than fits the bill.