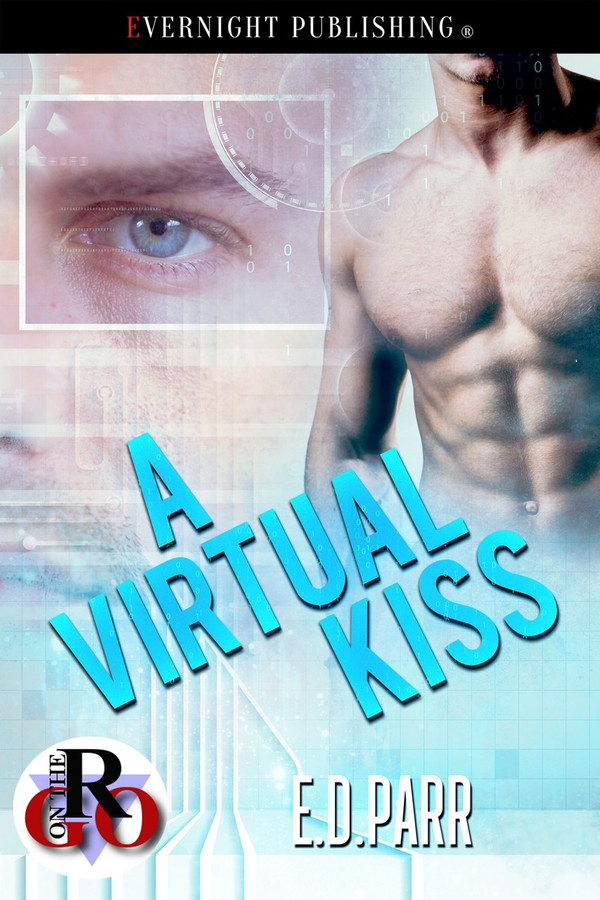 Nate Hathaway can’t resist the lure of private virtual reality rooms in a new Internet cafe that opened on the street where he works. He’s lonely and intrigued by the VR program offering a boyfriend experience. After only one date, Nate is hooked on Jason, the sexy, kind VR character.

Jason Graeme is the computer wizard behind the hot new VR programs. He’s a risk-taker, smart, and gorgeous. He’s also the body model for the boyfriend. A twist of fate brings Nate to his attention. Determined to meet Nate, he reveals who he is.

Passion sizzles between the two men as they fall in love. But Nate’s not the only guy in town who uses the boyfriend experience...

“Hi, babe. It’s great to see you.” The guy greeted Nate and then kissed him.

Nate’s entire body went into meltdown. The kiss was so real he grabbed the VR man and pulled him close, crushing against him.

The man returned the kiss but gradually drew away. He held Nate’s hand and brought him to a table outside the café. “Let’s get coffee. Did you eat yet? You look tired.” He reached out a hand and swept gentle fingertips down Nate’s cheek.

Surprised at the comforting gesture, Nate closed his eyes for a second to soak up the touch. He opened them and gazed at his VR boyfriend. “I’d like to hear about your day. I’m not hungry, coffee’s fine.” What will I call him? Does he have a name or do I just assign him one? Hell, he is gorgeous.

A server brought coffee. “How lovely to see you again, Jason, and you’ve brought Nate along tonight. The usual for you both?”

Nate blinked under the beaming smile from her. How does it know my name? Must read the credit card or Cory keys it in when he sets the room going.

She placed their cups on the table.

Jason. Nate smiled at his VR man. Yeah. I like that—a mythical name for an unreal guy.

Jason locked his gaze with Nate’s. Attraction and desire flared unmistakably in the cobalt eyes.

Nate’s stomach clenched. He leaned a little forward to take in the affection from his boyfriend’s expression. Comfort, warmth, and gratitude mixed with the urgent need to kiss Jason again. He looked down at the table, unsure how to go on.

Jason stood and pulled his chair along next to Nate’s. He sat and slipped an arm around Nate’s shoulders. “Hey.” Jason held his jaw and lifted his head. “Kiss me.”

Nate looked into the blue eyes.

Jason’s lips met his. He merged his mouth on Nate’s in a soft press then lingered, dotting little kisses on Nate’s parted lips, before slipping his palm around Nate’s head and deepening the kiss.

Overwhelmed with the tenderness and sex in the kiss, Nate pulled away and stood. “I have to get back to work.”

Jason stood, too. He made a grab for Nate’s hand. “What, tonight? That’s unusual. Will I see you tomorrow?”

Nate stared at the gorgeous man, shocked at the realistic way Jason’s voice held need and worry. “Yes, of course. I better go now.” Unable to resist, he hugged Jason close. It was just as if he held a real man to his body. He soaked up the feel, let go of Jason, and strode to the wall where the door to the room had been. The VR scene provided a row of shops along the wall. As the dreamlike quality of the experience remained, Nate sighed and tried every one of the handles on the doors, until one swung inward and he charged out of it into the corridor. His credit card popped up from the device slot. Nate snatched it. He put it into his wallet as he walked the length of the corridor.

Cory drank coffee from a paper cup at his desk. He gave Nate a wave. “See you again.”

Nate passed him, dashed up the stairs, and raced along the corridor to the young woman’s desk at the entrance.

He called, “Good night,” walking quickly by her, and wove through the tables and computer desks until he pushed open the glass door and stepped into the evening air.

Nate froze in the cool breeze. He breathed deep. This was real. The café building behind him was cream brick, chrome, and dappled glass, the bank over the street serious gray stone blocks with an ATM inserted along one wall. Nate stalked along the sidewalk glad of the traffic nearby, happy with the occasional blast of carbon monoxide until he reached the entrance to the subway. He went down to the platform.

On the train home, he gazed ahead as he hung from a ceiling strap surrounded by late commuters. It’s as if I’ve been with a real person. I can just about feel his mouth on mine. Fuck, he’s hot. I wish he was real. Should I go tomorrow?

Someone bumped him from behind. They tapped his shoulder. It was so reminiscent of Jason’s initial greeting. Nate strangely expected it to be him and twisted around hopefully.

An elderly man met his gaze. “Sorry. I was pushed from behind.”

Disappointment flooded Nate, but he tried to smile at the polite old guy. “It’s okay.” He turned away to stare at the ponytail of a woman in a beige parka who swayed with the car’s movements as they all traveled to the next station.

That night Nate lay awake. By two AM he’d made up his mind that if he went to sleep in the next half hour, his reward would be to go to ‘Splat’ that day and see Jason again.

As he relived Jason’s kisses, he drifted to sleep.

When a new Internet café, VR, and gaming venue opens up down the street, lonely Nate Hathaway decides to give it a try. But it’s the small print on the bottom of the brochure that truly tweaks his interest — &#039;Live your dreams in our private VR rooms&#039;. Once there, Nate chooses the ‘Boyfriend Experience’ and is shocked by how real the whole scenario seems. Nate is hooked and returns to &#039;Splat&#039; again and again. But what happens when Nate comes face-to-face with Jason, the model for the VR boyfriend character and also the computer whiz behind the virtual reality program? Let’s just say Nate and Jason take the fantasy and make it reality, and it’s smokin’ hot. But like most fantasies, is Jason too good to be true? I can’t give away anymore of this quick hot read, but who wouldn’t jump at the chance to not only meet their favorite character, but also spend some sexy alone time with them. Um, yes please! I appreciated the author’s VR world-building—a perfect cocktail of fantasy, reality, technology and sex. I thoroughly enjoyed A Virtual Kiss. Finished it in one sitting.

This was a sweet, fascinating, fantastic, intriguing, sexy, and interesting mix of technology, lonely men, and a touch of danger.