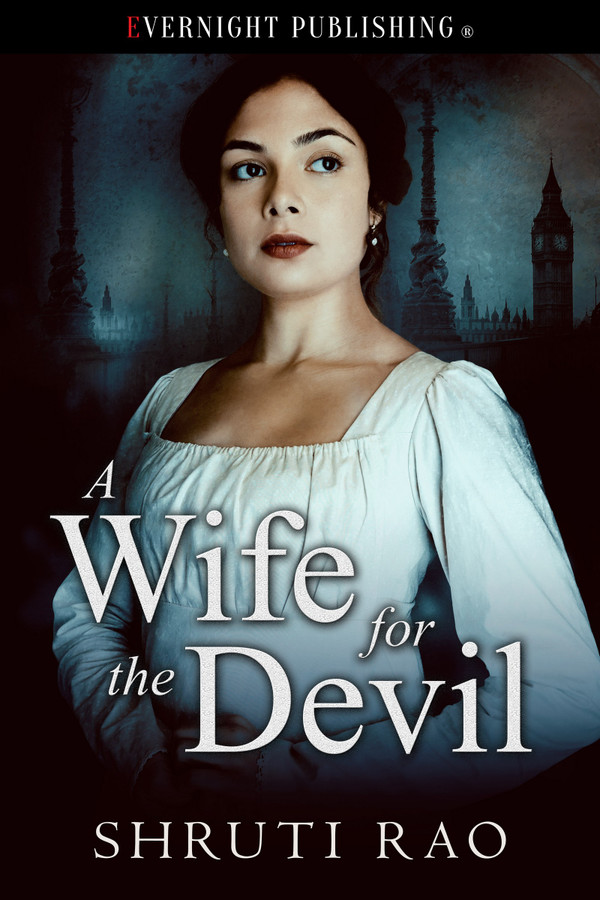 The illegitimate daughter of an Indian soldier and an Englishwoman, Elizabeth Lavoisier has never known true happiness or freedom. She survives only at the whims of her scheming cousin and is resigned to her fate until she meets the notorious industrialist Hugh Atwood.

Their attraction is immediate and scorching, their connection deep and visceral. But Hugh is driven by demons neither he nor Elizabeth completely understand, and Elizabeth could lose everything, even her pallid life with a family which does not want her. Soon they are plunged into the perilous world of the English aristocracy where they can trust no one, not even each other.

Is their love strong enough to overcome Elizabeth's low station and the tragic binds that hold Hugh?

She was shown into the library again, where this time, in contrast to the last, Hugh Atwood waited for her. He stood up from his chair when she entered. How odd. She wasn’t a lady, after all. He motioned for her to sit on the chair across from him. Did she imagine that a ghost of a smile played on his lips? She merely nodded to him and perched herself, spine held straight, on the chair.

Dusk was falling outside, and the air was full of cries of birds. The color of the light in the room was deepening, changing.

“So what is your proposal for me, Mrs. Lavoisier?” His voice was smooth as warm honey, and his eyes met hers insistently. She tried her best to ignore his emphasis on the word Mrs.

“It is not mine,” she said and instantly regretted her prickly tone. His face had taken on that infuriating, amused expression. And the ghost of the smile was no longer a ghost only. He was laughing at her, the dratted fellow! She calmed herself and went on, “Miss Miranda thinks this would work.”

She launched into an explanation of the strategy. Lady Frasier and her acquaintance with his mother. His mother’s acquaintance with the Duke. The salons the Duke held. His eagerness to meet Hugh. His obsession with collecting the industry’s titans. Atwood seemed thoughtful as she spoke. But when she finished, his eyes were sparkling and a smile seemed to tug at the corner of his lips.

“He would collect me,” he said.

“An unfortunate turn of phrase,” Elizabeth said, biting her tongue again. “He would enable you to help Penny.”

Atwood laughed, the smooth sound seeming to lave the skin on her hands. She refused to look at him directly. When he finished laughing, he said, “You ought to have been a lawyer.”

Elizabeth said nothing. She didn’t want to humor him. She wanted to convince him and then leave his house. “You would only have to show up for a salon with him,” she pleaded. “Lady Frasier says the Duke is quite happy to get Penny invitations.”

Atwood sighed. “I remember her,” he said slowly, “Lady Frasier. She would bring me wooden replicas. A windmill. Then a ship.”

“She remembers you,” Elizabeth said. And admonished herself promptly.

Atwood’s eyes were scanning her face when she looked up. His eyes seemed too bright, like a tiger’s. She spoke quickly, “She remembered your mother. And so I revealed our … er … predicament to her.”

Atwood held up a hand. “I don’t mind that you involved her,” he said. “All of London knows about our predicament. Is she your only friend?”

“Yes,” Elizabeth said, after realizing there was no better way to answer that question. She did not wish to reveal personal details to Hugh Atwood. But she also needed him, however temporarily.

“I wish—” Atwood began, but stopped. He stood up. A fluid motion, but Elizabeth thought she saw turbulence ahead. Elizabeth looked up at him, waiting for him to speak. He walked toward her instead. She shifted in her chair. He stood so close to her now that her skirt fell over the tips of his shoes.

Elizabeth wanted to run. Outside, birds were cawing and warbling their evening songs. The room was much darker now, the light of the dusk a deep purple. Above her, he blocked most of the light from the window. And she wondered if she imagined the sporadic glimmer from his cat-like eyes.

She did not run, however. She willed her legs to stay still, though she hoped he did not notice the slight tremor running through them. Some knowledge whispered to her that this was a man who noticed everything.

“Of what are you afraid?” he asked her.

She didn’t reply. He was disconcertingly tall. And disconcertingly blond. He towered over her now. She could smell his skin too. Something astringent and clean, like lemon and crushed leaves.

She found her voice suddenly. “I don’t understand your question, sir,” she said, her voice so steady that it baffled her.

“Yes, you do,” he said, voice smooth and his words even. “My acceptance means too much to you. I can see the way your throat works when you speak to me. And the furrow that seems to have fixed itself to your forehead. Has your sister threatened you?”

“I shall not answer intrusive questions like that,” Elizabeth replied. “If you’d agree—”

“But I don’t agree,” he said. “Not until you tell me the whole story. What has scared you so?”

Elizabeth drew herself up and stood. He was far taller than her. But she looked him in the eye, and her voice as level as possible, said, “It is you who seems to be threatening me, sir.”

He stared at her for a long moment. A crow cawed. The air in the room was growing cold, and Elizabeth wanted to hug herself. But she stood as calmly as ever, never once taking her eyes off his.

He was the one who ended their skirmish. He stepped back from her and moved toward the window. And turned away from her.

“That is the last thing I wish to do,” he said from the window, his voice so low that she wondered if she misheard him.

I struggled with the first few pages of this book so much that I read several other books but still I had to finish it-because I hate leaving books unread-I am glad I did. Once I got into the groove of the book, I could not stop. Elizabeth and Hugh captured my attention and the way their love blossomed is a credit to the writer. I would have loved to know what became of Miranda and what prompted the Baron’s hatred for his sister, Elizabeth’s mother. I loved it and will certainly recommend it.

The book seemed to start slow, but picked up pace much before I got bored. Elizabeth Lavoisier is a widow living in London. She also has a questionable parentage and so is shunned by her family. She works for them as a maid and is largely in control of her cousin, Miranda. (Miranda, by the way, was a fun character to read.) Elizabeth is sent by Miranda to cajole Hugh, who is the eponymous devil. Shenanigans and romance ensue! But the story is not without some darkness since Hugh has a terrible past. I really enjoyed this and I think fans of historical romance will in general enjoy it too.

For once, no simpering debutantes or rakish rakes. Loved the characters, their back stories and the simple uncomplicated love story! Great read! Will be waiting for more from this author!

I really wasn’t sure I was going to enjoy this. But once the plot got underway, I was pretty entertained the whole way. There really is not a dull moment. I am glad Hugh and Elizabeth got their HEA. Go for it!

I really enjoyed this romance. It seemed to have everything in it: interesting main characters with intriguing backstories, an interesting world and good writing. The steamy scenes are steamy. But there are plenty of simple emotional scenes that were very satisfying and interesting to read.

This book really takes me back to my childhood when I discovered European romances and read one literally every day. I love that the writer uses old fashioned words and expressions that we rarely use today - makes her storytelling unique. The narrative overall is a good balance between racy steamy romance on one side and detailed character and event buildups on the other. An easy breezy read from start to finish. Shruti Rao, thank you for the nostalgia!

Fans of historical romances will love this book. The love story is sweet, while the hero is a dark, brooding type. It is quite easy to empathise with both him and the heroine, Elizabeth. Her life is not that great at the beginning because she is an illegitimate child. When they meet – instant attraction. The plot that follows is fun too and has a lot of variety and adventure.

There are many things to recommend in this book. But the most significant one is the writing. The writing has flair and is emotive. Romance is usually not my cup of tea. But this was an exception. A good read. Will come back for more.

The Sea Wife by Naomi Clark

Devil May Care by Jenika Snow