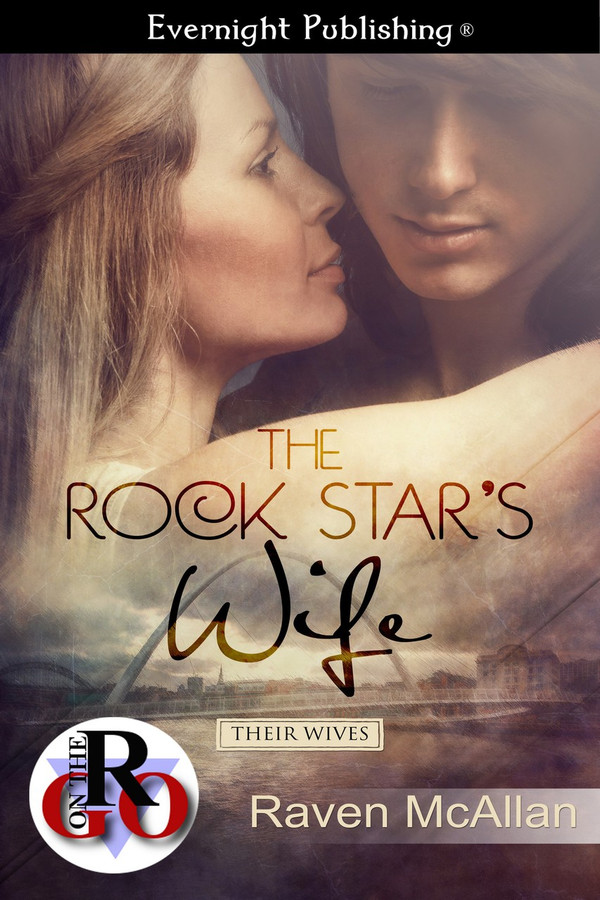 Rock Star Nico was in love with Kenna and wanted to do everything for her, coddle her, and keep her safe. The result? Kenna felt stifled, so it was inevitable they'd clash. That clash resulted in them splitting up—until Kenna turned up at one of his concerts and Nico had the chance to explain himself.

Would she listen? If she did, would she understand, and accept he'd changed and give them a second chance? All he could do was put his heart on his sleeve and hope...

All Kenna has to do is listen to her heart, and his, and decide...

"Actually since before then. Since just after we got married and you were a very absentee husband. I once thought it was a bit like, ohh a strange man got into my bed last night. I thought my luck was in and then I realized it was my usually absentee husband."

"Very." She sniggered. "Do you know you almost bumped into me at Hong Kong airport once? Literally."

"I did? And what happened?"

Some guy steered you around me and you gave me a vague smile and a 'sorry, babe'. I ducked my head down, and you went off to the first class lounge. I went to the food court and downed a burger and a bottle of fizzy water."

"Why? It didn't make any difference. I was still home three weeks before you."

"God what a fucker I was. Are you still sure you want to take a chance with me? Let me woo on?"

"Oh yeah. What comes next?" Kenna wound her arms around his neck and snuggled into him. Nico held her butt tightly and let his hands roam down a bit, and another bit and…

"Kenna, love. Are you wearing what I hope you are? With no knickers, you hussy?"

"Well." She tilted her head back to look up at him. This close the gorgeous specks in her eyes were pronounced. "I thought, you might be tired and it's one less thing to shuck off. And I have to be at the airport for eleven and its five now. Time is off the essence."

"Do you want just to snuggle then?" Hell, he hoped not. Masochism wasn't high on the list of things he loved.

"Oh no, we can't have you sulking now, can we?" Nico picked her up once more and headed for the bed to drop her with a gentle thump on to the bed. She'd thoughtfully—or hopefully—turned back the covers.

""I want you so much. I love you so much, I'm bloody shaking. Look." He held his hand out. "I daren't let you touch me or even me strip you, or I’ll come there and then. I'm so bloody hard it'll be difficult to even get my jeans over my cock. Can you take off your dress and bra for me? Oh and leave the stockings. It's a fantasy of mine. You in sexy grey stockings and suspenders, me buried deep in your pussy, and your long silk clad legs around my neck. Ah hell, fuck it." He counted to ten and thought of root canal treatment. "Ice water, cold baths come on, think cold."

Kenna laughed uninhibitedly, threw her dress and bra in the direction of her case, and opened her legs wide. Her bare pussy shone with the evidence of her arousal and her nipples peaked hard and proud.

"What are you waiting for then? Come on! I'm yours." Her smile was one of a houri, enticing and hinting of things to come.

He kicked his jeans off, pulled his t-shirt over his head and crawled between her outstretched legs. "Since when have you dared to be bare?"

"I love it," he said honestly. "It's so bloody gorgeous. I'm so fucking turned on, and it’s been a while, well since we last, okay, had sex but this is different, I won't last long."

"Good. Nor will I so stop talking, and please make love with me? Fill me now, or I'll end up coming by thought alone."

Nico needed no further bidding. He angled his body and Kenna put her ankles over his shoulders and played with his hard nipples.

"Fucking hell, woman," he gasped the words, surged into her and immediately began to move.

Kenna matched him thrust for thrust, moaned and sighed, and tightened her channel around his cock

Nico felt his body tighten in response, and the hot surge of arousal that signaled he was about to come rolled through him.

"Bugger. Now." He screeched the words and increased his thrusts to a painful level.

Kenna screamed, and even in his arousal filled sense, he knew it wasn't in pain. Yes… M...now… bloody hell yesss." Her voice ended on a high-pitched keen and she began to shake hard.

Nico let himself be pulled in to the vortex with her, saw stars and forgot everything except how well they meshed.

He had no idea how long it was before he opened his eyes to find somehow they'd rolled over with him still firmly embedded in Kenna, and she was now slumped on top of him.

I liked this book for the simple fact that she left him. She didn&#039;t feel like she was getting what she needed and she left. That&#039;s all I am willing to say on that, because from there it just gets better. Kenna and Nico are so sweet together. It got a little tangled up for me in the middle, but I soon came out of it. The journey of these two in such a short rad was amazing. Take a chance and find out for yourself. It&#039;s worth it.

Kenna married a rock star and then promptly realized he had no plans to let the world know. She was a secret and she was told by her husband what she could and couldn’t do. Nico assumed that once he was married that life would be exactly how he expected. She could do what he wanted and he would keep her sheltered away from the fans to protect her. But life isn’t perfect. Kenna has finally had enough. She’s at the end of her rope. Nico is never home, she never sees him, and he doesn’t acknowledge that he’s even married. It’s like she doesn’t exist. So she does the only thing she can do…she leaves. A quick decision has Kenna at one of Nico’s concerts. It’s been months since she’s seen him, and thanks to a new friend she’s dragged to the front of the line. Once he sees her, he grabs her and basically kidnaps her. Finally he can talk to her, to sort everything out. Because at the end of the day love is the most important thing. I loved this book. I loved the characters, the story, the new ‘friend’ she meets, his sisters, everything. Of course in the beginning I had the overwhelming urge to punch Nico but as I figured, he did redeem himself. The ending…well you’ll have to read this book for yourself to find out. But it was perfect and once again Raven has created a wonderful book.

Oh, how I loved this story...and it has absolutely nothing to do with the fact that the lead character&#039;s name is &quot;Kenna&quot;. It would have been great if her name would have been Levicka Pickleson...or Steve, for that matter. Kenna fell in love with a rock star. Unfortunately, because of tour schedules, he&#039;s never home. In fact, only immediate family knows they&#039;re married in the first place. It was decided it would be bad for business if female fans knew that he wasn&#039;t considered &quot;available&quot;. Take away the fantasy, take away the record sales. Another issue is that Hughes, for better or for worse, wants to &quot;take care&quot; of Kenna. That means no working outside the home...or ANYTHING outside the home, really. She is bored, doesn&#039;t feel loved, and leaves him. This is a short and sweet book about a man who has to win back the love of his wife. He has to see the error of his ways and get past his idea of how a husband &quot;should&quot; treat his wife and realize that no two people fit the same mold. I loved the humor involved with this story. Kenna goes to one of Hughes&#039; concerts and meats a delightful fan, spends the evening with her, and even fights her way through a throng of people so they can get up close and personal with him after a show. Speaking of up close and personal, Kenna and Hughes are very sexy together. Once they&#039;ve worked out their issues, their passion for each other takes over. I actually found this to be very sweet. I know I&#039;ve said that word already, but that&#039;s the perfect way to describe it. They&#039;re looking at each other in a new way, or in a way they&#039;ve not looked at each other in a very long time. The ending was awesome, and I&#039;m not going to give it away. You&#039;ll just have to read it for yourself. &quot;The Rock Star&#039;s Wife&quot; is the perfect way to spend an evening. It will make you laugh and smile, and your blood will get pumping too. Raven McAllan does it again!!