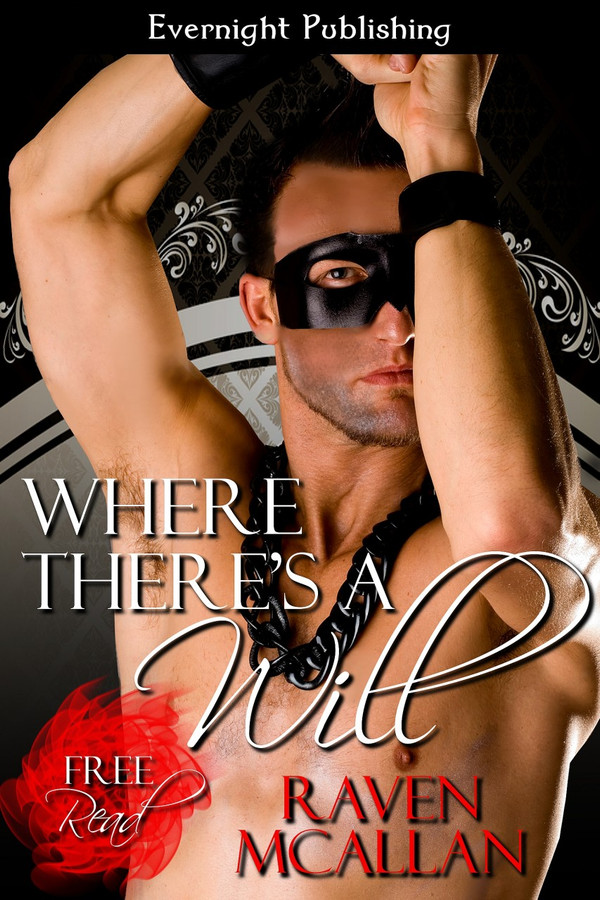 When William Lord Barlow gets lost in a snowstorm he does not expect his rescuer to ambush him in the stable, even less to realize his tormentor seems familiar.

Blindfolded and helpless, he soon accepts that the only way out is to submit. Will the Dom manage to turn into a Sub for one night?

The sharp pleasure pain, as the probing finger pushed hard into his arse-hole made him gasp and writhe. The pain left him so fast he had no time to wonder if it was always thus. A sense of weightlessness, of euphoria and desire to please and give everything he was capable of took over his mind, and he arched into that probe, demanding, nay begging for more.

His lover obliged, with another finger stretching and filling him, before they pulled out, leaving him empty and wanting.

He had no time to dwell on that emotion, however. Sweet lord a tongue licked and nibbled the sensitive skin that stretched between his balls and anus. Never before had he been the recipient of such overwhelming joy. Damn, I wish I could see this, see his face as he rims and makes me hover on the edge.

It seemed his wishes were answered, as his blindfold was removed, and his other shackle released.

Wise now to what would follow, he remained silent, and still, head bowed, not chancing even one small glance in the direction of his Dom without express permission. The situation had his nerves on a knife-edge, his body primed and ready to spring into action, and his teeth hard on his tongue to stop him uttering any unbidden words.

"That is good. You learn fast. I'm going to lift your shift over your head; you need to be naked for our enjoyment. Do not move until I relay your next command. I think you need to see your punishment, Will. Do you agree?"

"Yes sir, thank you, sir." Again he relished the chance to hear those words, usually uttered from his lips, and to be able to give the responses he would habitually demand.

"Stand, head bowed, and do not look at me until I command you to. Take your cock and stroke it. Show me how it weeps for attention."

That was one of the easier commands; eagerly he took his rampant cock in between his fingers and pumped. From under his lashes he saw an elegant hand appear and touch his nipple.

Busy fingers played, and a sharp pain, one so swift and sudden it made him gasp, circled and hit his tiny nub.

It stiffened and hardened as the silken thread around it tightened and bit.

Will concentrated on relaxing, and he waited for a similar sensation to assail his other nipple. However it seemed he had trained his lover well, for he waited in vain. Nothing happened. Instead his neck was nipped and sucked in such a way that his skin would be tattooed with a rich red mark for weeks to come.

"Now, Will, it's time to be punished for your transgressions. You will not speak, you will do as I tell you, and you will only come on my command. Do not move your hands, do not look up, or lift your head. Nod if you agree, speak your safe word if you do not."

Fab free read. I took this on holiday and it was more than the sun getting me hot! Great short story and would love to read more :D

I would give this book 3.5 out of 5 stars. It was short and sweet and to the point. There was a page or two that lost me a bit, but I quickly caught back up. The sex was hot.

Dom switching to bottom - this caught my attention immediately. In this historical romance, Lord William Barlow is lost in a snowstorm. Fearing freezing to death, he comes upon a driveway with a rescuer directing him into a stable to care for his horse. From here, Will is bound and taken into a room for some smexy hot sex. The BD in this story is a delight. The BDSM is just right between Will and his captor. Will&#039;s dark fantasy to be the submissive for once is realized and it&#039;s as good as he hoped. For a dominant, this switching is unusual yet it helps him gain a better understanding to be a better Dom. I thoroughly enjoyed this little scene. However, the story is a bit odd. There were tangents to the story, which were unnecessary. While I understand why the arranged marriage was added in, it did not enhance the story. Another piece which threw me was the mention of a &quot;driveway&quot;. This word did not exist in 1818 when this story took place. For a historical romance, it is recommended to strive for historical accuracy. Prior to automobiles, the path to a home was called a private road. There were a couple of other parts to the story which didn&#039;t flow exactly right or make sense. Still, it was a good hot m/m BDSM romance. This short story is recommended to m/m romance lovers who enjoy a kinky flip.

Whoa, can someone get me a drink of water. Oh never-mind, douse me in an icy bath. This was excellent, a very hot and steamy read. I was immediately draw to Will, the MC, and his predicament. He, being the dom, was out in a storm and forced into needing help, but at what expense? Will was brilliant about it, and hoped, as he was being taking captive,that his normal sub was the lover in disguise behind his situation. He had no choice but to trust his captor. Will is the self assured man, who as much as he tried with Hetty, just couldn&#039;t submit to her wishes and desires. Will didn&#039;t submit to anyone, up until now that is. This was a truly enjoyable read and I enjoyed watching a semi-forced role-reversal. Will and his mysterious DOM, open up possibilities...one&#039;s that will definitely be remembered. Way to go to Raven McAllan! You did a wonderful job!