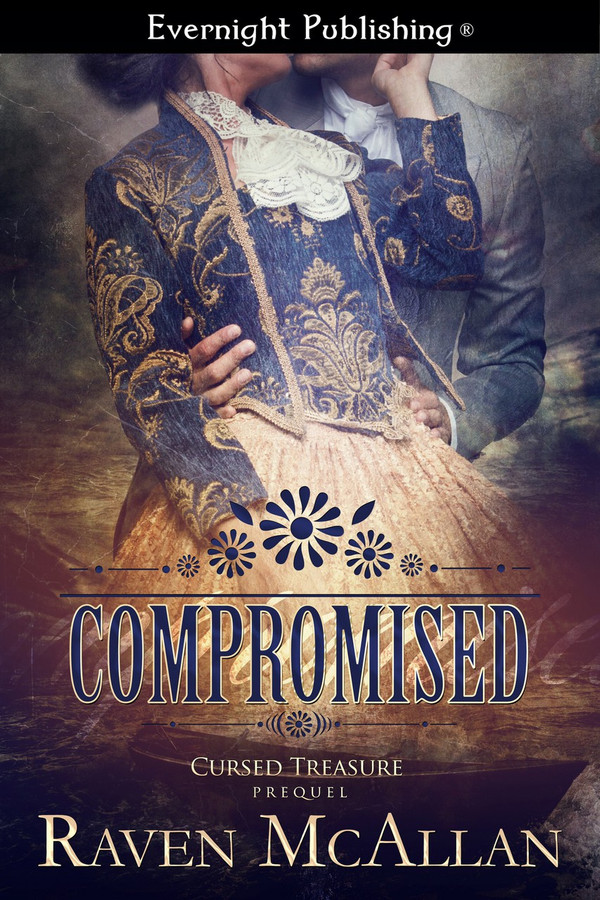 "Pay the price. The heart of ye child to be liftin the curse. Dare ye risk it?"

When Mijo escaped from Madame Le Guillotine and set sail to England, little did she know who her savior was, or what he would mean to her.

Theo was enchanted by his émigré, but knew what trouble they could be in. After dodging the French, revenue men, and smugglers, now they had their feelings to contend with. Passion was all well and good, as long as they could weather the storm it unleashed, and solve the curse.

"We have several hours' walk ahead of us. Unless I can beg, borrow, or steal a nag. Watch the rocks. They're slippery." He took hold of the arm she hadn't used to clasp her bag in a death grip, and helped her over several large boulders. "We need to edge behind these, and then we'll be off the beach, and safer."

"Safer," he confirmed. "As in not quite safe yet. Excuse my hands." He took hold of her nicely rounded posterior and pushed to help her scramble up a series of rocks and scree before he followed. "Now we are safer. And just in time." He cocked his head. "I think our vessel has been spotted. I should have known he wouldn't give up."

"Who?" Mijo gasped as he patted her bottom to move her forward. "Who is chasing us?"

"Me, not us, although now I suppose it is us. Damn the bastard, begging your pardon. Come, let's move on as fast as we can. And for the love of all you hold holy, if I say do something, then do it. Your life and mine may depend on it."

Behind them, he heard the distant shouts of several men. Theo didn't wait for an answer but touched her bottom again, somewhat harder than before.

"Hush, berate me when we're safe. That way, head for those trees, as fast as you can."

"I thought you said we were safer?" Mijo said breathlessly as she half ran, half stumbled toward a distant copse, her bag held tightly to her chest. It looked so heavy, but she clutched it as if her life depended on it.

Who knows, maybe it does?

"Where now?" She paused, and he indicated a tall oak. "Behind it, as quick as you can. We're not out of the woods yet."

"I can see that." Even as she scrambled on, she nodded toward the woods. He huffed a laugh. At least she still had her sense of humor intact. So much for safety. "You lied."

At least she hadn't argued.

"I lied," he agreed. "I had to get you moving. This is the Eston Gang's land. If I were to be caught here, dressed like this and with you, all hell would be let loose. There's no love lost between Gabriel Eston and me." Her bag bumped his leg as he hurried her on. It hurt like hades, and Theo bit back a yelp. "What on earth do you have in there? Gold bars?"

"Of course," Mijo said without missing a step. "How else could I secure my future?" She sniggered. "I could hardly bring my house or my jewels. Anyway, I pawned them—my jewels, my house was seized long ago—to get away from that pig Etienne Blanc."

Theo whistled. He'd heard of him. "Then I hope it's his gold." He veered off the track and plunged into the trees, weaving in and out in a seemingly random manner.

"Of course it is," Mijo said indignantly. "Gold ingots are not my usual fleeing companions."

Theo snorted. "What is?"

"Never having fled before, I have no answer to that."

They entered the trees, and Theo held her shoulders to guide her as he led her in a convoluted manner through the bushes and trees. "Follow me. If I say down, crouch and stay still." He was pleased her dark green gown was splattered with salt and mud and would be perfect camouflage if needed.

"Sad as I am to show my weakness," Mijo said faintly after several minutes of walking at a pace many soldiers would find hard to keep up, "when can we slow down? I have a most uncomfortable pain in my side."

"Five minutes and we can rest." Theo checked his route by memory and led the way down a ravine. "Follow me here. Once we're across the river, I know of a cave we can hide in and recover."

She obviously decided to save her breath and nodded.

He slid to the edge of the river and turned to help her the last few yards. "Wet feet now, I'm afraid."

In the faint predawn light, he saw Mijo roll her eyes. "As they haven't dried from the boat, I can't see it matters." She gathered her skirts and tucked them into her waistband once more. Her shapely legs gleamed pale in the moonlight as she removed her half boots.

Theo let his body tighten and admire her for a brief moment before he bent and removed his own footwear and slung it around his neck. Why did his arousal appear at such an inconvenient moment?

"The water is cold, and the riverbed slimy. But it's shallow and not too wide. We've had a dry month. Take my hand." At least the cold would shrivel his pego and lessen the chance of her outrage at his reaction to her. It would be too much to hope that she'd like his body's visible admiration.

Mijo gripped his hand firmly as they made their slow and steady way through the rippling river and on to dry land once more. It was one place Theo dare not hurry.

"Three minutes," Theo said. "Then we can rest." He hitched the bag he'd brought with him from the boat higher on his back. "I can even offer food and drink. Basic but fine."

"Thank goodness. I'm starved." She scrambled over a rock and around a bush. "Do I have time to put on my boots?"

Theo nodded and waited with one ear cocked to the east as she slipped on her footwear and laced them. He didn't bother; his feet were as tough as leather.

She straightened, and he indicated upward, skirted a couple of bushes to reveal a low, shallow indentation in the rocks. As they reached it, her tummy rumbled, and he laughed.

"Safety after terror tends to do that to one. In you go. You might not be able to stand until you're several feet inside."

He admired her rear as she went down onto her knees and scrambled forward. Even decently covered in serviceable wool, the heart-shaped outline called to him in every basic way imaginable.

Her arse? Just in time he realized she wasn't describing her attributes, but the cavern.

I&#039;m a sucker for historical romance, and although this freebie was WAY too short (because I wanted more Theo! More!!) the story is thoroughly enjoyable. Great premise, believable characters, and enough to heat a person up on a chilly night.

COMPROMISED is a prequel to the Cursed Treasure series, and did it&#039;s job. I want to read the entire series! I haven&#039;t read the rest of the book descriptions, but they&#039;re on my wish list. I&#039;m fascinated with the story and these two characters whose life together is just beginning. McAllan&#039;s writing snagged my attention, kept me reading, and her characters are unique, charming, and made me like them. This story is set in the French Revolution, and Mijo (Marie Josephine) is running for her life. The too-gentlemanly-too-aristocratic-sailor who whisks her across the Chanel in dead of night enjoys the danger (and kissing her cheek, nose, forehead, hair every chance he gets) a bit too much. McAllan&#039;s style captivates! This is a quick read of approximately 27 pages. Sensuality Level: Hot Language: moderate Violence: mild to moderate Highly recommended to fans of European Historical Romance