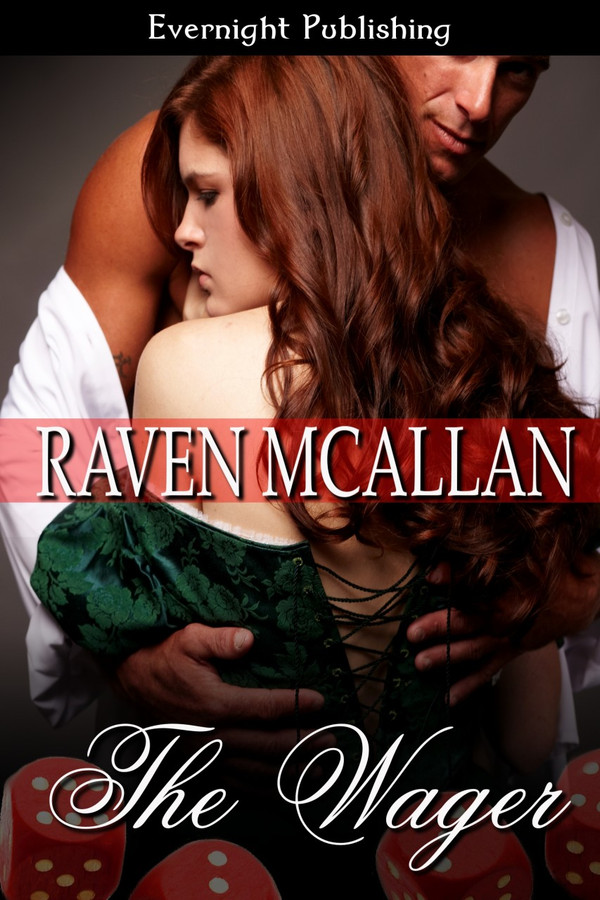 Catherine is in despair. Her brother has lost a wager and the prize is her. The winner is the one person she dare not be in thrall to. How will she cope?

Brook suggests they wager on the outcome of the previous bet, but he intends to win.

What happens is more than either of them anticipates.

"Will you ride…?" He paused and looked her up and down. Her muscles clenched, and her mouth went dry. The looked seared her to the center of her soul, and her pulsed raced at his innuendo. "With me?" he continued. She choked on nothing and he grinned.

Catherine glared and he smirked. Her hands once more itched to touch his skin, and not in an arousing manner. Unless he was one who enjoyed pain. She gritted her teeth and dipped her head. "Gladly, if it means this farce will be soon over."

Brook lifted her so she could swing her leg over the saddle. His eyes lingered on her ankle, and his hand held on a fraction too long as he helped her settle her foot in the stirrup. His touch seared her, when she looked down she was amazed his fingers were not imprinted on her skin.

"Farce? Not of our making my dear, but if you feel that way you should have reneged. As you didn't, well, now 'tis the time for me to call the tune. Follow me, or do I need tie the horses?

"No, I will follow," she said. "For what is the point of deprecating? It happened, I bowed, and agreed to your demand." Catherine settled deep into the saddle, and patted the mare, who whickered softly. As she allowed her mount to tuck close behind his horse, she could not but admire the spirited steed he swung up onto it. Neither could she stop the frisson of excitement that coursed through her, making every nerve end tingle. She had not felt so aware since she last crossed words with him.

Her horse, Misty, Brook had told her, plodded behind his, as the path wound its way between the tress. They were densely planted and not easy to see between. Several times he seemed to change direction for no reason, and Catherine wondered what was going on. Were they doubling back on themselves, or was he deliberately trying to disorient her? On occasion a tiny glade would appear, and once a waterfall that fell down a sheer rock face for five or six feet, its base covered with tiny spring flowers. She would have loved to stop and pick some, to walk around the area, and enjoy the serenity she sensed there. Brook ignored them and continued on his less than straightforward route. After a while, although she was entranced by those tiny glimpses of something other than trees, Catherine was bored by the ride and beginning to get other ideas about the man ahead of her. His seat on his horse was straight, his back elegant, and his buttocks taut. Why had she been so altruistic in the past? If that was what she had been. Now she thought perhaps the word for her action was 'foolish'.

The track twisted around a shallow pond, the water in it dark and full of weeds. Catherine shivered and her horse sidestepped as her movement projected to the animal. She soothed her with a few soft words and averted her eyes from the disgusting water. For one brief second her imagination had gone haywire. All she could think was what a good place it was to hide a body.

Catherine is seeing red. Her brother has just informed her that he has lost a game of dice and she was the wager. When her brother tells her who won the game she becomes even angrier, if that were even possible. Brook never thought he’d get a chance to be with the one person he loves ever again. But when her brother makes a wager and loses Brook sees it as his chance to win back the woman he has always wanted. Catherine agrees to the end result because she wants to make sure her family doesn’t lose everything. But when he realizes that she has agreed not because of him but out of duty to her family. He realizes he needs to find a way to keep her. What better way to do that than yet another wager. If she wins she can walk away and he will consider the price paid. But if he wins she has to stay with him, permanently. When the game is played who is victorious and will the winner hold up their end of the wager? I wouldn’t necessarily say this is a short book when you compare them to other books Raven has written, but it reads fast. The book was over before I expected. I loved the ending, it was perfect.

&quot;The Wager&quot; is an interesting mix of sexual innuendo and smart dialogue. The story is short and doesn&#039;t allow for much background info or strong character development, however, it is still an enjoyable read with a sizzling chemistry between Catherine and Brook. Catherine&#039;s brother wagered her in game and lost. Now her fate rests with the man she once rejected. When Brook offers another wager, Catherine isn&#039;t sure whether it would be better to win or lose.

What an adorable little story! The plot was so cute and the characters were really fun; the story flowed so well that it seemed like I had barely picked up this book when I finished. I loved the chemistry between Catherine and Brook and I loved how they chose a game of dice to dictate whether they would be together. They were clearly in love, but both had too much pride to admit it to the other. There was no sex involved, but I didn’t feel like that was needed to demonstrate what they meant to each other. The only thing I didn’t like in this book was how short it was. Had it been longer, it could have been really great. One thing is certain, Raven McAllan has found a new fan in this reader and I will absolutely check out her other books.

I really enjoyed this book.