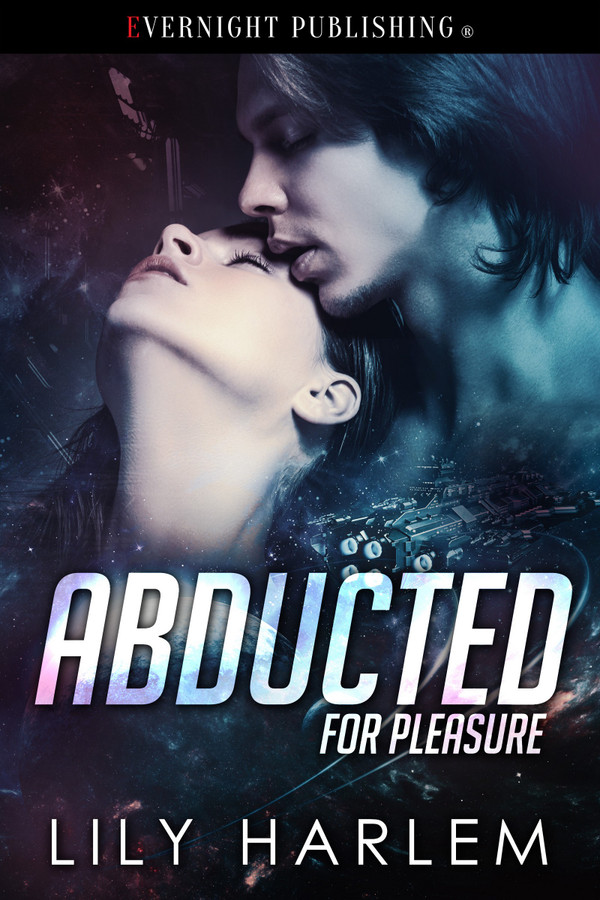 When life hits a dead end, it’s time to reach for the stars.

Which is exactly what’s happened to Naomi. Fed up and stuck in a rut, she finds herself magically transported to another time and place. Her feet are no longer on the ground, her body no longer her own. She’s well and truly on a breathless, intergalactic, seductive adventure.

Because her alien abductor is all about pleasure—the science of pleasure—and Naomi just happens to be the key to the future satisfaction of thousands of Earth women. But will Siren ever see her as more than a specimen, an object to be studied? Or will she convince him she’s the one he needs at his side … forever. Only time will tell. Only fate will decide.

Again she fought it, attempting to free her ankles while the thing was moving. But it was to no avail. She was well and truly attached.

“Please be calm,” he said, turning. A neat line creased his brow.

“Soon I will, I promise. I expect you need to shower and eat after all this time.”

“Yes. Yes, please, I want that. To eat. To shower.” Hope sprang inside her. Was she about to be released?

“And that’s what will happen.” He paused. “I promise. And I do understand what a promise is.”

He smiled, a calm, gentle expression that both reassured and scared Naomi. He seemed so normal, so nice looking and genteel. Yet here she was, tied down and at his mercy.

“We need to calibrate,” he said.

She gulped and a flutter held her belly hostage. “What device?” Damn it, she knew the answer to that.

“The one I just inserted.” He turned back to the screen, swiped it a couple of times, the numbers and graphs moving and changing.

“Commence calibration.” The words came from a speaker to her right, the voice electronic, weird, like the one she’d heard before. Neither male nor female.

“Calibration commencing.” He looked up.

She followed his line of sight.

A hole opened in the ceiling, and a cylindrical glass tube slid down. Within it was a long, thin device with a black, domed end.

When it was level with Siren, a window opened with a hiss. He removed the forearm-length wand and cupped his hand over the dome. “Ah yes, this is exactly what I requested.”

Before he could answer, the cylinder, empty now, whizzed back into the ceiling and the hole closed.

“The implantation,” he said, standing at her side and cupping the head of the dome, “is to monitor the physical effects of the human female orgasm.”

Her mouth dried. Her throat tightened. What the heck was she supposed to say to that?

He continued speaking, gesturing to her pussy. “It will detect the smallest changes in moisture, temperature, and blood flow, as well as voluntary and involuntary muscular movement, spasms, contractions, that kind of thing.”

“But … but why do you need to know that stuff?”

“I told you, I’m a professor and this is important research in preparation for the retrieval.”

“Retrieval?” What the heck was he on about now?

“When we retrieve the human females, we need to know everything about keeping them.”

“You plan on doing this again?” She paused. “To more women?”

“Indeed we do. Many women.”

Horror pulsed through her. This was a planned kidnap on an industrial scale. “You can’t … you…” Disbelief stole her words as she stared at him.

He studied her, head tipped as if waiting for her to go on.

“But … I mean,” she managed. “Why do you need to know things like the temperature of their pussies when they … when they come?”

He wagged his finger. “We do not want to make mistakes. The Kraken pride themselves in doing everything to the best of their ability.”

Her thoughts spun, crashing into one another. His depraved and alarming plan sickened her.

“Start what?” Apprehension gripped her. Why was this happening? Was it all a dream? She bloody well hoped so.

“Start building you up to orgasm.” He flicked a switch on the side of the device he was holding. A soft buzzing noise came from it. “Yes, this should work perfectly, providing my research so far is correct.”

Actual rating: 4.5 stars. Abducted For Pleasure is fresh and unusual for a sci-fi romance filled with pleasure and discovery. It&#039;s heated intensity, honest emotions, and bittersweet longing. I always love Ms Harlem&#039;s sci-fi romance because her premises are so unusual. Take this one for example, Naomi gets abducted to be experimented on sexually so that the Kraken can learn how to pleasure Earth women. Granted, I haven&#039;t read much sci-fi romance of late and I know the whole abducted by aliens premise is nothing new, but I enjoyed Ms Harlem&#039;s approach to it and found it different from what I&#039;ve gotten used to reading in the past. I particularly enjoyed Ms Harlem&#039;s take on the various alien anatomy and technological advancements which made the setting seem new and unique. Particularly original was the way the Kraken men ejaculate. You&#039;re just going to have to trust me on this one or read the book.

Oh my stars! I love this book. This is a sci-fi, alien man and human woman, fast-burn romance. As the title indicates, this is a dirty, sexy, alien abduction story. There’s a lot of kinky action (spanking, toys, light bondage), a few funny parts, and a surprising amount of mushy love stuff. The pleasures that Naomi experiences go from non-consensual (she is the abductee) to consensual, so maybe I shouldn&#039;t have enjoyed this as much as I did (I know, I have issues). I also got teary-eyed a few times towards the climax and ending of the story. Naomi is a lonely, 20-something woman who works in a call center. She hates her job, so a couple of her best friends try to help her relax and laugh by taking her out to wine bars. Their pub crawling leads to their abduction. Now here&#039;s where things get interesting (-ly dirty): Naomi is the guinea pig for Siren, a Kraken scientist who needs to learn more about human women and their sexual pleasure. I admire how while Naomi is freaking out about her situation, she also worries about her friends. I can appreciate how much she freaks out at first. Having said that, something akin to Stockholm Syndrome happens to her. (I think it&#039;s all the orgasms, plus Siren is hot in his human and alien forms.) Naomi’s emotional rollercoaster goes from confusion, panic, and anger, to attraction, desire, affection, and - eventually - to love. I especially enjoyed when Naomi tried to take control of her situation. Unfortunately, Siren didn&#039;t. I like how alien the Krakens are: They have lilac skin, mauve eyes, and cute little horns on their heads. They also have a non-human way of ejaculating. I would have liked to know how they were planning on reproducing with their future women. I also love the ship, Nuria, and its technology. The sliding doors, the funky laboratory, and the &quot;microwave&quot; were fascinating. Despite the alien Dom and non-con stuff, I also developed feelings for these aliens. I hope that the 100,000 human women taken to planet Kraken find love and lots of orgasms. There are some questions left unanswered, so maybe there will be a sequel. I would definitely read it.

What happens when you feel your life is in a rut you wish sometimes things can be different, what Naomi discovers that life can be so different when it comes to living and breathing on another planet. What she never expected is Siren. He is a a Scientist from the planet Kraken and he has been sent to find what will bring pleasure back to the planet from where he is from. What Naomi and Siren experience is that coming together will bring joy not only to themselves but to the whole planet of Kraken. Being together is obvious not the norm but they will see that anything and anywhere is possible if you both wish that it can become a reality.

Muscling In by Lily Harlem