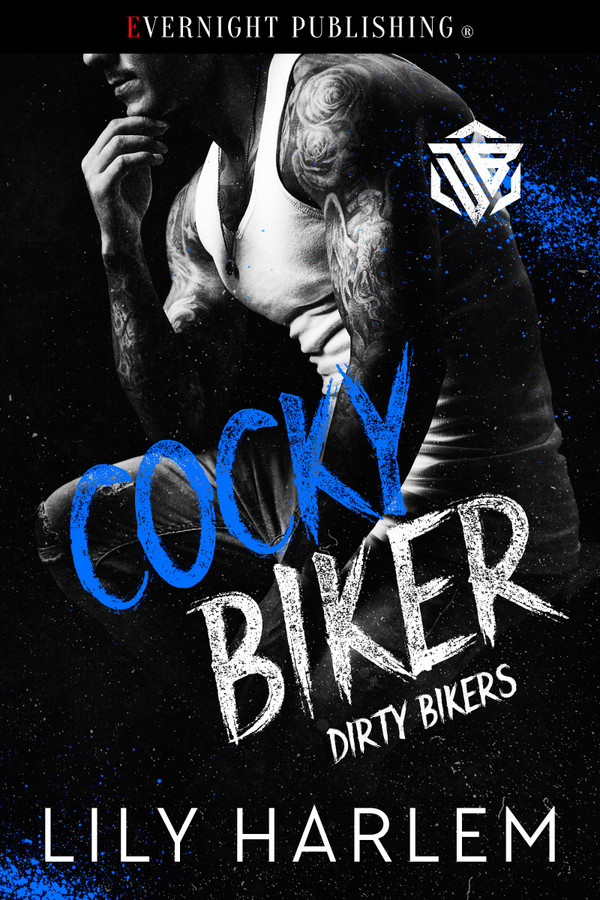 BELLE
Wyatt Jones is one cocky SOB.
Sure he’s hot. Sure he’s sexy as f…
But those cheesy chat up lines!
Am I really going to fall for them?
Fall for him?
I guess when he shuts up and gets down to business I could be persuaded.
Especially when he’s so damn good and being really freakin’ bad.

WYATT
Belle Travis is a vision, a curvy sent-from-the-heavens goddess.
And I want her from the first moment I see her.
I have to have her.
And do I give a toss about her beefed up bodyguard and over protective brother?
Hell no!
I’m gonna give her the ride of her life, fulfill her fantasies, and show her there’s still good guys out there.
Even though most people would say I ain’t one of them.

“So should I have asked Rigor before I bought you a drink?” The right side of his mouth tilted into a half smile as he leaned in.

“No!” A presence loomed at Belle’s side—tall, dark, and very close. “But you should have asked me.”

Her heart did a stupid little flip. He was so damn hot. Everything she remembered and more. He’d scraped his hair back with his shades and a few locks had fallen forward. His lips were a tight, flat line, and his eyes narrowed.

“And you are?” Malc asked, raising his eyebrows.

“She’s with me.” Wyatt slid his arm around Belle’s shoulders, tugging her flush against his hard body.

“You heard the lady.” The amused look in Malc’s eyes had quickly been replaced by irritation.

“Stay out of this, bro.” Wyatt flicked his head to the side. “And give us a minute.”

Wyatt turned to her. “She must have forgotten that she belongs to me.”

“You were AWOL, Wyatt, so yeah, I’d forgotten about you all right.” She folded her arms. All the burning anger from the last week was getting ready to spew out of her in a torrent of fury.

“You said you’d call, asshole,” she hissed the last word. “Yet you’ve had your phone off all week. Dick move if ever there was one. Just turning the damn thing off entirely.”

“It wasn’t off, it’s fucked.” From his pocket, Wyatt pulled out a mangled cell with the screen smashed to bits. He held it to her face. “Goddamn Mexicans fired at me, that goatee son-of-a-bitch. Hit my phone.”

A sudden wave of panic went through her. “Did he hit you?”

“No, just the damn phone got wrecked, so give me a fucking break, woman. This is why I didn’t call.”

Malc jabbed a finger at Wyatt. “And this is why I’m single. Always a fucking drama with chicks.” He shook his head and retreated into the crowd with his beer.

Belle glared at Wyatt. He raised his eyebrows, a grin playing with his lips.

That just made her madder. “Get off me.” He’d put her emotions through hell. How could he just brush that aside and think his cute smile would win her over? “And you couldn’t have borrowed someone else’s to call?” she demanded.

“You could have found it out. If you’d really wanted to, that is.” She slipped from the stool, grabbing her purse as her heels hit the floor. It was too hot. She was too hot. Sweat peppered her underarms, her sternum, and her scalp. “Get out of my way.”

To her surprise, he moved, and she stumbled forward in the direction of the exit.

Pushing through bikers, she didn’t acknowledge anyone or look at faces. To her, it was just a sea of cuts and tats and loud conversation.

Once outside, she rushed to the right and into the alley between Champs and a deli that was now closed.

For a moment, she wondered if she might be sick, but she kept going, lurching and using the gritty brick wall for support. It was sharp on her palms, but she welcomed the sensation. It took her mind off the pain inside. The end of the alley was close. It was cooler, darker. Tears squeezed from her eyes.

How could Wyatt play with her heart like this? Had he forgotten it was barely held together as it was? Okay, they hadn’t been together for long, but she’d felt something. Something she hadn’t imagined. They got each other. She’d told him stuff, believed what he’d said about trust.

She was such a fool. Always had been, always would be.

“Belle!” His deep voice echoed between the buildings.

“Stay away from me.” She turned the corner and stumbled to the right. Found herself at a dead end. Her way was blocked by high wooden fences. A bench was pushed against one, an overflowing ashtray in the center of it.

“Damn it,” she muttered, swiping at the tears soaking her cheeks.

Wyatt appeared in seconds like she’d known he would. His breaths were coming hard and fast as he paced toward her.

“Stay away.” She backed up until her shoulders hit the brick wall. Her heart was thudding as he loomed bigger, taller. The sky was a wash of orange and red behind him and rendered him almost in silhouette as he approached.

“Don’t you ever fucking walk out of a bar on me again,” he snarled, a tone of voice she hadn’t heard him use before.

“So you get to make rules, huh, but not me.” She pressed her palms on his chest to stop him from physically pinning her to the wall with his body.

“Goddamn it.” He snatched her hands and dragged her arms upward, capturing her wrists in just one of his hands and jamming them to the brickwork.

Her body elongated, and she gasped, her breasts jutting forward, pressing against the low-cut dress. “Wyatt!”

His face was so close to hers, his eyes flashing.

“Let me go.” She squirmed, but it was no good. He held her captive.

“I couldn’t call you,” he said, his jaw tight as he’d spoken. “But that doesn’t mean I didn’t think about you. Think about you every damn minute.” He paused, and his nostrils flared. “Hell, I had to jerk off every morning in the shower just to get through the day without a hard-on.”

She glared at him, trying to find the truth in his words.

“Thinking of you,” he went on, “remembering being inside you, touching your fucking hot body and sexy tits.” He set his hand over her right breast and squeezed. “Made me like a dog on heat.”

She gasped. A tremble went through her, starting in her chest and radiating down to her pussy. She pressed her legs together.

“I just wanted to be with you,” he said huskily. “Counted the fucking days until I would see you at the rally.”

“I don’t believe you.” She tilted her chin. Her breaths were coming in fast pants.

He paused then. “Are you sure?”

“Yeah, I’m sure. I’ve had pricks say they care when they don’t. Old news.”

His mouth hit down on hers. It was a wild, desperate kiss that stole her breath and had her pussy clenching.

He slid his hand into her neckline and gripped her breast. His fingers were cool on her hot flesh.

She groaned. So did he.

I do want him.

“Next time,” he said against her mouth, “have some damn patience when you know I’m on club business.”

She yanked at her arms.

He kept them held tight. “You’re not going anywhere until…”

“Until what?” She glared at him.

“Until I’ve given you an orgasm to fix this … misunderstanding.”

Wyatt is definitely the cockiest biker when he meets Belle for the first time and pulls out all the stops to flirt with her. I liked that they had an easy banter yet funny moments to balance all the heavy stuff with the mc surrounding them. I received a free copy of this book via Evernight and am voluntarily leaving a review.

I can&#039;t say enough how much I loved Wyatt and Belle together. The images of them with the romance novels kept making me smile. Loved all the supporting characters, too ... just enough drama with the Mexican gang (I&#039;m all about low drama). I am looking forward to checking out more of the books in the series.

The California chapter of the Devil’s Barbarians needed assistance. Being fairly close, Rigor Travis volunteers to make the trek from Arizona to California to sit in on a meeting. Although females usually are not welcome, Rigor’s sister, Belle, is a secret weapon. She did not have a choice, but Belle really did not want to make the long drive. She would rather be home reading her romance novel. Wyatt Jones was making repairs to the chapter van when the Phoenix guys rode into the compound. He took one look and decided that girl was his. Little did he know, Belle had trust issues. She also had a couple of bull-dog protectors along that were not going to make it easy on Wyatt. But he was willing to take that chance. With some cheesy pickup lines, a near disaster, and some smoking hot sex scenes, Wyatt is definitely cocky. He also shows throughout that he is a trust-worthy person. Many women, including Belle Travis, would love a man like that. Fans of Lily Harlem and motorcycle club romances will love this quick read.

Belle lives with her brother at the Devils Barbarian compound since their father went to prison. Her brother takes her with him to another MC so that she can help them with a deal they are working on to purchase stuff. When they arrive at the compond Belle sees Wyatt and thinks he&#039;s good looking but shes cautious because she had her heart broken by her last boyfriend. Wyatt sees Belle and instantly desires her and will do whatever it takes to be with her. Wyatt and Belle have some hot chemistry together and decide to hang out together and things go from there. Wyatt is very determined to get Belle as his, but he&#039;s also got a carefree way about him. Belle is confident in her looks but is also cautious and practical, but enjoys reading romance novels. This book has some action and violence but not too bad for a MC book. No mystery or cliffhanger we get a happily ever after. This book is part of a series but can be read as a standalone.

Wow! I love this book. I recommend reading it with a tall glass of ice water and a fire extinguisher nearby. It is that hot. This is a contemporary romance that&#039;s just bursting with sexy goodness. It&#039;s a suspenseful, fun, and sexy story with some funny moments. I love how Belle and Wyatt banter. Normally I don&#039;t read motorcycle gang romance, but for Lily Harlem I made an exception. Yes, there&#039;s some violence and illegal activities. There&#039;s smoking and drinking. Somehow the story doesn&#039;t get mired down with the dirty business, although it is a significant part of the plot. There&#039;s so much romantic and steamy stuff that I had no problem reading the whole book. I thoroughly enjoyed the fun role-play scenes, as well as the historical romance books and their scenes within the scenes. Whether Wyatt and Belle are having fun with the Duke and his naughty maid, or the Prince and his wife, these two are fantastic together. I think I love this story so much because it doesn&#039;t take itself seriously.