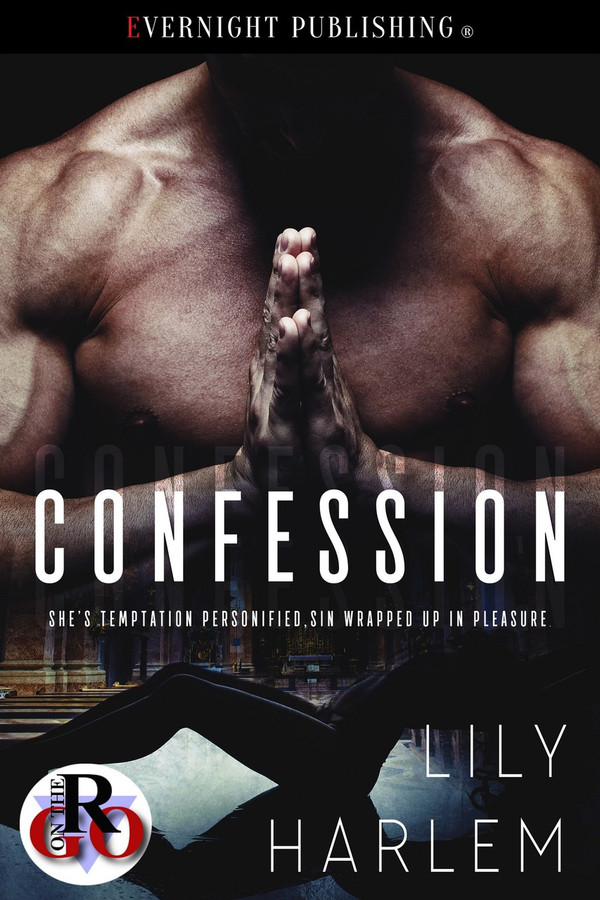 When Reverend Mark encounters a beautiful woman in his new congregation, he can’t begin to imagine what secrets and desires will be revealed when the church falls silent. Because Clara is no ordinary member of the flock. She’s temptation personified, sin wrapped up in pleasure. Living his Earthly life without her at his side isn’t something his heart or soul can contemplate.

“Of course, one day. A garden would be heavenly.”

He smiled at her use of the word. “I can imagine you growing prize roses and cultivating a vegetable patch full of tasty, nourishing treats.”

“How did you know that’s what I wanted to do?”

He studied her face, doused in shadows. “Because I do know you, remember.”

“It’s been such a strange day, to see you again,” she said quietly.

“Are you calling me strange?” He tipped his head and smiled.

“No, of course not, I think you’re…” She touched her fingers to her lips, as if holding in words.

“You think I’m what?” he asked, curiosity getting the better of him.

“I think you’re off limits.”

“This.” She flicked her hand between them. “What we had … it’s over.” Pain flashed in her eyes, and her bottom lip trembled.

Mark could stand it no more. It was the word over that hit him like a punch to the chest. It snatched his breath away. Reaching for her face, he cupped her cheeks, pulled her near and set his lips over hers.

She gasped, her body tensing, but she didn’t fight him as he probed his tongue into her mouth.

The next thing he knew, she’d wound her arms around his neck and aligned her body with his.

He held in a groan, his abating erection springing back to life.

Clara was everything he remembered and more. As a girl, she’d captivated him; as a woman, she’d ignited his passion and pushed everything in his life to one side, including God.

She ran her fingers into his hair. Tangled her tongue with his.

Mark was giddy with longing. He pushed her backward, against her door and ran his right hand down the side of her torso, to her ass.

Quickly she lifted her left leg and wrapped it around his thigh.

He tilted his head, deepened the kiss, and ground up against her. If only they were naked right now, he could plunge deep. Do what he’d wanted to do all that time ago. Act out the things he’d dreamed off and finally find fulfilment.

She tore her mouth from his. “Hang on, my key. We can’t … kiss … here.” She was breathless as she dug into her bag.

Mark stepped back, his lips bruised and tingling, and his arms empty without her in them.

She pulled out her key and turned to the door.

Now what? He was going to go in there, to her flat and they’d have sex outside of the confines of marriage? A sin he’d promised himself never to commit.

But this is Clara. You’ve gone most of the way there with her anyway.

But that was before you committed your life to His work.

He had an angel on one shoulder, the devil on the other. His head spun. His emotions were at war with the needs of his body.

Clara opened the door and stepped in. She slung her bag to the side and faced him.

He stood stock still, his feet frozen to the floor.

“I can’t.” He shook his head as his mouth dried and his throat constricted. “I’m sorry, Clara, I don’t know what came over me.”

She pressed her lips together and tilted her chin up. Wrapping her arms around her torso, she nodded. “Of course, I’m sorry, too.”

“No, you have no reason to be sorry. That was my fault, I shouldn’t have…”

“Done what every fiber in your body wanted?”

“Well we have, and it seems our lives are to be running parallel.”

“I agree, and that brings great joy to my heart.” He pressed his fist to his sternum.

“But makes you uncomfortable somewhere else, huh?” She glanced at his groin.

“I, er…” He didn’t know how to respond to a comment about his cock. It wasn’t something usually brought up in conversation.

“It’s perfectly fine. You’re married to God and the church, and there’s no room for a woman in your life.”

“But it’s what you’re trying to say.” She reached for the door. “Good night, Reverend Mark. God bless.”

He was left looking at the red door, the echo of its slam ringing in his ears.

After pushing his hand through his hair, sighing deeply, he turned and slowly made his way back to the concrete steps. Part of him wanted her to open the door, beg him to go in. The other part of him was grateful she’d been strong and stopped it going any further.

Because if he’d kissed her for another few seconds, her sweet body seducing his and erasing all thoughts of the Bible’s teachings, he’d happily be getting sweaty and naked with her right now. Sod the price he’d pay, the dent in his faith and conscience. It would be worth it to have Clara as his, in his arms, in his bed. Even if it was just once.

You don&#039;t expect to find a face of beauty staring back at you when you are being introduced to your new congregation, but this is exactly what happens to Rev Mark. He is instantly struck how beautiful the woman is and then realises that there is something very familiar with her. Can Mark stay focused on his new role, or will he be tempted into sin by this beauty?