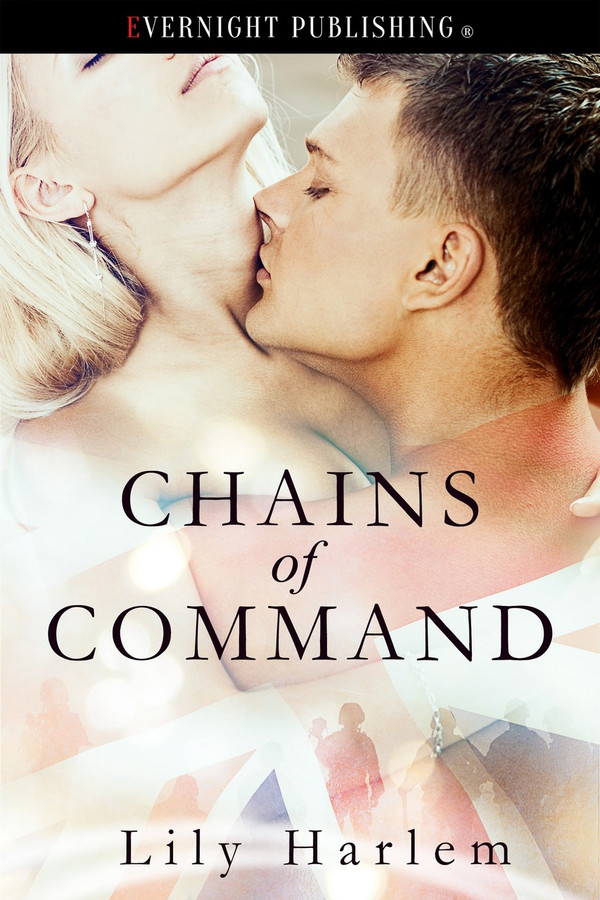 Jenna Barlow wanted a quiet night before she headed out to a war zone, but a tall dark handsome stranger had other ideas.

And what a night—the phrase ‘swinging from the chandeliers’ came to mind. So why the heck doesn’t he ask for her number the next morning? Did he not have fun? It had sure sounded, looked, and felt like he had.

Her irritation can’t last long, though, she has duties to attend to on the battlefield, lives to help save, and a team who is relying on her. So you can imagine Jenna’s surprise when the memories from a night of passion burst into her life, and she has no choice but to obey the chains of command and respect rank, no matter how hard that is to do.

For a moment Jenna wondered about telling him she wasn’t a one-night stand girl, which was the truth, or they’d have to have a few more dates before she climbed into bed with him. But with her tour starting the next day there wasn’t time for more dates, and she was living very much in the moment.

He smiled, a sexy-as-hell grin that did funny things to her insides and injected lust into her bloodstream. “I promise I’ll make it good for you,” he said, in a low, husky murmur.

“Seems to me you’re a man who does everything well, so I’m sure you won’t disappoint.” She adored the sassiness he was bringing out in her. The way he made her feel sexy and in control.

“Babe,” he said, nipping her chin between his thumb and index finger. “Forget everything you thought you knew about sex, because I’m going to ruin you for all other men.”

The way he looked at her, his dark eyes flashing and the shadows slicing over his handsome face, had her believing he was about to do just that. And the sooner he got started the better.

Seeming to have the same sudden sense of urgency, he slipped back into the pub.

She wrapped her arms around her waist. She was cold without him standing close.

A car drove past, its tires hissing on the wet road, and in the distance a dog barked. She’d miss the sounds of home when she was in the desert. She’d also miss the English air, it wasn’t laden with dust, didn’t feel as if it had blasted straight out of the oven, and held so many familiar scents.

Deep voices came from the bar area, and she turned to the door as Seb opened it. He held up a single silver key. “They’ve got a free room.” He paused. “You sure?”

“Seb, I’m an independent woman and this is the twenty-first century. Yes, I’m sure.”

One side of his mouth tipped into a smile. “My mother taught me to double check, she said that’s what gentlemen did.”

He slipped his arm around her waist and tugged her back into The Dog and Duck. He set his mouth by her ear. “I’m not sure if she’d be proud of all the deliciously filthy things I’m thinking about doing to you right now.”

“So stop thinking and act on them.”

He kind of groaned as they stepped past the table they’d been seated at.

The barman was locking the till. “Right up that set of stairs,” he said, nodding at a door at the far end of the room. “Then it’s the second room on the left. Breakfast at eight.”

“Thanks,” Seb said, urging her along.

Jenna wondered if she should be a little embarrassed that the barman knew she’d been picked up, that she’d allowed herself to be persuaded to get naked in just one evening. But she suppressed that emotion. Seeing some of the things she had, in her training and in the Middle East, made her realize there was no time for negativity, and plenty of time for following her instincts.

And right now, her instincts were primitive and lustful. Something deep inside had taken hold and the sooner she started satisfying the need swelling in her, the better.

The stairs were covered in the same nasty carpet as the bar, as was the short corridor on the landing.

Seb paused outside a green door with a wonky number two nailed onto it. “It’s not going to be The Ritz,” he said.

“I’ve never been to The Ritz so I wouldn’t know.”

He chuckled. “Me neither, but a soft, safe bed is the same, no matter what room it’s in.”

He pushed open the door.

Orange light from the streetlamp level with a large sash window poured into the room. A double bed with a pale eiderdown sat against a flowery-papered wall and had small bedside tables either side of it. A door to the right was slightly ajar revealing the white tiled floor of the en suite.

Jenna set down her bag and turned to Seb. The moment she looked at him she knew his instincts were every bit as lustful and primitive as hers.

He cupped her face again and stepped her backward until her shoulders hit the wall. His eyes flashed and he slanted his head and kissed her.

Gripping his thick forearms, she kissed him back, giving as good as he gave her and swiping her tongue over his. His stubble abraded her chin and he tasted of red wine, dark desires, and man.

Damn. It had been so long since she’d enjoyed the taste of man.

This was my first time trying this author and I loved it! Story starts with a one night stand but quickly became more. War time was dramatic and realistic. May have been a almost insta-love but wonderful and sexy. Shorter than I would have hoped but good all the same.

This was my first time trying this author and I loved it! Story starts with a one night stand but quickly became more. War time was dramatic and realistic. May have been a almost insta-love but wonderful and sexy. Shorter than I would have hoped but good all the same.