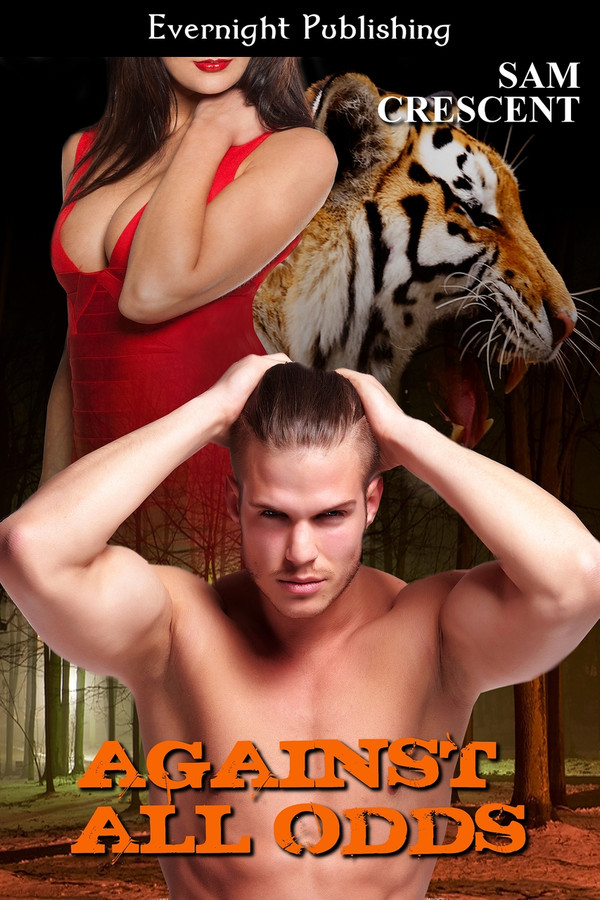 One mistake that could cost him his mate.

Ben is a tiger shifter, from a line of possessive, dominant, and controlling men. They cannot bear for another to touch their woman. He’s never imagined having a woman of his own, but in the most unlikely person, he finds his mate.

Heather has known about shifters, and she’s best friends with a leopard shifter. On the night of a barbeque she gets a shock of a lifetime. She’s the destined mate to Ben, the guy her best friend wants so desperately. What can Heather do but refuse, for her friend’s sake?

Emotions are running high, and Ben attacks Heather when he loses control. Afterward, there’s nothing he can do but wait it out. How can Heather fall in love with the man who scarred her? Against all the odds and with time, Ben hopes to recapture what he’s lost. Without his mate, there is no future for him. But can Heather be strong enough to love him? And would her friend ever forgive her for walking away?

Frowning, he started up the stairs careful not to make a noise. Was there another man here? No, Heather was not the type of woman to take on another man when she had him.

Taking the steps two at a time, he stopped as he went to her door. It was open showing him exactly what she was doing.

There was no other man, and he felt like a total bastard for thinking there was. He really needed to get his trust issues under control.

He stood frozen watching as her fingers worked between her creamy slit. Her legs were wide open, and his vision was perfect. He saw how wet she was. Her cream was dripping down to the puckered entrance of her ass.

Heather was thinking about him?

Her arousal filled the room, drifting toward him. His mouth watered. She would be perfect and sweet.

“Please, more,” she said. If she was vocal while finger-fucking herself, he wondered what she’d be like when he finally got his cock inside her.

Shit, he needed to stop thinking about this.

Ben watched her fuck two fingers inside her cunt. Rubbing his cock through his jeans, he couldn’t turn away. He should back away without looking at her. The sight was more than he’d ever hoped for. She still wore her bed shirt while her pants had been thrown off the bed. Her creamy thighs were spread. It would be so easy for him to walk toward her, settle between her legs and take her.

She’d be tight and hot.

He couldn’t handle it anymore. The jeans were too tight, and it was hurting him to keep still.

Unbuckling his belt, Ben pulled his erect flesh out of the confines of the jeans. The tip was already slick, and he stroked the length, coating it with his natural lube.

Ben saw how close she was. He witnessed the tightening of her ass and pussy as she brought herself closer to the edge.

Her cries erupted seconds later, and he saw her cream flow out of her. She was so fucking beautiful. He wanted to drink from her.

Pumping his shaft, he froze as her eyes landed on him. She sat up.

“Ben?” She spoke his name, and he detected the shock in her voice.

Feeling like a pervert, he pulled up his jeans. This was the last thing he’d ever wanted. “I’m sorry,” he said, feeling like a teenager being caught with his pants down his ankles.

“Don’t. Stop.” He paused as she came off the bed and toward him.

Both hands were tugging up his jeans, but he stopped to watch her move. Her pussy was covered by the tails of her shirt. He’d give anything to have her naked.

“Do you want to?” Heather asked.

“What?” He was losing himself. He was supposed to be the one in control, and yet he was stumbling over everything. Even after her orgasm, Heather smelled like pure, unadulterated need.

“More than anything.” He answered her without holding anything back.

She reached up presenting her fingers to his lips. “Do you want to taste me?” she asked.

Heather has been invited to a BBQ. It is mainly only shifters but Heather was raised with a family of leopards and feels more comfortable with them then she does her parents. She wasn’t looking for a man and didn’t want one after what happened to her in college. She was enjoying herself when her friend Dana brings in her date Ben. Ben is just wanting a little fun with Dana and goes to the BBQ with her. He never expected to find his mate when he walked in. He is told that Heather will think that she is trying to take over Dana’s man. He knows he has to have her and there are no options of him leaving her alone. No one knew that his tiger would be so obsessive. When she tries to get away from Ben his tiger see’s red. What happens is really bad and she never wants to see Ben again. At first you wonder if you will like Ben. He wants sex and that is all. He says that a shifter knows what they are doing and it’s just about sex. He changes his mind when he scents Heather. I knew that Ben would be into a hard time getting Heather to trust him when he does what he does to her. As the story went you see each character change for the better. There’s so much of a connection with them and just because she’s a human doesn’t mean anything. By the time I got to the end of the book I was really into the story. I hated to know that I was almost done. I do know that there is another book after this one and after reading the end of this book I really want the other book. I have read several books by this author and when you open the books and start to read you are in for a real treat. Every book is different and you know there will be an alpha that will want to control the female. Good thing that the females can take them and can take care of themselves.

What I really enjoyed about this book was the believable way that the author showed us how Ben managed to redeem himself in Heather&#039;s eyes, and make both Heather and the reader forgive him without making Heather seem weak or gullible as a result. I love a good shifter romance and the great characterization of this novel meant that instead of Ben being portrayed as an irrational overly aggressive male, he became understandably vulnerable and most importantly lovable. I like that this is a little out of the ordinary, but a lovely romance.

Heather Howard grew up knowing about the shifter community after all her best friend Dana Ashton and her entire extended family are panther shifters. When Heather attends an Ashton family Bar-B-Que Dana introduces her to the man she is interested in, a tiger shifter named Benjamin Bryce. Ben is thrown for a loop. In his forty years he has never looked for or wanted a mate and suddenly she is there, Dana’s best friend, Heather. His tiger is pulling at him to claim her, but he senses that Heather wants nothing to do with him. Dana is like a sister to her and she will do nothing to hurt her even if she is drawn to him. When Heather rejects Ben his tiger lashes out and severely injures her leaving her fighting for his life as he fights to control his tiger. Now he must prove to her he has control and she is his mate, but Heather is afraid of him and doesn’t trust him. Ben is in for the fight of his life. Can he win her back? Sam Crescent takes her time building this story and the characters. They are all well rounded and very believable. You will feel their emotions and share their hopes. Against All Odds is only the first in this new series but like me you will be avidly awaiting any and all future offerings. I want to know Dana’s future as well as Felix’s. I want to get to know more about Malcolm and all the other shifters. You like myself will be drawn into Sam Crescent new reality and will it be fun. Thank you for such a great read.

Heather is aware of shifters and considers her best friend&#039;s family as her own. She is shocked when the man her best friend has her eye on insists she is his destined mate. Ben never thought he would have a woman of his own, but he discovers her at a shifter friendly barbecue. His plans of spending time with one woman went out the window the moment he met Heather. Ben is a tiger shifter whose family line takes possession and domination to extremes and attacks Heather when she denies him and he loses control. Can Heather ever forgive Ben for the scars she now carries; and if she is unable, is she willing to face the consequences of her rejection? I found the story of Ben and Heather fascinating and unlike any shifter story before. It was interesting to see the twist of one who wishes to protect his mate above all others become the very weapon which harms. There are twists and turns with every page and I was unable to put the book down for even a moment. The writing of Ms. Crescent is truly sublime and provides the reader a new twist on shifter romance. I highly recommend Against All Odds as I am a new fan and release date stalker of the Shifters Series. - See more at: http://coffeetimeromance.com/BookReviews/againstalloddsbook1bysamcrescent.html#.UpidC-jnZdh

This book is totally different than what I was expecting, but it was so great! Ben proved what a great guy he was and Heather took a chance on Ben. Ben helped Heather realize that things aren&#039;t always as they appear like her parents. It was a great story and I am looking forward to seeing if Dana can find her mate.