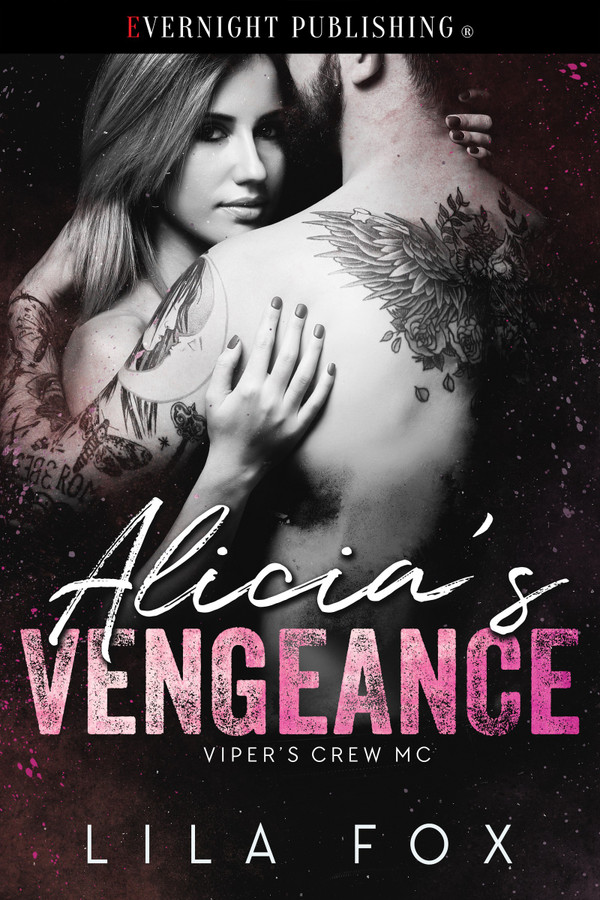 Alicia’s every thought centers on killing the people who tortured and murdered her sister. It’s a death sentence to seek vengeance on the MC, but at this point, she doesn’t have anything else to live for.

Stone is shocked to learn the person he saved from the Black Demons’ wrath is a beautiful woman. He never would have guessed Alicia is capable of killing anyone, but she has, and she has no plans to give up on her search for justice.

It’s so easy to fall for the pretty woman, but he’s never dealt with the tender emotions she inspires in him. When he finds out she has run from him, headed to finish what she started despite promising she’d stay put, he worries he’s lost her for good. He’s not ready to surrender to this feeling of despair. But what if Alicia’s actions cost him everything?

Alicia closed and locked the bathroom door, leaned against it, and closed her eyes. She’d never been this tired in her life, but she reminded herself she’d get plenty of sleep when she was dead. So, suck it up. She wasn’t able to function well anymore.

Some of her exhaustion was from lack of sleep and not eating, but the grief was like a dark cloud that surrounded her and made it hard to breathe at times.

After she shed her dirty clothes, she jumped into the shower. She had to scrub her hair and body twice to get the dirt off. When she finished, she wrapped the towel around her body and used the other to press as much moisture out of her hair as she could.

She found a new toothbrush, paste, and even lotion.

Within twenty minutes, she opened the door with her dirty clothes in her arms, wearing his shirt, to find him leaning against the wall with his arms crossed over his massive chest. Fortunately, he still had all his clothes. He was so damn sexy, and she knew it would get worse the more of him she saw.

She nodded. Her hair was dry, and she felt cleaner than she had for a long time.

She set her clothes aside.

He lifted the blanket. “Get in.”

“Where are you going to sleep?” she asked before coming toward the bed.

“With you. I don’t trust you not to run if you get the chance.”

He sighed and dropped the blanket. “I know that, but this suicide mission you’re on is fucking crazy.”

“Yes, but you’re thinking with your grief and anger. There are other ways to destroy the Black Demons without sacrificing yourself.”

She crossed her arms over her chest, trying to hold her emotions at bay. “Listen, she was the only one I had left in the world who gave a fuck about me. We took care of each other when both our parents were killed in an accident. Fortunately, Kelly was eighteen, and I was sixteen, so they let us stay in the house. We both worked while I finished high school, and she was taking classes at the community college. I worked full time and took a few college classes each semester after I graduated from high school. We planned to move to Denver. It was where my parents were from originally, but we wanted to be ready to start our new lives. My father left a nice life insurance, but we didn’t want to use it unless it was absolutely necessary. Now I wished more than anything we’d moved because our family is gone.”

She nodded. “I’m still breathing, but otherwise, I’m as dead as my sister.”

Alicia stared at him. There was no way in the world he could understand the desolation of her life. She didn’t feel anything but the need for vengeance. She never got hungry and only slept when she absolutely had to.

She had a few friends, but she shunned them even though they tried to reach out to her. They needed to get used to her not being there because she wouldn’t be. She suspected she’d be dead within the month.

He sighed and lifted the blanket again. “Get in. We’re both beat. We’ll talk more in the morning.”

“I’ll be gone in the morning.”

“Like hell, you will. If I have to chain your ass to me, I will. Give us a chance to figure this out. We can get you your vengeance without you dying.”

She crawled into bed and scooted over to the far side.

“I’m going to shower. Don’t try to run. I’ll have a man outside the door.”

She just nodded and watched him leave. She hadn’t planned on running. She could already feel the veil of exhaustion lowering, and she was asleep a moment later.