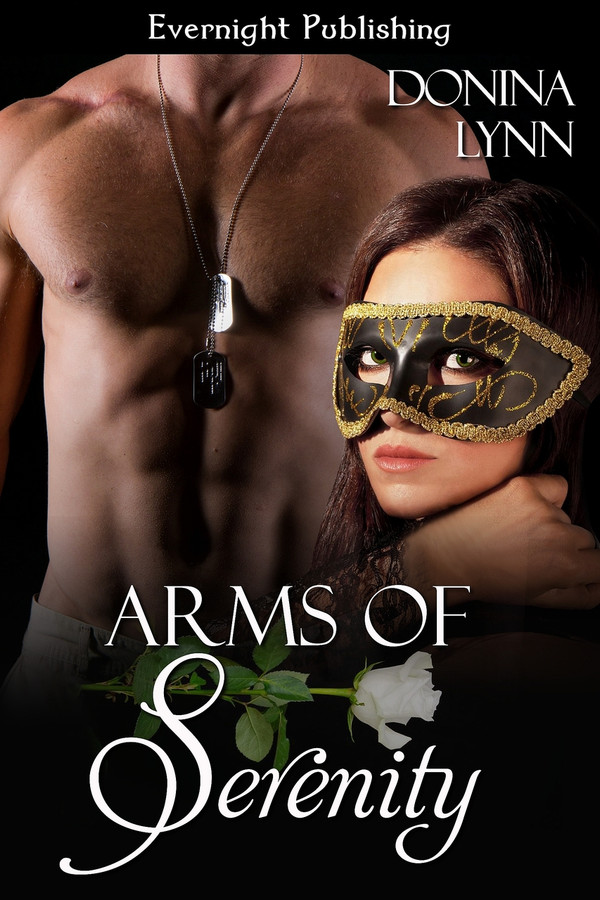 Plagued by guilt, Nicholas Hollsten ended his military career in the Special Forces and returned home only to be forced into a life he never wanted. Nick found himself running his father’s company and making good on a promise to his team. Angry and frustrated with the direction his life was taking, he calms his thoughts by filling his evenings and bed with soft distractions. Until one woman captures his interest.

Rebecca Klayton thought she was happy in her small town, running her bakery and avoiding love. That emotion only meant heartache and being left exactly where you started—alone. Lesson learned. But, when the sexy stranger from their hot New Year’s Eve party shows up at her counter, will she be able to ignore the temptation or will she find what she’s been missing in the Arms of Serenity?

Becca got as far as the curve outside before she heard Nick’s voice calling her name. She closed her eyes and groaned.

Why was he following her? Couldn’t he just leave her alone? She held up her hand to signal a taxi and hoped ignoring him would work until one stopped.

Becca heard him say her name again. Only this time he was too close to pretend that she didn’t hear him. She turned to find him holding the picture frame.

He just wanted to give her the frame. She sighed in relief and reached to take it from him.

He looked at her and put a smug smile on before saying, “You forgot these also.” He reached into his pant pocket and pulled out a glimpse of white lace material.

Becca gasped when she realized it was her forgotten panties. She got closer to put her hand out.

“Thank you for finding them.”

Nick pushed them back in his pocket. “How about that coffee?”

Becca took a step back and crossed her arms. “Are you seriously holding my underwear hostage until I go out on a date with you? Doesn’t that border on blackmail?”

Nick laughed. “Just using whatever means I have at my disposal to get you to say yes.”

Becca would laugh too if she wasn’t so angry. He was being an arrogant pushy ass. She glared at him. From his polished shoes, tailored pants, and what looked like a cashmere sweater, he was head to toe everything that Becca wasn’t. Why was he doing this? Damn him for coming after her. Damn him for wanting more when he could go back into the ballroom and have anyone of those models sitting at the table.

“You’re not my type.” She turned away from him and once again put her hand up in the air.

She stood there not wanting to look back. He hadn’t answered her, and Becca silently hoped that he had walked away. She was a mess. Her insides trembled at the conflicting emotions of anger and longing coursing through her. It would be so easy to give in and go with him.

“I’m going to have to argue that statement. I seem to remember being exactly your type last night as you shook and screamed in pleasure when I was buried deep inside of you.” He kissed the spot behind her ear, and she gasped in response. Shivers cascaded through her, and she leaned back melting into his body.

Dammit, Becca get some control! He’s just a rich guy who thinks he can get anything he wants.

Becca pulled away and turned around to face him as a taxi finally came to her rescue. Opening the door, she stood behind it to use as a barrier between them and took a breath to steady her trembling legs and gain some courage.

“Nick, last night was great, and thank you for not saying anything back in there.” She nodded her head in the direction of the hotel and continued. “But I’m just not interested.” She got in the cab, closed the door, and stared ahead as she gave the driver her destination. As the taxi pulled away, she could see him in the rearview mirror. For the second time in less than twenty-four hours, she left him just standing and staring after her.

Really liked the book. Moves fast with some great moments. The scene with the roses is so romantic! Great start for this author. Will be checking out more from her :-)

Six years ago Becca Klayton was in a car accident with her parents. Her father was killed, and her mother seriously injured. Becca lost the baby she didn’t even know she’d been pregnant with. Nothing has been the same for her since. Nicholas Hollsten has inherited his father’s business – but the office is as cold and emotionally bare as the man himself had been. Both Nicholas and Becca attend the same wedding reception (a Masquerade party) and the sparks fly immediately. A night of passion follows and despite their vow for it to be just the one night, as always there are repercussions in the morning. Added on to this, Nicholas’ side job as a security specialist for a very special firm have their first job from a CIA contact. Nicholas and Becca both have their plates full, and despite their struggles, they soon discover one night just can’t be enough. This is a well written and very well paced full length novel. It took me a few pages to really get into Becca and Nicholas’ characters, but once the author hooked me on each of their situations I couldn’t read this fast enough. I greatly enjoyed how the author has fleshed out the main characters properly. I feel the author has gone to great lengths to make both Becca and Nicholas deep, complex and interesting characters. With a strong supporting cast (and what I feel is a few hooks into future books, Tank in particular interested me greatly…) I found this to be a really engrossing story, one you can’t just pick up and put down, but need to dedicate time to really enjoy. There were a few really steamy sex scenes. While I wouldn’t classify it as erotica, it is detailed and nothing is held back. Romance readers who prefer their action sweet or behind closed doors might want to be cautious here. Even though I found the scenes graphic, I thought they were really sexy, tasteful and not at all outrageous. I was a little disappointed though with Becca’s about-face after the initial sex scene. I never really fully understood why Becca was perfectly content to be with Nicholas as a no-strings one night stand, but was so judgmental the next morning. She took one look at him and based on his appearance, his expensive, cashmere sweater (and admittedly his swagger) and decided that he was everything she hated in a man. Their sex the previous evening, the intimacies and discussions they’d shared – even the man Nicholas had shown himself to be sharing the rooftop garden and himself – was all forgotten in the blink of an eye. This really upset me as a reader, and made me strongly dislike Becca for a while. I realise that there needs to be conflict and tension between the hero and heroine, and aside from this one (albeit large) character flaw shown in Becca, I liked seeing them try to come to terms with each other and their attraction. One of the things I really enjoyed throughout the book was the fact that the plot and the romance each take equal amounts of the story itself. This isn’t a romance with a throw-away plot added in for form’s sake. Nor did I find this a thriller/mystery book with a brief, hasty “romance” to appeal to the women readers. I feel the author has done a great job to balance the two out. The secondary characters also weren’t just thrown in to flesh out Becca and Nicholas. I’m quite intrigued by many of them and hope to read more of them soon. Strong, complex characters and an interesting plot, plenty of spicy romance and a great side-plot with a hint of ex-Army men, there’s an awful lot to like in this book. Other than a few blips I greatly enjoyed this full length novel and can recommend it for many other readers.

Nick carries the wounds of battle. The burden of anger and guilt rules his world until he meets the one woman he wants to call his. One passionate encounter leaves Nick craving more. In Becca&#039;s opinion, love is a one way road to heartache. Love never lasts and she leads a small town life with little chance of disaster. One New Year&#039;s night changes her world and when that night walks into her small town bakery, Becca knows she is in trouble. Nick has a lot of regrets and the guilt is a heavy burden to bare. Just meeting Becca gives him a different focus, but eventually the past has a way of catching up with you. Can two emotionally scarred survivors overcome what came before and create something for the future? Arms of Serenity is a sweet love story with a little kidnapping and covert ops that add a thrilling ingredient. The characters form an excellent foundation for the story to unfold. The storyline and characters are a solid foundation for the beginning of the Rock Services series. There are plenty of avenues to be explored by Donina Lynn in the wonderfully romantic series of heroes and the women who chose to love them. - See more at: http://coffeetimeromance.com/BookReviews/armsofserenitybook1bydoninalynn.html#.UtK5uujnZdh