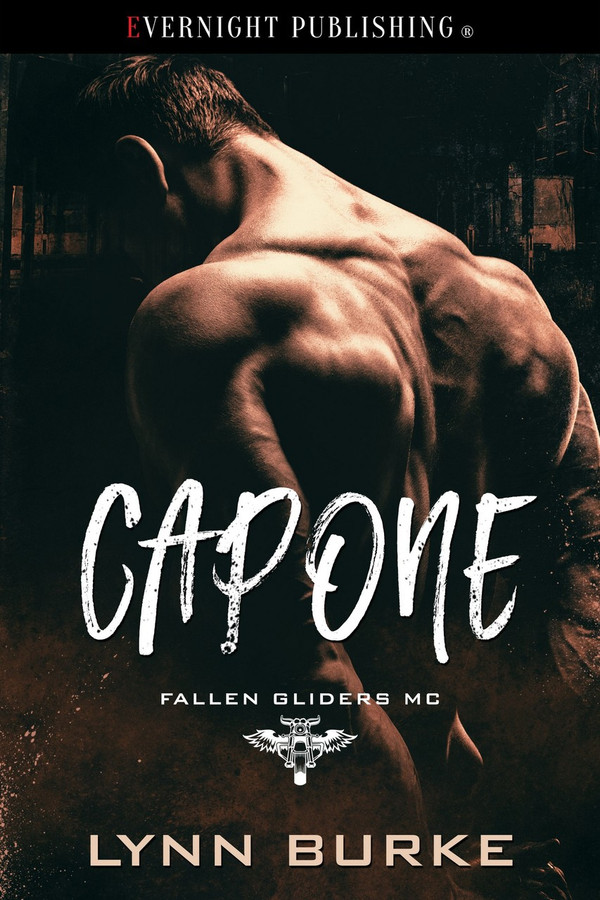 Being called a pussy and pansy-ass his entire life led Jeremiah “Capone” Caldwell to join the Fallen Gliders, a motorcycle gang known for its rough ways, hard partying, and womanizing. Not that he needs help with the last. His charming smile and baby blues make it easy to get into the panties of whatever woman he sets his eyes on.

Except for Helina Bodnar.

The sexy siren is a lawyer, an independent spirit who refuses to bow to someone like the narcissistic assholes from her childhood. Jaded, she judges Capone’s character by the “67” inked on his neck, and although her body wants to let loose with the attraction sizzling between them, she knows he’s no good for her. Giving into lust proves easier than denying sexual gratification, however, leaving one bitter and the other brokenhearted.

When a rat spills Glider secrets to the police, Capone knows there is only one woman who might be able to get them off the hook. Will he be the real man Helina longs for, the one he truly is inside, or will the man he portrays to the world lose her forever?

She unlocked the door of an office, but I didn’t pay attention beyond anything but getting her alone, somewhere I could give her what I’d denied her before she’d passed out in my arms the weekend before. Through a reception area that smelled like new furniture, through an inner office door, and Helina tossed her purse aside. She turned, but I stepped close, spun her around again, pulling her back against my chest.

I bent enough to slide my hand up beneath her skirt, my face buried in her neck.

I groaned in her ear while her pussy coated my hand with wetness as I cupped her. “Christ…”

“You had better deliver,” she said, pulling away.

The dimness of the office barely allowed me to see two large windows with heavy wooden blinds—closed to outside foot traffic—and a very large desk, half-covered with papers and boxes.

Helina hopped onto the edge and leaned back.

I didn’t need a verbal invitation, but dropped to my knees and lifted hers, placing her high heels on the edge of the desk. Her scent swarmed over me, and I leaned in for a deep breath.

The first slow lick from her ass to her clit had her cursing. The second, she grabbed at my hair, nails digging into my scalp. “Holy shit.” She gasped as I latched my teeth onto her clit and nibbled. “Oh…”

Smiling, I slid lower again, licking every crease, every indent of her body, lapping up the arousal slipping from her swollen pussy lips. Puffy and quivering, she was slickened enough two of my fingers slid into her tight sheath with ease. I curled my fingers and gently rubbed, finding the roughened spot that lifted her back off the desk.

“God, yes, right there.” She moaned and lifted her hips higher.

I pumped in and out a few times, soaking up the whimpers panting past her lips. She complained when I replaced my fingers with my mouth, but uttered another lust-laced curse as I shoved my tongue inside of her body.

Lazily, I meandered up through her folds again until my lips brushed over her clit.

“Fuck me with your fingers,” she said, holding my head tight to her.

Only too happy to oblige, I did as told, pressing in deep and rubbing that elusive spot.

“God.” A few curses spilled from her lips as I thrust and rubbed, my teeth nibbling away at the swollen nub, my nose buried in the trimmed hair atop her pubis. Tangy, soft, and sweet, her pussy was better than any candy or liquor.

“I’m going to come.” She moaned the words, her hips rocking up with every thrust of my fingers, her thighs tightening against my ears. Holding me still as if she could stop me from denying her again.

I slid my tongue up atop her clit a few more times, coaxing every last whimper from her lips. Her body released my fingers with a wet, sucking sound, and I licked both clean, inhaling until my lungs hurt. A kiss on the inside of each thigh, and I stood, my straining dick pressed between her lax thighs.

Helina sighed, and I cursed the darkness of the office. I wanted to see her face, her eyes. See the satisfaction, the bliss of a sated woman.

I placed my hands on her knees and slid them along the insides of her thighs, pressing between her skin and my jeans to rub my thumbs along my hard length. “You taste even better than I remembered.”

“And that was better than I expected.”

Grinning, I moved back, but she grasped my wrist before I could step away.

My brow shot up at her tone, but fuck if her bossiness didn’t twitch my already pain-hardened cock. “That a fact?”

“Mmm.” She sat and grabbed hold of me through my jeans, her grip bringing more pre-cum to my dick’s throbbing head. “There’s no way in hell you didn’t stash a few condoms in your jeans somewhere.”

Helina released me and sat back, propped up on her elbows. “Get one out. I want your cock in me.”

I bit back my brain’s “yes, ma’am” and offered a cocky grin even though she wouldn’t be able to see me clearly. “Ask nicely,” I said instead, fighting at the discomfort of the alpha male skin I’d been trying to live in for over five years.

I couldn’t see her glare, but sure as fuck could feel it singeing my face. “Sheathe that hard cock and fuck me.”

Capone says he does not care about his families rejection, but really it still hurts. He joined the Fallen Gliders MC for a family and now someone is threatening that. Despite past rejections he goes to his brothers wedding when he received an invitation. Good thing because he meets the strongest woman he has ever met and it surprisingly turns him on. Helina is happy with her life and does not need any complications of the male persuasion. She has never found a man who can not only handle but also be attracted to a strong woman. She will not be a doormat for any man, but for Capone she is willing to ride him for one night. When their one night goes sideways, Helina is determined she will get hers because she wants a piece of Capone. Capone had no idea a strong woman would be such a turn on, but for Helina he is willing to lie down and take it. Can two strong people learn to compromise, or will one late night phone call ruin everything? I absolutely love Helina and Capone, but Helina rules this story. The characters in the story are expertly portrayed and the book feels like a snapshot in time that makes the reader want to find out what came before and what happens next. Ms. Burke took a different slant than a traditional biker book because this one has feelings and is willing to let a woman lead every now and then which in no way dismisses his manliness. Give Capone a try and come along for a wild ride.

Can a Fallen Glider member and a sexy lawyer make a relationship work? Jaded lawyer, Helina, doesn&#039;t take guff from anyone and Capone is a good looking guy who has joined the MC to try and prove something to himself. One night together leaves both of them with different emotions. But wait......someone is talking to the police and telling club secrets. The club needs Helina&#039;s help. Will she help them? Will her and Capone get back together? Out of the other books in this series, I think I like this one best. Get it and see what you think!!