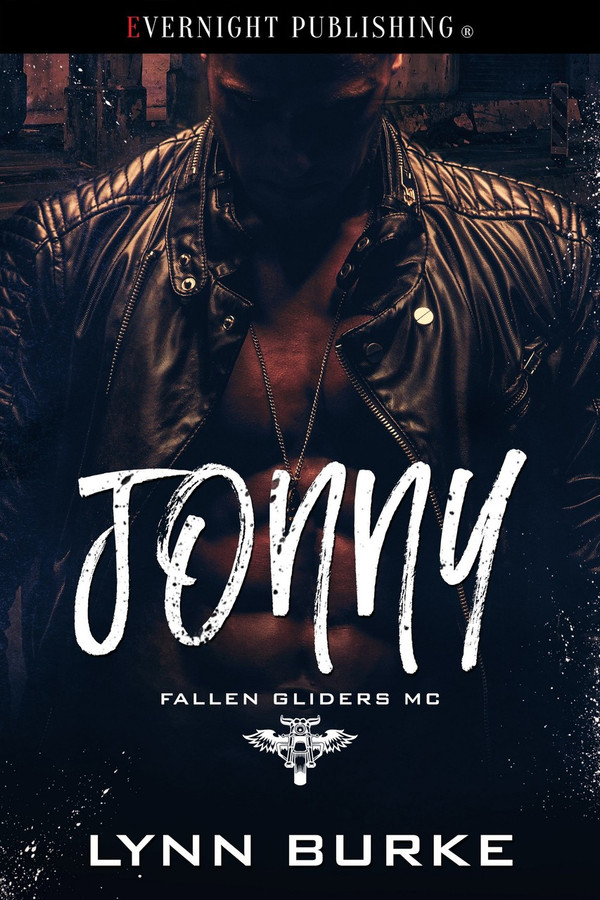 Jonny Hayes, president of the Fallen Gliders MC, can’t remember the last time a woman got him up or off. With the club under fire and an inside snitch spilling their secrets, the last thing he needs in his life is a curvy blonde on the run … even if she does make his hands itch to redden her sweet ass.

The law refuses to protect Alexa Thorne from her ex, a Silent Demon who thinks she’s still his property. Bruised but not broken, she runs north in search of her friend—and a safe place to escape—but instead finds herself surrounded by a rival gang. Vouched for and under the Gliders’ protection, Alexa refuses to let a man touch her again—even if their alpha president makes her body burn to submit to him.

Jonny vows to keep his hands to himself, but the undeniable pull between the two cannot be ignored. He’ll do whatever it takes to keep her safe, even if the consequences of his plan cost him his club, his brothers, and his freedom.

Hawk came through the front door, and my breath caught at the sight of the man behind him.

Damnit. My heartbeat kicked up a few notches, and my panties were done for, but my head. My head screamed retreat loud enough I questioned the wisdom of making “friends”.

Jonny’s gaze landed on my face, and I felt the scrutiny of his intense eyes across the kitchen.

Janie threw herself into Hawk’s arms, legs wrapped around his waist as she attacked his mouth.

Jonny glanced at the two of them sucking face, and turned back toward me, one eyebrow raised.

I found myself laughing beneath my breath and shrugging. “Guess they kind of like each other,” I said, my voice a little shaky.

“Guess so.” He slipped his leather jacket off his shoulders, and my mouth dried.

Nothing sexier than a ripped man in a tight, white t-shirt. While Jonny probably had a handful of years—if not ten—on me, the man sure as hell took care of himself. A few lines lay at the corner of his eyes, and gray hinted in the dark hair above his temples, but beneath his neck? He could have been taken for a twenty-something with the hard dips and valleys of his body. Black leather pants clung to every inch of him from the waist down, including the bulge between his thighs.

Saliva rushed back to coat my mouth, and I swallowed while ripping my gaze off him to focus on the carrots. My hand trembled, and I put the knife down, deciding there were more than enough carrots chopped for four salads.

“Hope you boys are hungry,” Janie said, a little breathless. “Want to go fire up the grill with me, baby?”

“Hmm.” Hawk hummed his agreement and grabbed a couple beers from the fridge.

I busied myself putting the carrots on top of the four bowls of lettuce Janie had readied.

“Be right back!” Janie giggled and scooted out the door once more with Hawk.

Jonny stayed behind, beer in hand, focus on me. “How are you?”

I had to swallow again from drool and nerves alike. “Better than yesterday,” I said, trying for a smile.

“Get some sleep last night?”

“Hawk told me you’re going to stay with them for a while.”

I nodded and moved toward the table to put the salads by each plate. The weight of Jonny’s stare kept my heartbeat thumping, my skin tingling.

“You’re welcome at the club.”

My attention shot toward him even though Hawk had already told Janie as much over the phone earlier in the day. Jonny swigged from his bottle of beer, dark gaze on my face while swallowing.

“Hawk says you’re good people, and I trust him above everyone else.”

Sudden tears filled my eyes, and I turned away to put the final salad on the table.

“Hey.” The warmth of his touch on my elbow stilled me. “You okay?”

A mere foot from me, the slight scent of soap, hops, and mint clinging to him weakened me in the best way possible. “Y-yeah,” I managed to say, but didn’t pull away from the first man’s touch I’d experienced without cringing.

Jonny glanced down to his hand still cupping my elbow and lifted his focus once more to my face, a question in his eye.

Temptation to lean into him, to accept the comfort he offered, played with my mind, and I stared up into eyes darker than the smoothest chocolate. Sexual energy charged between us, making it hard for me to breathe.

Jonny’s gaze flitted down to my lips, and I realized I’d licked the lower without meaning to.

His bottle clinked on the table as he set it down, and my breath caught again as he lifted his hand and brushed my hair back over my shoulder, his fingertips feather-light over the skin of my neck.

Goosebumps spread down over my entire body, and I shivered, completely trapped by his gaze and torn between wanting to close the distance between us and scurrying away to find a hole to hide in.

“You and your gorgeous curves are one temptation I don’t need right now,” he murmured, his focus dropping to my lips again, “but I sure as hell want.”

Alpha’s and MC’s, you really can’t go wrong! Jonny doesn’t get distracted by women, until Alexa. She’s running from a dangerous ex but the man who wraps his arms around her might be just as much trouble. I haven’t read the previous books in the series but I had no problem following along with the story. Alexa is a woman who needs help and my heart ached for her. Her ex is a bastard and won’t let her go. When she does find help, it’s from Jonny and the alpha is all sorts of sexy. I loved their chemistry together. It definitely heats up the pages! I do wish there was a bit more creativity and uniqueness with the world building. The ending is sweet and exciting and satisfying. If you like sexy men saving the day, then Jonny is a highly recommended read!

Lynn never disappoints in explosive chemistry. This is a hot, quick, and satisfying read.

This is book 5 in the Fallen Gliders Series and i have been waiting for Jonny&#039;s story. Just let me say, Ms. Burke did not disappoint! Alexa and Jonny are so hot together, make sure you have ice water and a fan nearby. For a short read it was packed deliciously with action and sexy times! Loved all the books in this series but this just became my favorite!