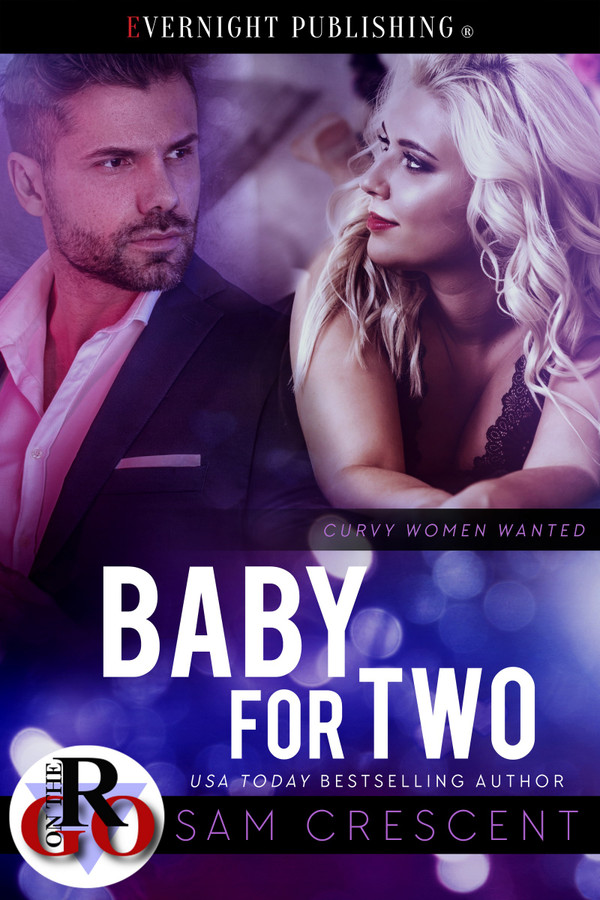 When two strangers meet outside a fertility clinic, sparks fly. Jared has always wanted to be a father, but the right woman has never come around.

Meredith has always been used to disappointment. A baby is something she can’t make alone, so going to the clinic is her only choice. The moment Jared sees her, he wants her, giving her an alternative option.

He wants this baby the natural way, so she’s going to have to sleep with him. And he wants to be part of his baby’s life. Meredith is willing to do whatever it takes, but she doesn’t expect to fall in love. But Jared isn’t the cold, heartless man she expected, and he makes her glow.

When his family tries to tear them apart, Jared vows to keep Meredith in his life. She’s the family he wants, and no one is getting in the way.

“You can’t mean that.” She licked her lips.

He’d noticed she did that a lot when she was nervous.

Closing the distance between them, he stood toe-to-toe with her. Her head tilted back, and he stared into her eyes. Reaching out, he took her hand. Without any warning, he placed it on his already stiff cock. Rather than hide what she did to him, he was going to be open and honest with her. “You see, that is what you do to me, Meredith. This has nothing to do with the baby, but all about me and you. I want to see you get naked. I want to fuck your brains out and to know what your cunt feels like on my dick. I bet you get nice and wet.”

“Not fucking possible.” He cupped her face, slammed his lips down on hers, and kissed her hard. He didn’t let up, didn’t stop. Just took what he wanted, and the truth was, it was never going to be enough, not when it came to this woman. She made him ache, and it had only been a week. These feelings were all new where it came to Meredith. He’d never lived like a monk, but those other women didn’t compare to his woman.

He relished the title.

Meredith, as far as he was concerned, was his. Every single part of her belonged to him. He was going to keep her and be completely selfish with her. No one else deserved her sweetness, only him.

When he slid his tongue across her lips, she let out a gasp and opened up to him, just how he liked it. Plunging his tongue inside, he met hers, tasting her, pressing his cock against her body. He ran a hand down her back, going to her ass and cupping the sweet flesh. The moment she moaned, he caressed up her body, aiming toward her tits. They were ripe, full, and his mouth watered for a taste of her.

The shirt she wore had way too many buttons. Gripping the edges, he tore it open and then pushed it down her arms. Beneath lay a crop top. He broke the kiss long enough to get it off her body and over her head. After tossing it to the floor, he held on to her hip, kissing her some more.

She moaned his name as he trailed his lips down her neck, sucking on her pulse.

Her tits beckoned him. He reached for the catch at the back of her bra and easily opened it. Her large, ripe tits sprang free and ready for attention.

Without waiting, he took a nipple into his mouth, flicking his tongue back and forth, hearing her moan and gasp as he did. He moved to the next bud, lavishing attention as he circled the button of her jeans.

He worked them down with ease as Meredith finally sank her fingers into his hair.

Meredith wanted to be a mother very badly. With no daddy prospects in sight though she finds herself in the sperm bank hoping to go it alone. While there she meets Jared, who had been visiting to try and find out how to go about hiring a surrogate mother. Jared felt an instant attraction to Meredith and considering they both want the exact same thing Meredith is finding it hard to say no to Jared’s outlandish idea. Grab a large drink, turn off your ringer, sit back and disconnect your brain. I found this to be a fabulously fun, albeit highly unlikely short story. Thankfully I didn’t need or expect realism, logic or real life when I picked up this quick read and so I adored every minute of it. Meredith and Jared are strangers – that’s why she doesn’t initially know he’s a multi-millionaire and in charge of his own company from an exceptionally large and even more wealthy family. Jared wants a baby and a family of his own and isn’t going to let pesky details – like the many compromises, problems, difficulties and small facets of conceiving a baby then raising it to adulthood – get in his way. They both want a baby and Meredith is attracted enough to Jared to let herself be talked into doing it the old fashioned way, in bed. Let the bedroom shenanigans and heart-wrenching emotion begin. Readers looking for a light hearted, fast paced and intimately graphic short story should find this an excellent read. I felt an immediate empathy with Meredith who I found to be relatable and somewhat sensible and practical. Jared was one handsome and smooth-talking hero and while I didn’t warm to him immediately in the same way I did Meredith I did enjoy him and found myself really growing to like him as much as I initially hoped for. After the first few pages I realized I needed to leave realism and logic at the door but the lack of logic didn’t detract from my enjoyment of the story once I embraced it. Meredith and Jared were interesting and vibrant characters, the situation they found themselves in (crazy as it was) was something I feel most people could understand and relate to. Add in a bunch of chemistry and a real and honest desire to be parents and this was a fun and enjoyable read.

This is another book in Sam Crescent&#039;s Curvy Women Wanted series and it doesn&#039;t disappoint. I LOVED it but wish it was longer. Great story with a bit of drama but the story flowed great!! Must Read!!

Meredith and Jared just happen to want the same thing, a baby. Luck just seemed to be in their favor meeting in front of a sperm bank. This is another quick romance with two people that just want to find that special someone and have a family. They both have all their “ducks in a row.” Jared’s family is a piece of work. They are cold and cruel. Jared shows he truly cares and loves Meredith. This was a great feel good story. Helpful

The Curvy Women Wanted series has a brand new addition, and I couldn’t be happier! The author took us on the journey to find a family and it really was fantastic, and realistic, and oh so sweet. As always, I love the characters. They come from entirely different worlds, but are both so wholesome and ready for the next stage in their lives. And I love how he is not willing to let anything stand in the way of his HEA. She takes a little more convincing, but that’s what makes the story so great. This was a fast and wonderful read, and I’m looking forward to the next installment.

Sam Crescent continues to be one of my favorite authors! I love her romances in the Curvy Women Wanted series! They are short and sweet and always super hot! Always a one click purchase for me!

Another book in Sam Crescent&#039;s Curvy Women Wanted series and this one was great!!! Jared and Meredith both want a baby. She wants to go to the clinic but he wants to make the baby the old fashioned way. He&#039;s gorgeous and she just doesn&#039;t think he&#039;ll ever be &quot;the one&quot; for her. It&#039;s going to take some convincing but he&#039;s determined to show her that he wants her in his life forever. The story is a very quick read and the mild drama comes from his family, which he promptly takes care of! Loved it!! Helpful Report abuse