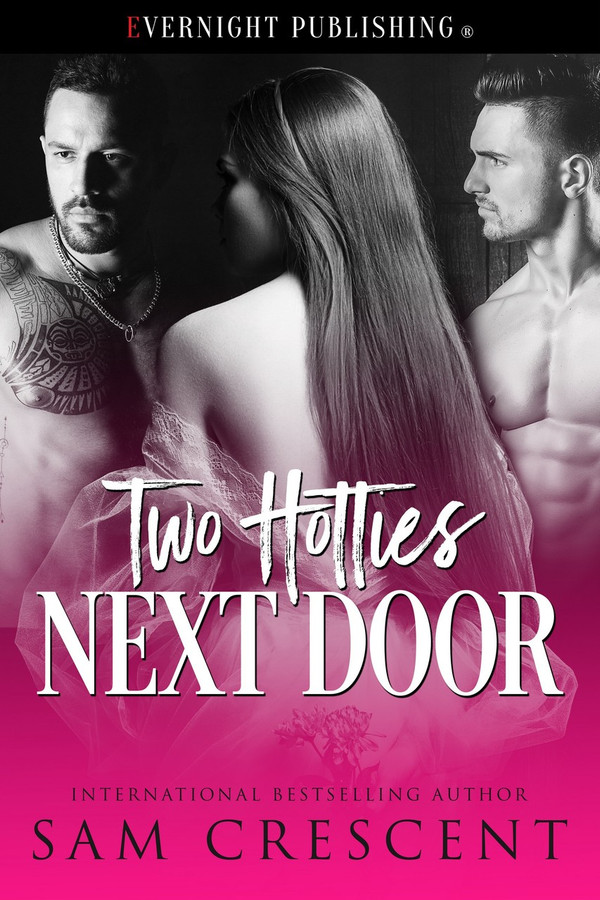 For three months, Ace has been completely obsessed with the next-door neighbor. His housemate and BFF, Brett, can’t get enough of watching her either. She’s a mystery they want to solve.

Meredith is an artist in a creative funk. For most of her life she has never conformed, never done what people expect, living her life her way. Her two sexy neighbors are the sweetest guys she’s ever met, and they do what months of relaxation have failed to do. Out of the blue, Brett and Ace become her inspiration, giving back her creativity.

Ace and Brett both want her, but being best friends, they have no intention of fighting over her. They’ll take her, together.

Belonging to Brett and Ace is new for Meredith, but what starts out as some fun soon changes as they each realize what they want more than anything else in the world. But will they have the courage to admit it, or will fear hold them back?

Meredith only wished it was that easy. She’d found herself thinking more and more about her two hot neighbors. Watching them, sketching them daily, her nights were filled with all the hot delights that a woman like herself craved and yet she was repeatedly let down with no follow-through. She was filled with constant need. Right now, her pussy was so wet, and it pulsed as she moved and the seam of the shorts grazed her pussy.

“Are you dating anyone?” he asked.

She stared at him. “I’ve never been good with these guessing games, Ace. Tell me what you want.”

He stepped closer toward her, the intent clear in his eyes. Her nipples hardened, and as he stepped close, his gaze was on her lips. She purposefully licked her lips, giving him a glimpse. The heat built in the room.

“Am I interrupting something?” Brett asked.

She didn’t turn to look at the other man, keeping her gaze on Ace the whole time. “No, you’re not interrupting anything.”

Again, she didn’t look away. There was no need to. “Is that why you zoned out? You imagined fucking me?”

“Yeah, I did.” He reached out, cupping her cheek. “And I want to, so badly. I want to feel your tight cunt wrapped around my dick.” He ran his thumb across her lips. “I want these on my cock, sucking me.”

She finally looked toward Brett. Both men were hot. Her “two hotties next door” was what she labeled the sketchpad that she was using to draw them.

“I guess I’ll leave you two to it,” Brett said, stepping out of the room.

“Why do you have to leave?” she asked.

Two Hotties Next Door by author Sam Crescent is a fun fast ménage read. I liked that these characters all work as a trio. No one is unnecessary and everyone is really distinct with their personalities. Ace: has been neighbors for about three months with Meredith. He has not introduced himself yet. But he cannot take his eyes off her stretching and sunning herself. Brett is a personal trainer. Good natured, honest, and very straight forward kind of person. Meredith: she is temperamental, artistic, and for the past year she has not been able to complete a computer project. She is eccentric and proud of it. Each person has something to give in this relationship. I really believe Meredith needs both men to have balance in her life. I really enjoyed this romance and cannot wait for more from this author in the future.

Sam Crescent takes fans back to two of the best properties around with this steamy contemporary romance. Ace was a personable fun guy and I enjoyed his almost obsession with his new neighbor. His relationship with his coworker and best friend was unique and they were indeed more like brothers. Brett seemed to be the more serious of the two. Meredith is definitely an unusual heroine. She is artistic with all the ups and downs that tend to go along with that personality. I enjoyed the fact that while she wasn’t close to her family she did have someone in her life who was More supportive than family. I liked how free spirited she was and her confusion over her feelings for both men. She never made excuses for her feelings but she did question the consequences or difficulties that could come with it. Ace, Brett and Meredith are a great combination. However, I will admit to not feeling as connected to them as I had to previous residents of the houses. This didn’t stop me from enjoying the story. I think I just have high expectations for this author. I mean I seriously love this author. If you&#039;re looking for a steamy multiple romance this is a great choice. The Story: Meredith has moved from the city to clear her mind and restore her creativity. She didn’t know the house she chose has a history, a history where neighbors end up falling in love. Can it be true? But which of her new neighbors will it be or could she possibly be lucky to fall in love with them both?

The magical houses struck again... Meredith is an artist and she just moved in wanting to find herself again and also hoping that a new place will help her create something new in her work. Ace and Brett also just moved in next to Meredith. And for some reason Ace can&#039;t stop watching Meredith. He&#039;s attracted to her but definitely can&#039;t be love. Brett doesn&#039;t want to admits to his friend that he&#039;s always been watching their neighbour and can&#039;t understand what the attraction is that he feels for her. All of them are so different from each other, but together they make a sexy awesome triad. I enjoyed this one. Meredith was definitely a free spirit, Ace was the funny one and Brett was the serious broody one. Definitely a Hot steamy combination

Another great story by the lovely Sam Crescent. A single artistic girl living next door to two hot guys that of course has to be a recipe for a happy ever after! What more could a girl ask for?!?

I really liked this menage story. I liked how Meredith was. Free spirit. Going after her dreams, even people around her don&#039;t support her choice. Loved how she had no problem diving into fun with Ace and Brett. She wanted it and she grabbed it. Or more correctly grabbed them. Lol. Ace and Brett a different, but that&#039;s probably what makes it work, not only for them as friends but with Meredith too. Each of the guys supplement each other and theirs triad. I enjoy these stories about two magical houses bringing people together. And I hope there will be more. This one is a 3rd book and while it&#039;s not a series and no need to read previous books (F*cker Next Door, Princess Next Door), I still recommend to do.

Princess Next Door by Sam Crescent

Hitman Next Door by Sam Crescent